Since I wrote about Innkeeper last fall, the then 28-year-old stallion has turned out to be a youngster compared to some of the other Secretariat offspring still out there. There is 31-year-old stakes winner Fast Market, and others in the 29-to-30 age range have also turned up. But it’s a safe bet that the eldest of them all is the remarkable General Poppy, who celebrated his 34th birthday yesterday, April 22, in Virginia.

Thirty-four years ago in Kentucky, Perfect Poppy foaled a bay colt by Secretariat for owner/breeder Barry K. Schwartz. The gray mare by Poppy Jay was a stakes winner for the owner, then relatively new to the business, having won the G3 Affectionately at Aqueduct in January 1982. “She was a pretty decent mare,” Schwartz recalled, amazed at her son’s advanced age. “She beat Andover Way, which was quite a good filly at the time.”

Shortly after that stakes victory, her tenth win in 28 starts, Perfect Poppy was bred to Secretariat. “You had to love Secretariat, you had to believe in him,” said Schwartz of the choice. As so often happens in the world of breeding, however, the racing prowess of the parents wasn’t passed down to the son.

Named General Poppy, the youngster made his racing debut in a seven-furlong maiden special weight at Belmont Park on October 20, 1985, in the care of trainer William Schmitt. The race was loaded with talent – four future stakes winners were in the 14-horse field, headed by G1 winner Dance Of Life, who finished second to Out East. The latter would go on to win the Chief’s Crown Stakes at Aqueduct in his next start, and Jack Of Clubs and Comic Blush were the others that went on to stakes glory. The race also drew two grandsons of Secretariat, Waseca and Ravel’s Bolero, both out of Secretariat mares.

Poor General Poppy was in way over his head and trailed the field throughout. He lost touch by the time they entered the stretch, and was beaten more than 44 lengths, crossing the wire 15 lengths behind the next-to-last finisher. His effort wasn’t even worth a line in the chart notes. 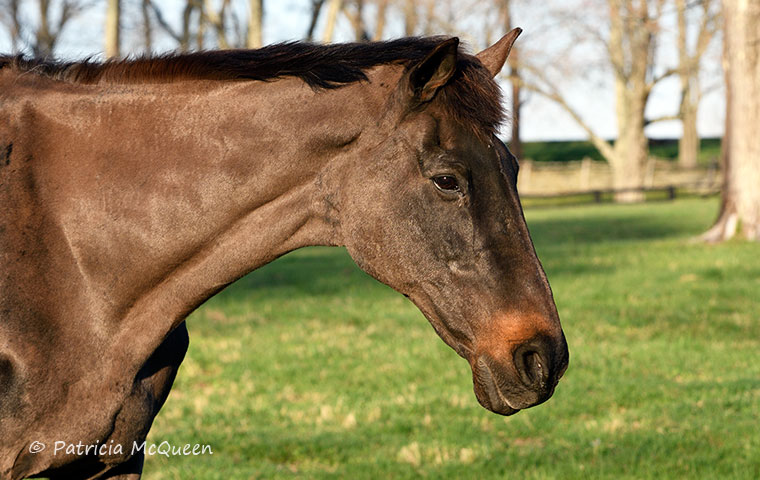 A month later, he was dropped into a $50,000 maiden claiming race at Aqueduct, and again was well beaten. He was then sent to trainer James Hartley at Suffolk Downs, looking for softer company. In a six-furlong maiden special weight on December 13, 1985, General Poppy finished fifth under jockey Stewart Elliott, who rode him in all his starts at the East Boston track.

Next came the two best races of his short career. On December 27, he was second by three lengths to Vinnie The Viper, who became a multiple graded stakes winner. General Poppy came as close to winning as he ever would with a nose loss to Doons Tune in another maiden special weight on January 3, 1986, his first and only start on a sloppy racetrack.

He closed out his racing days with a seventh on January 10 and a third on January 24. The stats weren’t impressive, with seven starts, two seconds and a third, for earnings of $4,425. He was clearly not meant to be a racehorse. His calling was something else entirely.

General Poppy was sold at a horses of racing age sale in April 1986 for $10,000, offered as a racing or stallion prospect. The buyer was listed as Cogsaw Corp. What happened in the next few years is unknown, but he turned up in the barn of the Piedmont Fox Hounds in Upperville, Virginia, in 1991 or 1992. Apparently he had been donated to Morven Park, a major equestrian facility that accepted horses for its riding school and other facilities.

For whatever reason, he didn’t work out there and was sent to Erskine Bedford, a renowned master of the hunt at Piedmont.

Whatever General Poppy did in those intervening years, it obviously didn’t involve much training as a hunter, jumper or cross-country horse, but he had been gelded. Proving too green for Bedford and for Randy Waterman, a Piedmont joint master and huntsman, he was passed to joint master Gail Wofford, who started working with the horse in 1992.

“Maybe too much was expected of him right away,” she said of why she ended up with General Poppy. Horses in the Piedmont barn are regularly traded among the staff as needed, and if one needs training it would go to someone who had the time to invest.

After his first outing with Wofford, she had a decision to make. “The first time I took him cross country, he couldn’t even go up and down a hill or through water, and I don’t think he knew how to jump.” She described him as a nervous wreck in his stall afterwards – rolling around and visibly bleeding. “His whole mind was just fried.” 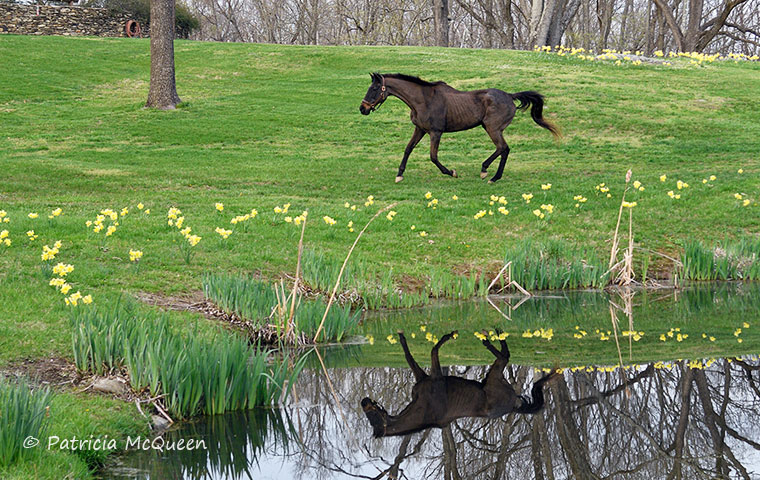 Normally, she would have sent him on to someone else, but the horse had inexplicably won her heart. “He had the most darling lop ears. I never liked a lop-eared horse; they always looked goofy to me. But there’s something about his lop ears that I just loved. And he had the sweetest face. I really liked him.”

Wofford had experience taking difficult horses and turning them into good fox hunters, and she thought Poppy would be worth the effort.

She took it slow, skipping the hunt for a while and just practicing with him in cross country gallops and teaching him how to jump. When she next tried a hunt, he bled again. “He was getting better at hunting, but he’d still come back as kind of a mess.”

Fortunately, Poppy was a very sound horse, so she would take him hunting more often than she would most horses. She recalls giving him Lasix once, and he never bled again. “And the more I would take him hunting, the more sane he would be at the end.” With the extra work, a light bulb seemed to go on in the horse’s head, as if he was saying, ‘So this is what they want – it’s fun after all!’

His transformation was complete after about a year of working with him.

One day stands out in Wofford’s memory, when she had to abort a jump after a rider in front of her stopped. She turned Poppy, intending to circle around and take the fence when the trouble cleared. The horse had other ideas – he thought she was aiming him for a huge gate off the road, at least five feet high. “We had our signals mixed up, and he jumped this enormous fence. We landed and I started laughing.” Suddenly, she knew what she had. 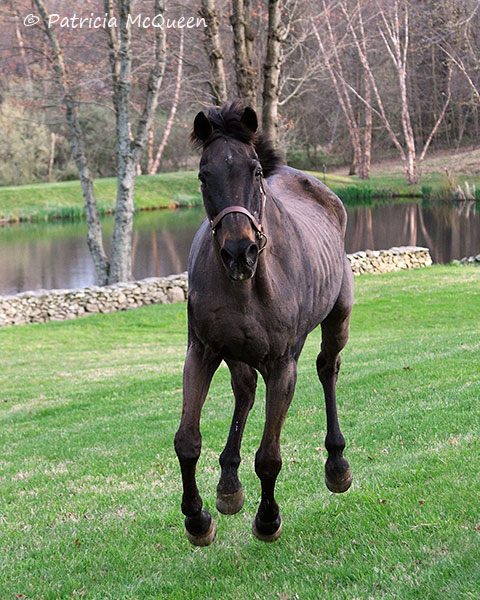 Wofford and Poppy were together for several years. “I would have him on a loose rein because I knew him so well. We were like hand and glove. He became a tremendous fox hunter, watching the hounds. He was exceptionally sound, exceptionally well balanced and exceptionally smart. He was just lovely – absolutely the best fox hunter I’ve ever had, and I’ve had some good ones!”

When Wofford resigned as joint master in 1997, she had to send Poppy back to Waterman’s care at the Piedmont barn. “I wanted to keep him, but since Randy had given him to me, it was only fair that I gave him back.”

He didn’t stay with Piedmont long, because that’s when Lee McGettigan entered the picture. The upstate New York native had moved to Virginia about two decades earlier, drawn to the fox hunting culture – she’s been a member of three hunt clubs over the years. “Fox hunting is such a thrill when it all works together with the huntsman and the pack of hounds running correctly, and you see such incredible countryside,” she explained of her passion.

Waterman probably didn’t think Poppy would be good as a huntsman’s horse with the hounds all around him, and since McGettigan needed a horse, she bought him.

She marveled at his conformation, power and motion – with his shoulders and knees up at jumps, and a tremendous hind end with low hocks. “You can see the way he’s built even through his old bones now. He covered so much ground and could jump over anything.”

About 15 years ago, she rode him on his last hunt. Wofford had told Piedmont that she would take him when he retired, but then she learned McGettigan had bought him. “I was in love with Poppy,” said Wofford, “but I cannot say enough about Lee. When I saw him with her, I was so happy. His longevity is probably due to her.”

Not that it has always been easy. The gelding has Cushing’s disease, which is caused by a disorder of the pituitary gland, so he needs to be closely monitored. The most visible symptom is abnormal hair growth and lack of shedding; McGettigan has him clipped several times a year. She also has to work hard to keep weight on him and he’s losing muscle tone, although it’s hard to say how much of that is from age versus the disease itself.

Oblivious to Cushing’s impacts, Poppy enjoys his retirement in a large tree-studded pasture. His companion from April through July is his best friend Pigeon, McGettigan’s current fox hunter.

“He’s crazy about her,” she said, adding that she bred the mare from a wonderful New Zealand warmblood hunter named Dark Ale. During hunt season the rest of the year, Pigeon is busy at her job, so another suitable companion is found.

Pigeon allows Poppy to boss her around so he can exert a little of the alpha male in him – he was always an opinionated horse with a big ego, noted McGettigan. Many horses will push around an old horse, so she makes sure that doesn’t happen with Poppy by pairing him up with the right horse when Pigeon isn’t available.

Poppy shows the spark of that dominance in another way as well. He enjoys having his face scratched and will come up and shove you to get what he wants. “He’ll pick me right up off the ground” to scratch that itch.

Despite his age, he still has some good teeth, evidenced by his love of carrots and apples (although the latter get squished first with a carefully placed stomp or two by McGettigan.) He still eats grain and sweet feed, supplemented with good hay, preferably second-cutting hay because the first cutting is “always too coarse”. She goes to great lengths to try to keep his weight up with quality food and hay.

Wofford, who still visits Poppy regularly, laughs when she thinks back about the “fight” she had with McGettigan about who would spend money to take care of an old horse. “He had two women here who appreciate who he is. We know that he’s a great horse.”

And they both understand that, at his age, every day is a blessing.

He’s doing well, showing enthusiasm and zest for life during my visit in early April, while also enjoying periods of dozing in the warm spring sunshine. “He’s a grand guy, and he’s not feeble, but every time I go out there, I am happy to see he has another day,” said McGettigan.