Over the last eight weeks, we have been showcasing the work of renowned equine artist Greg Montgomery, in particular the iconic posters he has produced every year since 1986 to commemorate Saratoga’s Travers Stakes. The series ends today with a look at last year's renewal and this year's poster that commemorates the race. Now we want you to vote for your favorite of the nine posters we have featured during the series. Click here to see all the posters and for details of how to vote. The result will be announced on Friday, the day before this year's Travers.

Our journey through some of the best performances in America’s oldest stakes race has brought us back to the present. We have travelled as far back as 1930 and the huge upset caused by Jim Dandy, through the brilliance of Affirmed, Holy Bull and Point Given.

Now we find ourselves looking at last year's race. You do not need me to tell you about Arrogate or what has happened since his record-breaking performance. Instead I will look at the race itself, the build-up and its immediate aftermath.

Firstly, it is worth remembering that, a year on from American Pharoah’s Triple Crown, the 3-year-old crop of 2016 was looking distinctly average. The Kentucky Derby winner Nyquist was upset in the slop at Pimlico by Exaggerator and never looked the same horse afterwards. Exaggerator then finished down the field in the Belmont when a short price, leaving Creator to win at 17-1. This all painted a murky picture over who was the best of the classic generation and indicated it was perhaps a lower than average bunch.

Secondly, it is often forgotten how much of a risk it was for Bob Baffert to bring Arrogate to Saratoga. It was only a year previous that American Phaoroh had suffered a shock defeat in the race. And this was a horse who had never run in a stakes race and had laboured to win a three-runner allowance at Del Mar just weeks earlier.

In the run up to the Travers, it was accepted wisdom that Arrogate was the second string of the Baffert barn. His stable jockey was on American Anthem, having presumably been given the choice, and Mike Smith was called up as a replacement.

His trainer has since been quoted on a number of occasions as having stated Arrogate was the best 3-year-old in the country ahead of the Travers. Given his experience, this is probably true, but he was certainly keeping it close to his chest - the horse went off at 11-1.

Arrogate won the race in record time by 13½ lengths, beating all the leading protagonists for the 3-year-old crown bar Nyquist. However, immediately after the race, some believed that this had only muddied the picture further and labelled it a 'freak' performance that would not be repeated.

We know differently now, of course, and Arrogate more than proved that in the Breeders’ Cup Classic, the Pegasus and the Dubai World Cup. 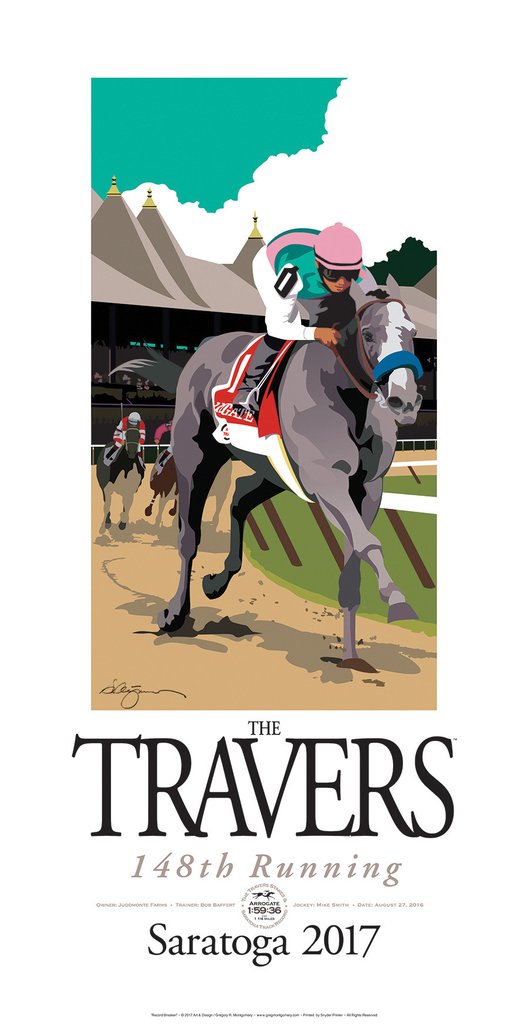 Looking back now, it seems that it was, in fact, an above average crop of 3-year-olds, who raced valiantly in beating each other until the true champion was allowed to show his ability for the first time.

A welcome reminder that, while Saratoga may be known as 'The Graveyard of Champions', it can also give birth to them as well.

Click here to vote for your favorite Travers poster

Here Montgomery talks about the 2017 poster ‘Record Breaker!’ (right) commemorating the 2016 running of the Travers.

The incomparable Thoroughbred Arrogate and jockey Mike Smith won not only the 2016 Travers Stakes — breaking the track record and Travers Stakes record in the process — they also went on the win the Breeders' Cup and the Pegasus World Cup! Talk about starting out on top!

We just had to show Arrogate bursting from the poster frame in front of Saratoga's famous grandstand, thirteen-and-a-half lengths ahead of his rivals. This poster has a special added feature — the record-setting time, distance, and the racing team are all named on the front of the poster for historical accuracy.