Continuing our series looking back at Travers Stakes posters produced by equine artist Greg Montgomery, today we find ourselves in 1994 and look at the 1995 poster that commemorates that years race.

The 1994 Travers saw a small but select field of five runners take their chance for the Midsummer Derby. However, it promised to be an intriguing affair nontheless and, in the end, it turned out to be a classic.

The leading 3-year-old that year was the striking grey Holy Bull. Unbeaten at two, he won both the Florida Derby at Gulfstream Park and the Blue Grass Stakes at Keeneland on his way to the Kentucky Derby. Sent off a well supported favourite, everything went wrong for him that day. The heavens had opened, leading to a sloppy track, he uncharacteristically missed the break, and he got a series of bumps. He finished a well-beaten 12th.

Holy Bull then dropped in trip and won three on the bounce, including the Met Mile, the Dwyer Stakes and the Haskell, all in impressive fashion. However, going into the Travers, he was due to step up in trip to a mile and a quarter for the first time since the Derby.

Looking to exploit this was legendary trainer D. Wayne Lukas, who believed his horse Tabasco Cat, who had closed to win both the Preakness and Belmont, would be able to outstay the favourite. To ensure a testing pace he entered Commanche Trail to play hare and hassle Holy Bull for the lead.

The plan seemed to get off to a good start as Holy Bull matched Commanche Trail’s hard early fractions. They hit the six pole in 1:10 2/5 and the mile in 1:35 4/5. Only Honest Pleasure (1976) and the great Man O’War (1920) had managed to win the Travers after setting such fast fractions.

However, at this point that the plan started to go wrong for the second favourite. Tabasco Cat was flailing and only Preakness and Haskell third Concern (who was as far as 20 lengths back at one stage) was making any progress into Holy Bull’s four-length lead.

Would those fast early fractions take their toll? Would 'The Bull' be able to hold on?

To really appreciate what happens next, I recommend you watch the replay below and listen to the call given by Tom Durkin.

He did hold on, just, in what would go down as one of the greatest Travers performances of all time.

Concern would go on to have his day in the sun by winning the Breeders’ Cup Classic just two months later. But Holy Bull himself would only race (and win) twice more before being pulled up and retired in the 1995 Donn Handicap.

At stud, Holy Bull produced champion 2-year-old Macho Uno and Kentucky Derby winner Giacomo. Macho Uno himself is a successful sire and has produced Breeders’ Cup Classic winner Mucho Macho Man. Both are still at stud and continue his legacy, as can the unbeaten European G1 winner Caravaggio whose dam was sired by Holy Bull. 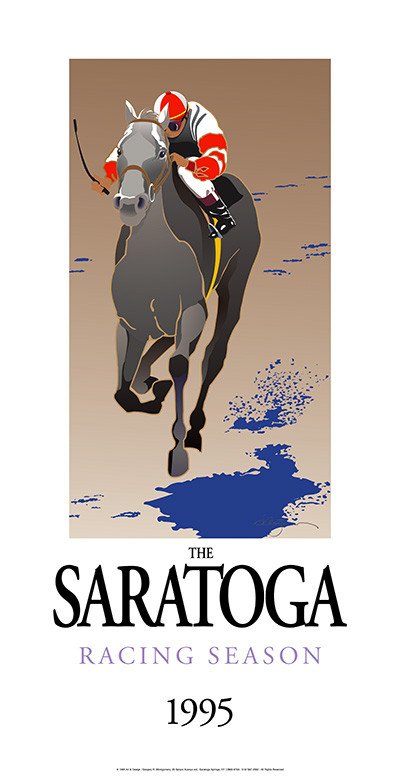 As for the great horse himself, he passed away only last month at Darley’s Jonabell Farm in Kentucky. He was 26 and a champion through and through.

Here Montgomery talks about the 1995 poster "Out In Front" (right) commemorating that race.

I don’t know why, but I love grey horses. From the first moment I saw Holy Bull, I knew I had to do an image of that beautiful, powerful — and, as it turns out — victorious animal. This poster is done in an early 1900s poster style. It has a contrasting outline around the figures and a distinctly Oriental 'blockprint' look.