Continuing our series looking back at Travers Stakes posters produced by equine artist Greg Montgomery, here we look at the 1962 renewal and the special one-off 2008 poster that commemorates that race.

At this point in this series we focus on three classic races from history that have helped shape the legend of the Travers Stakes, and indeed of Saratoga itself. The three stories and the images Greg Montgomery created for them form the basis of a special commemorative poster released in 2008. This is the second of those stories.

The 1962 Travers is the second of those races. And what better way to tell the story than to take extracts from the superb in-depth article written by Mary Pitt on TRC in August last year. You can read the full article here.

The race. The most elemental form of competition. Two individuals matching strides, each straining with every sinew to reach the finish line first. Grundy and Bustino battled it out for the last quarter mile of the 1975 King George VI and Queen Elizabeth Diamond Stakes at Ascot. Affirmed and Alydar eyeballed each other through the final mile of the mile and a half Belmont Stakes in 1978.

But it rarely works out that way. More often than not, when two horses engage in an early speed duel, one or both will fade in the stretch.

Placed in the Derby and the Preakness

Let’s meet the cast of characters. Breaking from the rail was Ridan. A son of Nantallah out of Rough Shod II, he was a full brother to 1965 champion 2-year-old filly Moccasin.

Ridan went unbeaten in seven races as a 2-year-old, winning his three-furlong debut at Hialeah in February. Following wins at Keeneland in April and the defunct Washington Park in June, he took a trio of stakes at Arlington. After capturing the Washington Park Futurity in early September he developed splint trouble and was off the rest of the year.

Ridan made an early start to his 3-year-old campaign, winning Hialeah’s Hibiscus in January, then losing for the first time in the Bahamas to Sir Gaylord, a half-brother to Secretariat. He was third to Sir Gaylord in the Everglades, but was disqualified and placed fourth. He ran third in the Flamingo but, in a year of close finishes and disqualifications, was moved up to second after winner Sunrise County’s number was taken down.

He came back to win the Florida Derby, then defeated soon-to-be Kentucky Derby winner Decidedly in the Blue Grass.

Highly touted Sir Gaylord (who went on to sire Sir Ivor) was retired through injury on the eve of the Derby, in which Ridan finished third as the favorite.

Ridan was a nose behind winner Greek Money in the Preakness. Ridan’s jockey, Manuel Ycaza, claimed foul against John Rotz on Greek Money, but the stewards ruled Ycaza himself had caused interference, fined him $200 and handed him a ten-day suspension.

Ridan annexed the Arlington Classic in a romp in the mud in July, then was second in the American Derby on August 4 before entering the gate for the Travers.

Jolley called Ridan “a beautiful horse – and almost impossible to do anything with. He was very difficult to gallop. He wanted to do it all, all the time”.

Jaipur, in post position two, was by Nasrullah and out of the grand producer Rare Perfume. Owned by George D. Widener, chairman of The Jockey Club, the almost black colt with a small star didn’t make his career debut until July of 1961, winning by six lengths, then taking the Flash Stakes in the slop at Saratoga, running second in the Saratoga Special, and again scoring in the slop in the Hopeful.

After a narrow defeat in the Belmont Futurity, he took the Cowdin, then closed out his campaign as runner-up in the Champagne.

At three, he won the Gotham and Withers, skipped the Kentucky Derby, then finished tenth of 11 in the Preakness. He won the Jersey Derby at Garden State on the disqualification of Crimson Satan before taking the Belmont by a nose over Admiral’s Voyage. He was Widener’s first Belmont winner, after seven previous attempts.

Sour after winning the Belmont

Jaipur went sour after his Belmont win, running off during a workout and refusing to train. Winbert F. ‘Bert’ Mulholland, who had been Widener’s trainer since 1933, wisely sent him for a break at his owner’s Erdenheim Farm near Philadelphia. After a seven-week respite, Jaipur came back to win the August 1 Choice Stakes at Monmouth. Bill Shoemaker, who was astride for the Belmont, would again pilot Jaipur in the Travers.

Coupled as an entry in the gold and purple colors of Harry and Jane Lunger’s Christiana Stable, the same as those worn by the ill-fated champion Go For Wand, were Cyane and Smart.

Cyane, a son of Turn-To, won the Belmont Futurity over Jaipur, was second to him in the Choice Stakes, and won the Dwyer. He went on to become the sire of Obeah, dam of Go For Wand.

Smart, by Thinking Cap, won several stakes in a long career, including the Manhattan Handicap (in a track record), the Gallant Fox Handicap, and the Massachusetts Handicap twice, at five and six. P. J. Bailey rode.

Cicada raced for Christopher T. Chenery, whose blue and white Meadow Stable colors would be made famous by Riva Ridge and Secretariat a decade later. Cicada was a top performer in her own right, winning 11 of 16 races at two, including the Schuylerville, Spinaway, Matron, Astarita, Frizette and Gardenia, the last named by 10 lengths.

She had already beaten her elders in two of her first three starts at three, finished second by a nose to Ridan in the Florida Derby, the winner surviving a stewards inquiry after bumping in the stretch, and captured the Kentucky Oaks, Acorn and Mother Goose before taking her place alongside the boys in the Travers with Bobby Ussery aboard.

The gray Military Plume was owned by Mrs. Walter M. Jeffords. The son of Princequillo won three of 13 starts at three. John Sellers was in the irons.

Completing the field was longshot Flying Johnnie, who had three wins each at two and three and finished second to Cyane in the Dwyer and ninth, just ahead of Jaipur, in the Preakness.

Under the allowance conditions, Jaipur and Ridan both carried 126 pounds; Cyane carried 120; Flying Johnnie, Military Plume and Smart were at 114, and the lone filly Cicada had 118. Jaipur went to post the favorite over Ridan.

‘Head to head for the lead’

The Daily Racing Form chart records the off time as 4:48 p.m. Cicada broke sharply to her left, impeding Military Plume and, to a lesser extent, Cyane, but Jaipur and Ridan, who broke side by side on the rail, were already a length clear of the rest, with Cyane and Eldon Nelson on the outside in third, and Flying Johnnie and Charlie Burr along the rail in fourth.

Going under the wire the first time, Ridan on the inside held a slender advantage over his adversary. Announcer Fred Capossela, in his no-nonsense, machine gun delivery, described the two going “head and head for the lead” entering the clubhouse turn, with Cyane four lengths back in third.

Well clear of the rest, they raced down the backstretch as a single entity. For the record, Cyane remained in third, with Cicada fourth, Smart fifth, Flying Johnnie sixth and Military Plume last after that initial bump.

Heading into the far turn, Ridan held a slight lead over Jaipur. The rest were bunched, with Military Plume trailing a distant last. Moving around the turn, Cyane edged slightly closer to the locked leaders, with Military Plume poised to make a move from five wide on the outside.

In mid-stretch, Cyane fell away tamely, but the leaders showed no sign of their battle letting up. Ycaza went to the stick first, giving Ridan two sharp right-handed cracks at the furlong pole, with Shoemaker answering with three of his own to Jaipur’s right flank. They lunged in lockstep to the wire.

‘The Shoe’ confident after photo finish

Dave Alexander, writing in The Blood-Horse, recalled press box denizens betting on the outcome of the photo. It eventually showed Jaipur’s blinkered head in front by a nose. Military Plume made up a tremendous amount of ground to finish third, only a length behind the duelling duo. Smart was fourth, followed by Cyane, Flying Johnnie and Cicada.

Ycaza hadn’t been sure who won, while Shoemaker thought for sure he’d got it. Jolley said afterwards: “I knew Jaipur beat us. I saw ‘The Shoe’ drop his head down right at the finish.”

For only the second time, the canoe in the infield lake would be painted in the winning owner’s colors. As traditions go, this is a relatively new one, begun with the 1961 running. George Widener’s light and dark blue would adorn the infield lake for the next 12 months.

The only one of them to make the Hall of Fame

Charles Hatton, in the days long before YouTube, wrote in the American Racing Manual: “Color films of the race were made and presented to the National Museum of Racing, for the vicarious thrills it will afford future generations of turf goers.”

Neither combatant won another race that year. Jaipur was named champion 3-year-old male. 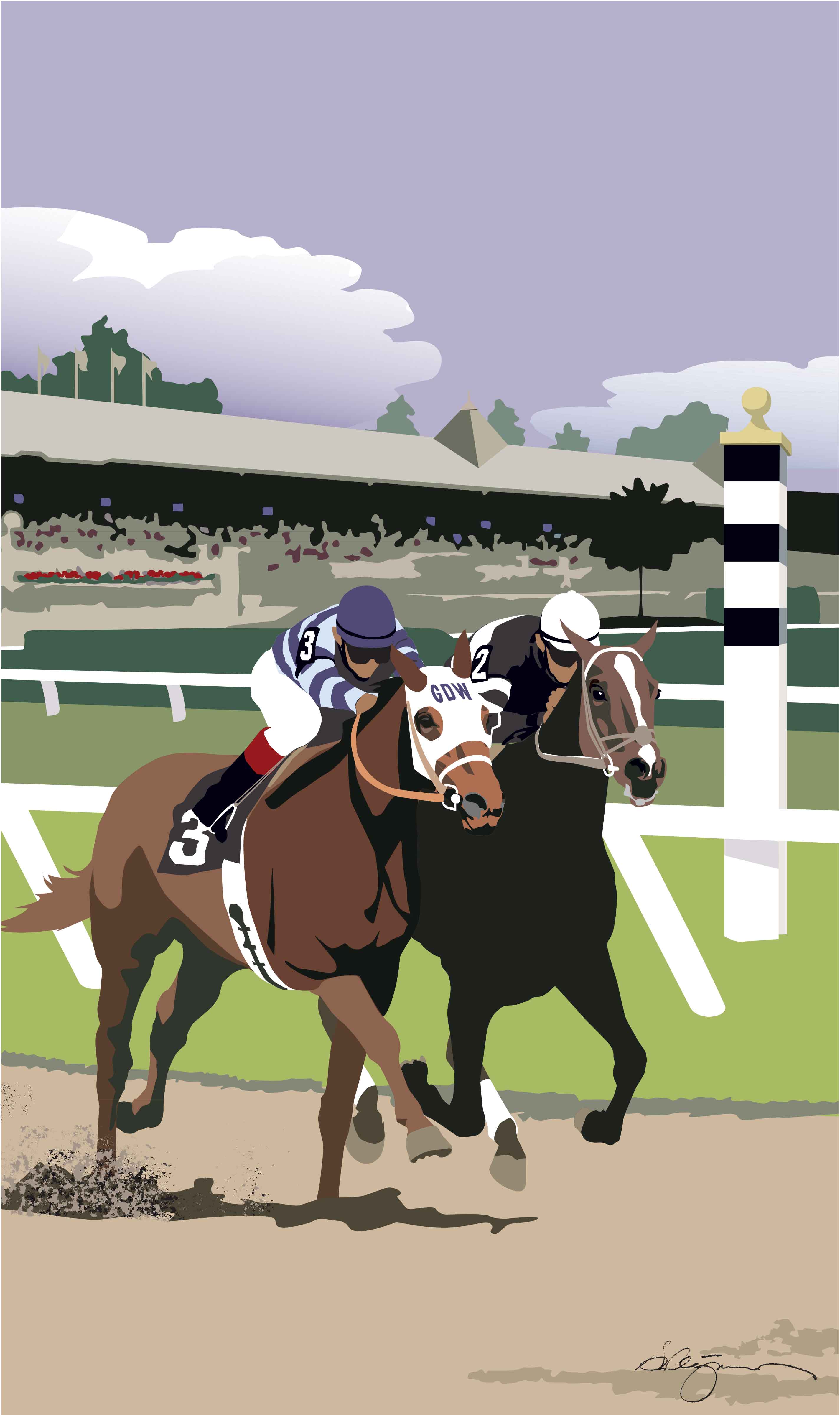 Both came back for what turned out to be abbreviated campaigns at four. Ridan won his first two races, but Jaipur never won again.

Their final race was the Seminole Handicap against Kelso at Hialeah in February. Ridan was the favorite under 129 pounds to Kelso’s 128. Kelso won, with Ridan second and Jaipur fourth.

The only member of the field enshrined in the Hall of Fame is last-place finisher Cicada, who went on to further her stellar career, earning divisional championships in each of the three years she raced.