Over the next eight weeks we will be showcasing the work of renowned equine artist Greg Montgomery. In particular we will be looking back at some of the iconic posters he has produced every year since 1986 to commemorate Saratoga’s Travers Stakes. At the end of this period we will ask you to vote for the poster you believe is the best.

This year’s Saratoga meet begins on Friday, July 21, with 149th running of the historic Travers Stakes on Saturday, August 26. Over the years the race known as the ‘Mid-Summer Derby’ has been contested by some of America’s greatest equine stars.

Every year since 1986, Montgomery has celebrated the race by producing one-off pieces of artwork telling the story of the previous running. *To avoid confusion please remember when reading the articles that the date of the poster is always one year ahead of the race it commemorates.*

Over the next eight weeks we will be showcasing some of these great pieces and the races that inspired them. 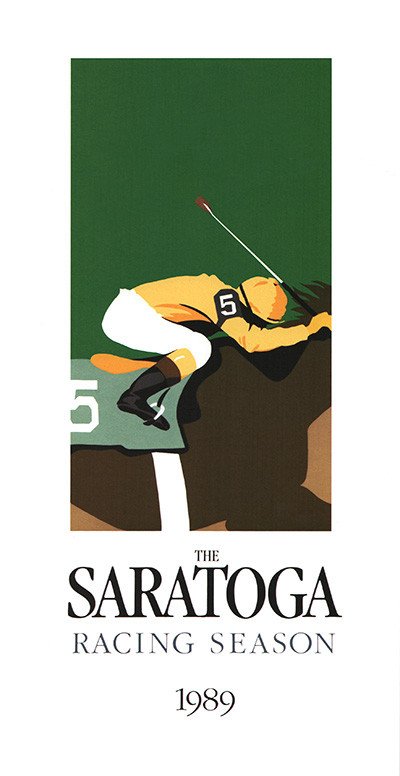 The 1988 Travers produced a scintillating finish between the previous year's champion 2-year-old and Kentucky Derby second Forty Niner, Peter Pan Stakes winner Seeking The Gold and morning-line favourite Brian’s Time, who had previously been placed in both the Preakness and the Belmont.

Forty Niner had a two-length lead turning for home. Despite a sustained challenge from both his main rivals, he managed to hang on.

An interesting side note is that all three of those gladiators that day would go on to be influential sires. Brian’s Time was sold to stand in Japan on retirement and produced two Japanese Horses of the Year. He regularly topped the Japanese breeding charts.

Despite being the least successful of the three on the track, it was Seeking The Gold who would go on to be arguably the most succesful at stud. Among numerous stakes winners he produced from all over the world was Dubai Millennium. A winner of four G1s, including the Dubai World Cup, he in turn sired Dubawi, currently the world number two in the TRC Global Sire Rankings.

Here Montgomery talks about the 1989 poster "The Win" (above) commemorating that race.

Woody Stephens was one of the greatest Thoroughbred horse trainers in the world. His horses won the Kentucky Derby and practically every major stakes race in the United States. But he had never won the Travers. Not until August 1988, when Forty Niner took Stephens and rider Chris McCarron into the record book.

In August 1989, at the suggestion of a friend, I went to see Stephens in his box in the clubhouse at Saratoga Race Course. I wanted to show him the poster I had just done and maybe ask him to autograph one for me. More than anything, I really just wanted to meet him — he was legendary.

Well, I walked up and introduced myself and showed Mr. Stephens the poster I’d done. He seemed surprised and genuinely pleased. I gave him some copies of the poster and, pressing my luck, asked for and got his autograph. I was like a kid out of school.

The key to this image is the balance between its top and bottom. The solid green top is almost a mirror image of the mostly brown bottom. The jockey's crop, torso and legs form a Z shape, which knits the two fields together.

To see how delicate the balance is, just cover the jockey's crop. Without it, the eye does not move across the image and the green becomes overpowering. As it is, the green is strong enough to balance the typography below.