Continuing our series looking back at Travers Stakes posters produced by equine artist Greg Montgomery, here we look at the 1930 renewal and the special one-off 2008 poster that commemorates that race.

At this point in this series we focus on three classic races from history that have helped shape the legend of the Travers Stakes, and indeed of Saratoga itself. The three stories and the images Greg Montgomery created for them form the basis of a special commemorative poster released in 2008. This is the first of those stories.

Saratoga in August of 1930 was a buzz with anticipation. High society from all over the country was flocking to the small city in the foothills of the Adirondack Mountains. The reason? They all wanted to be in town for the 61st running of the Travers Stakes and a chance to see two great champions meet.

The odds-on favourite was Gallant Fox, who had recently become just the second ever winner of the Triple Crown. In fact, he was one of the first horses for whom the press started to use the term 'Triple Crown'.

The short-priced second best on the chalk was Whichone, owned by legendary owner-breeder Harry Payne Whitney. Whichone had beaten Gallant Fox in the Belmont Futurity as a 2-year-old to gain the juvenile championship. He was then sidelined with an injury during the spring and missed the Triple Crown. He returned in the summer and had won three races in two weeks leading up to the Travers. Because of this, many in Saratoga believed Whichone to be the superior horse.

The prospect of this historic match drew high society from all over the state. Even future President Franklin D. Rooselevlt, who was at the time Governor of the State of New York, made the trip.

Only two horses took their chance to oppose the two heavyweights. Sun Falcon, who was priced at 40-1, and Jim Dandy, priced up at 100-1. Jim Dandy had only ever won two races despite running numerous times and those were not top-class races. Crucially however, his only stakes win had come a year previously at Saratoga on a heavy track.

On the weekend of the Travers it rained all through Friday and then again on Saturday morning. The track was described as heavy and, in a 2001 New York Times article, Richard Cherry, who was there on the day, said it “sucked the boots off your feet”.

Both Gallant Fox and Whichone were speed horses and, when they broke, both went forward. It had been decided that the crown of the track was much faster and both jockeys decided to stay wide. Approaching the mile marker, it looked as if the duel was on as Gallant Fox edged ahead and Whichone tried to run at him. However, shortly after, the crowd could sense they were both struggling.

Then, on the inside, came Jim Dandy. 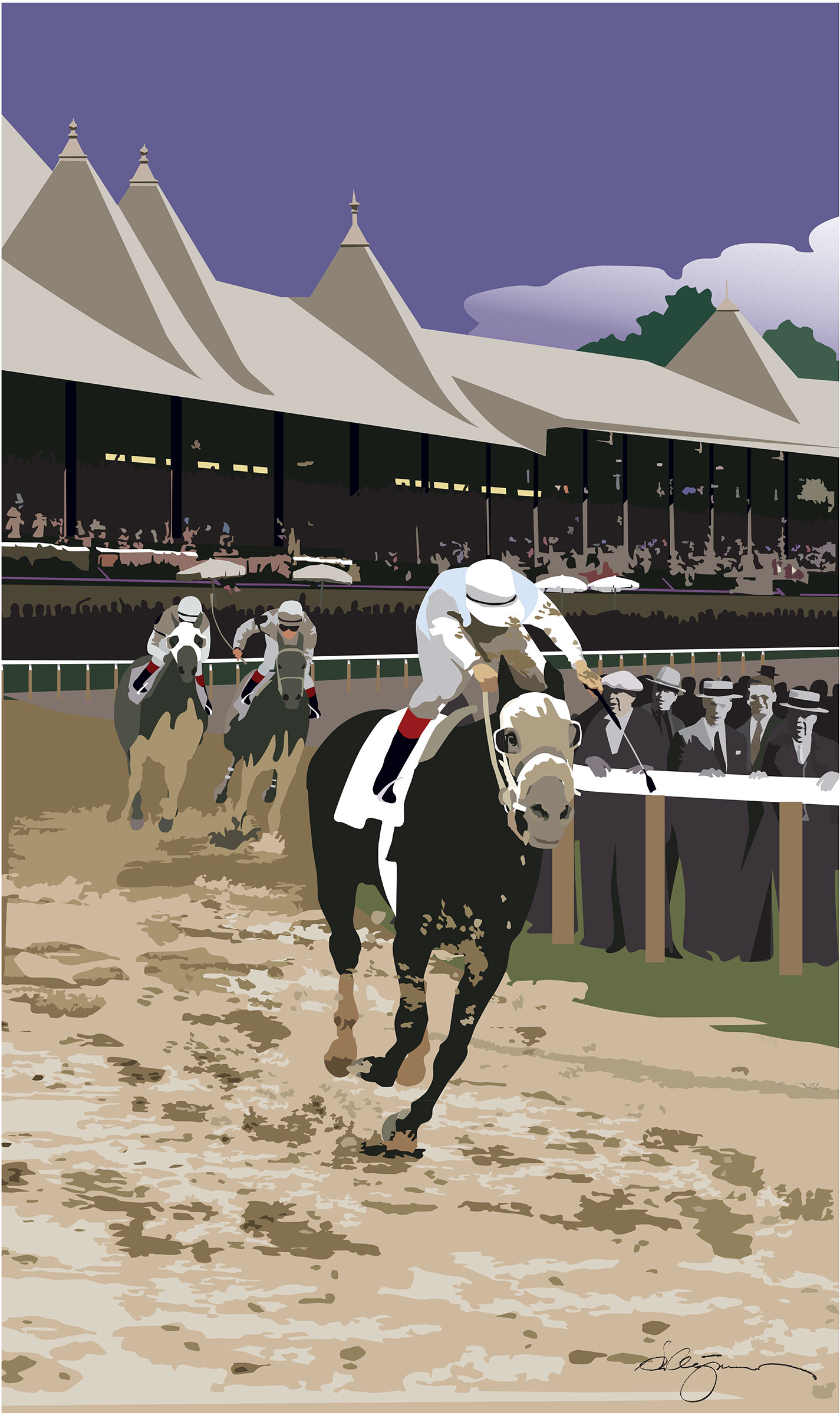 He took the lead at the three-eighths pole and, while Gallant Fox tried to stay with him, he eventually surged to the lead and won by eight lengths. Gallant Fox finished a tired second, while Whichone was pulled up to a walk in third.

The then-record crowd of nearly 30,000 was stunned, many not believing their eyes until Jim Dandy’s jockey wiped the mud from his silks. It was one of the biggest shocks in the history of American racing.

Jim Dandy would never win another stakes race despite continuing to run until the age of 12. Despite his overall average ability, the shock of that race was enough for Saratoga to immortalise him in 1964 with a race named in his honour.

Today even the most casual racing fan knows the name Jim Dandy, while only real aficionados of racing history know the names of the great Gallant Fox and Whichone, showing that greatness is sometimes achieved not through a large body of work, but in just one memorable moment.