Continuing our series looking back at Travers Stakes posters produced by equine artist Greg Montgomery, here we look at the 2001 renewal and the 2002 poster that commemorates that race.

The 2001 season was all about one horse, the Bob Baffert-trained Point Given. As a 2-year-old he had been second by a nose in the Breeders’ Cup Juvenile and followed up with a win in the G1 Hollywood Futurity Stakes. However, given that he was absolutely huge (approaching 17 hands), it was fully expected that he would improve with age.

And improve he did. His first two starts at three were impressive, including a 5½-length romp in the Santa Anita Derby. That made him a short-priced favorite for the Kentucky Derby. Unfortunately, when the gates opened at Churchill Downs he was just not the same horse. He finished 11 lengths back in fifth.

In his next start, he proved that the Derby was just a blip by winning the Preakness. Then he went to the Belmont and produced a truly remarkable performance to win by 12½ lengths in the third quickest time in the race's history. He then put in a gritty performance to win the Haskell, giving weight to his rivals.

Going into the Travers, he was now aiming to become the first horse ever to win four $1 million races in a row. He stalked the pace on the outside, coasted to the lead on the home turn and went away by 3½ lengths looking as though he had only just begun. That day the horse known as 'The Big Red Train' and 'T-Rex' drew a record Travers Day crowd of 60,486, and they revelled in his imperious display. What they didn’t know was that it would be the last time anyone would see the great horse race.

A few weeks later it was announced that he had sustained an injury and would be retired to stud.

For his trainer and jockey, it had been a bittersweet journey. Both had been quoted as saying he was the best horse they had trained or ridden, and while they were vindicated in that belief, both felt frustrated by his inexplicably poor performance in the Kentucky Derby, which cost him the Triple Crown. 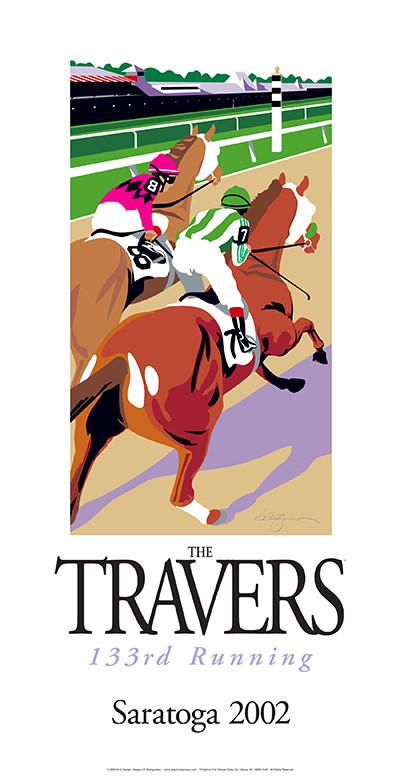 His owner, Prince Ahmed bin Salman, of Saudi Arabia, would not have to wait long to collect the full set, however. Three weeks before the 2002 Derby, he spent a reported $1 million buying a majority stake in Illinois Derby winner War Emblem. Transferred to Baffert and ridden by Victor Espinoza, who had never seen the horse before the morning of the race, he sprung an upset to win the Run for the Roses.

Tragically, the Prince suffered a heart attack and passed away only a few months later, aged 43.

So much of what is shown and remembered of famous Thoroughbred races happens in the homestretch or, more typically, at the finish line. And for good reason. It is at the finish that all the carefully wrought strategies and deft positioning play out in a thundering crescendo, to the delight of thousands.

This year, I wanted to show a little bit of how the winner got to the front of the pack — a bit of the drama played out far from the grandstand and more than a half-mile from the eventual finish. I wanted to show the incredible sinuous power of the race-ready Thoroughbred making his move in the backstretch. From this vantage point, the full panorama of Saratoga’s famous grandstand and infield is laid out before you. Too bad you can’t be both places at once.