Continuing our series looking back at Travers Stakes posters produced by equine artist Greg Montgomery, here we look at the 2004 renewal and the 2005 poster commemorating that race.

There are lots of different things that can contribute to the drama of a truly great race. Sometimes it is a true champion producing a flawless performance, sometimes it is a huge upset. Occasionally, events happening off the track while the race is actually going on can book the contest its place in history. In 2004, there were examples of all three.

The best 3-year-old that year was undoubtedly the John Servis-trained Smarty Jones. Unbeaten at two, he won the Kentucky Derby comfortably as a well-supported favourite. He then went to Pimlico and his supporters witnessed a classic example of the first type of great race. That day he was sublime, storming to an 11½-length victory in the Preakness Stakes over a field made up of multiple future Grade 1 winners. That performance made Smarty Jones one of the first stars of the modern era.

It was the third time in three years that a horse had won the first two legs of the Triple Crown. But, while Funny Cide (2003) and War Emblem (2004) had both bombed in the Belmont, the display at Pimlico indicated the 27-year wait for a Triple Crown hero could be over.

Although they didn’t yet know it, when the big day came at Belmont on June 5, the then record crowd of 120,139 was about to witness one of the most dramatic versions of the second type of great race.

Racing keenly, Smarty Jones took up the running down the back to a deafening roar. By the home turn he had shaken off his nearest pursuers. But then, out of the pack, surged the diminutive Birdstone. Smarty Jones rallied gamely, but his early exuberance caught up with him and the crowd fell silent as Birdsong passed the post a length in front.

Could a race be any more dramatic? Well, the Travers tried its best.

The first twist came when Smarty Jones was retired after his Belmont defeat. This left Birdstone to compete against Derby second and Haskell winner Lion Heart and Jim Dandy winner Purge and runner-up The Cliff's Edge.

What really set up the drama, though, was the weather. In the build-up, the storm clouds gathered, so much so that, by the time the gates opened, the track was in near darkness.

The only illumination were the flashes of cameras and lightning. Birdstone took the honors with relative ease in the end, staying on strongly from stablemate The Cliff’s Edge.

However, no sooner had he crossed the line than the heavens opened. A deluge began and the track was waterlogged within minutes. Underneath this apocalyptic spectacle was Birdstone’s owner, Saratoga dame Marylou Whitney, who, with no regard for her designer outfit, stormed onto the track, ankle deep in mud, to greet her hero.

Birdstone had proved that his Belmont win was no fluke. And, while racegoers that day were unlikely to believe that they had seen the seasons best 3-year-old, they had certainly witnessed a race as full of drama as those who had seen Smarty Jones in the Triple Crown.

One of the greatest Thoroughbred races of 2004 almost was run underwater. During last year’s Travers Stakes in Saratoga Springs an enormous summer thunderstorm struck. Growing darker and more massive by the minute, the storm clouds turned day into night. Only the low-angle yellow lamps at the finish line illuminated the eerily darkened track.

It had begun to rain earlier, but as jockey Edgar Prado rode the Belmont Stakes winner, Birdstone, across the finish line, the skies opened up. To say that it poured rain does not begin to describe the deluge and winds that followed. You couldn’t see ten feet. It was not a race that anyone who darted through the rain will soon for 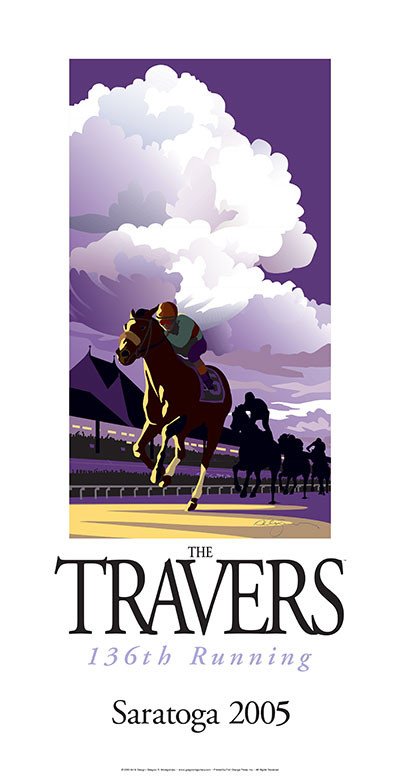 get. And so, my 20th anniversary poster: Storm Bird.

A word of thanks — and admiration — for my long-time friend and colleague, Skip Dickstein. Skip is the photographer who took the unforgettable image of the 2004 Travers finish on which this year’s poster art is based. In the nearly 20 years I have worked with Skip, I have never seen anyone be so consistently in the right place at the right time and come back with the defining image as Skip Dickstein. He’d probably say it was luck or habit, but the horse racing world and I know better. Thanks Skipper, great image.