In the final part of their series on the development of Saratoga, Paul Roberts and Isabelle Taylor look at the implementation of a new master plan for the race course. The extracts are taken from their book The Spa: Saratoga’s Legendary Race Course.

The 2010s promised the beginning of a fresh chapter in Saratoga Race Course’s physical history. After years of instability, the New York Racing Association (NYRA) had a new 25-year franchise to operate the track and capital to invest in its fabric, and, in spring 2011, it embarked on a new master plan process to guide the development of the entire property.

A team of local, national and international consultants developed a series of conceptual ideas for the long-term development of the frontside and backstretch.

These included simplifying the clubhouse-grandstand by removing intrusive services and additions, thereby reinstating its architectural integrity; providing more viewing options for patrons; rearranging the paddock walking ring and saddling provisions to achieve a closer approximation to the intimate viewing experience prior to the 1986 changes; and addressing the backstretch to improve living and working conditions for horses and horsemen.

Specific proposals included the construction of dormitories for track hands, a new jockey house next to the paddock to streamline the race-day operations, and rehabilitating the 1902 saddling shed.

Objectives of the master plan

Although the individual projects were varied in scope, size and siting, the master plan was governed by a series of objectives: enhance the quality of racing; upgrade the equine and customer experience; strengthen the Saratoga brand, particularly through the preservation and celebration of its architectural and landscape heritage; widen its appeal to non-traditional racing audiences; address technological changes; and tackle deferred maintenance.

Nothing so ambitious and far-reaching had been planned for the Race Course since the days of William C. Whitney.

Meanwhile, though, all was not well within NYRA. In late 2011, it was uncovered that the association had been overcharging bettors on exotic wagers. For 15 months to December 2011, it collected nearly $7.4 million in higher takeout fees than was legally permitted.

The affair erupted into a crisis. NYRA had for decades had a troubled relationship with state officials, and the incident prompted the state to take over the operations of NYRA. Thus, in May 2012, New York horse racing became, for the first time in its history, state-controlled.

Governor Andrew Cuomo stipulated the formation of a new NYRA board. Although the measure was intended to last for only three years, it was not until 2017 that the Governor and legislative leaders agreed on a deal to return NYRA to private control.

The takeout scandal and its aftermath, sent shockwaves through NYRA’s operations. Inevitably, the capital improvement plans were disrupted. This does not, however, mean that the track has not seen investment; indeed, beginning in 2013, new construction, remodeling, maintenance and tree planting have taken place across the premises.

One of the most meaningful of these projects has been the improvements to the backstretch bunkhouses.

In 2013, NYRA completed the first of 21 modernizations of the dormitories built circa 1959 to 1960. Designed by local practice Frost Hurff Architects, the scheme has had a transformative impact upon the lives of the workers that live at the race course during peak season. The spartan concrete blocks had seen little, if any, upgrades since they were constructed. New bathrooms, lockers, roofs, air conditioning and heating systems have made for much more comfortable conditions. 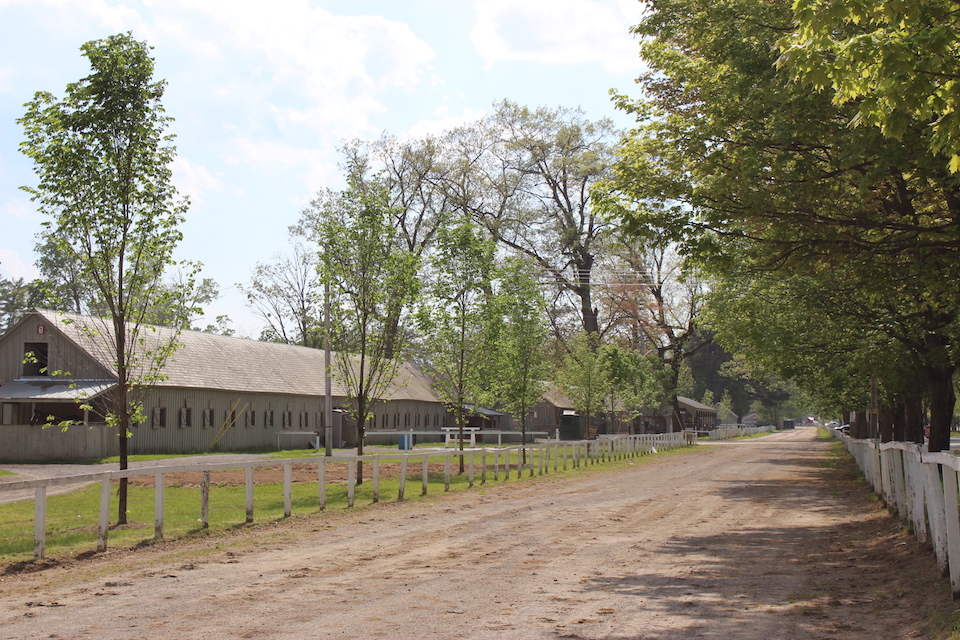 It has not only been dormitories that have seen investment. From 2016 to 2017, Saratoga Springs landscape architects the LA Group superintended a considerable tree removal, pruning and planting effort. Over 250 trees across the 350-acre property were felled. A combination of age, asphalting and vehicles moving across the site had left these trees in states of deterioration, resulting in risk to humans and horses. However, the number of trees planted easily outstripped the quantities lost. More than 850 new trees, from sugar maple, to red oak, pitch pine, American elm and white pine, were laid out across the frontside and backstretch. 130 trees were planted in Horse Haven alone.

The course has also seen new buildings. The Whitney Viewing Stand, designed by local architects Phinney Design Group, opened in 2013. The structure was conceived as a permanent landmark to commemorate 150 years of Thoroughbred racing in Saratoga Springs, and named in honour of one of the most influential figures in the track’s lifetime, W. C. Whitney.

For the first time in over a decade, members of the public were invited into this area of the backstretch to watch, at first hand, the morning training workouts, and the stand provided a bespoke raised platform from which to do so.

The stand is something of a hidden gem, but for those who know about it, it offers a much-cherished vantage point for the training ritual. The dawn workout is a special experience at any track, but at Saratoga, seeing the galloping horses emerging from the morning mist that envelopes the Oklahoma circuit takes on a magic quality.

The stand also offers a foot into the past, for its design recreates a piece of Saratoga Race Course’s lost history. The building’s form replicates that of the 1892 judges’ stand, which once stood before the grandstand. Almost every detail of the Victorian tower is recreated, from its triple-storey timber frame, to its shingle base, double-cross wooden railings and steeply pitched roof capped by a weather vane finial.

The Whitney Viewing Stand was not the only new addition that looked back to Saratoga’s architectural history.

In 2015, NYRA unveiled the Walk of Fame building, designed by Frost Hurff Architects. Sited in the back yard next to the carousel, it was built to showcase its recently inaugurated Red Jacket award, which recognizes prominent owners, trainers and jockeys. The single-storey pavilion is open to its sides and crowned by copper-pinnacled peaks, designed to echo the grandstand’s silhouette in miniature.

More changes are on the way. Developing a proposal that stemmed from the master plan exercise, in 2018 it opened the Stretch. This comprised the replacement of underutilised seating in the east end of the 1965 grandstand extension with boxes, targeted specifically to a younger audience than the traditional clubhouse occupants. With a restaurant and bar at the rear, the goal is to create a vibrant, social atmosphere to breed a new generation of racegoers. Widening its market appeal is also the motivation behind the other major construction project being planned.

In 2019, NYRA plans to complete another concept advocated within the master plan, comprising a three-storey hospitality venue adjacent to the clubhouse. The new ‘At the Rail’ building will replace the tents and trailers that are erected every season, the temporary nature of which is costly, to deliver a luxury experience for a high-spending, potentially corporate, clientele. The completion of this project will see the biggest change in the trackside panorama since the 1960s.

With these plans in hand, the physical development of Saratoga Race Course looks more dynamic now than it has done for over half a century.

An idea they ridiculed - yet would Saratoga exist without it?
The illiterate, impoverished Irish immigrant who got the meet started
The ‘Wickedest Summer Resort’
The saviour who ushered in a gilded age
Decadence and depression, but the romantic charm survived
Fears for the race course’s survival