After a few hiccups, more relaxed attitudes to gambling, and therefore the popularity of horse racing, gathered pace in the early decades of the 20th century. Many racetracks struggled to cope with the new demand, with Saratoga Race Course notably one of them, as Paul Roberts and Isabelle Taylor explain in the fifth part of their seven-part weekly series on the development of Saratoga. The extracts are taken from their book The Spa: Saratoga’s Legendary Race Course.

On 21 March, 1911, the Saratoga Association made an announcement – there would be no Thoroughbred racing that year. The year before, anti-gambling lobbyists had forced the passage of the so-called Directors Liability Law. The act restricted all forms of wagering and mandated that racetrack directors would face criminal charges if anyone were caught gambling on their grounds. Thoroughbred racing in New York crumbled. Without betting, the crowds vanished. For the next two years no race meetings were held in the state.

However, in 1913, a loophole was opened. A state court ruled that the law forbade only written bets, opening the way for oral betting, and thus paving the way for the return of Thoroughbred racing to New York.

By the close of World War I, horse racing in the U.S. was entering a great revival. In the 1920s, the number of Thoroughbreds doubled, the total races increased and purses rocketed.

It was an age of sporting heroes – Sir Barton, Man O’War, Exterminator and Mad Play among others. Once again, New York was the trailblazer state. It had the most racetracks, drew the largest crowds and the biggest handle. The Saratoga Association President, Richard T. Wilson, was praised for encouraging the return of so many big stables to the Spa after its closure.

The 1920s and 30s were decades of continuous expansion and improvement for Saratoga. It was a time of growing attendances at the race course, and the demand for boxes outstripped supply. The 1892 clubhouse, while picturesque, was simply too small and plans for modernisation were soon afoot. Architect Samuel Adams Clark designed a substantially larger replacement, and the Victorian clubhouse was demolished to make way for it.

Measuring 211 feet in length by 44 feet in width, the large building increased clubhouse facilities considerably when it opened in 1928. It housed 1,200 box seats with a total capacity of 3,000. It was the epitome in modern comfort and technology, including the extravagant feature of an electric elevator. Yet, despite brimming with all the mod cons of the age, the building lacked the aesthetic finesse of its predecessor.

The new clubhouse made few architectural concessions to harmonise with the distinctive profile of the Victorian grandstand. At three storeys tall, it towered over the grandstand. It had none of the drama or imagination of the sloping planes of the Victorian structures. Arguably, the new structure marked the end of Saratoga’s architectural golden age.

Further changes took place in the following decade. The 1930s was a decade of revitalization for Thoroughbred racing at large. The populist anti-gambling sentiment of the late 19th and early 20th centuries faded as the country was rocked by the Great Depression and legalised gambling was suddenly looked upon as a quickfire way to bolster the struggling economy. 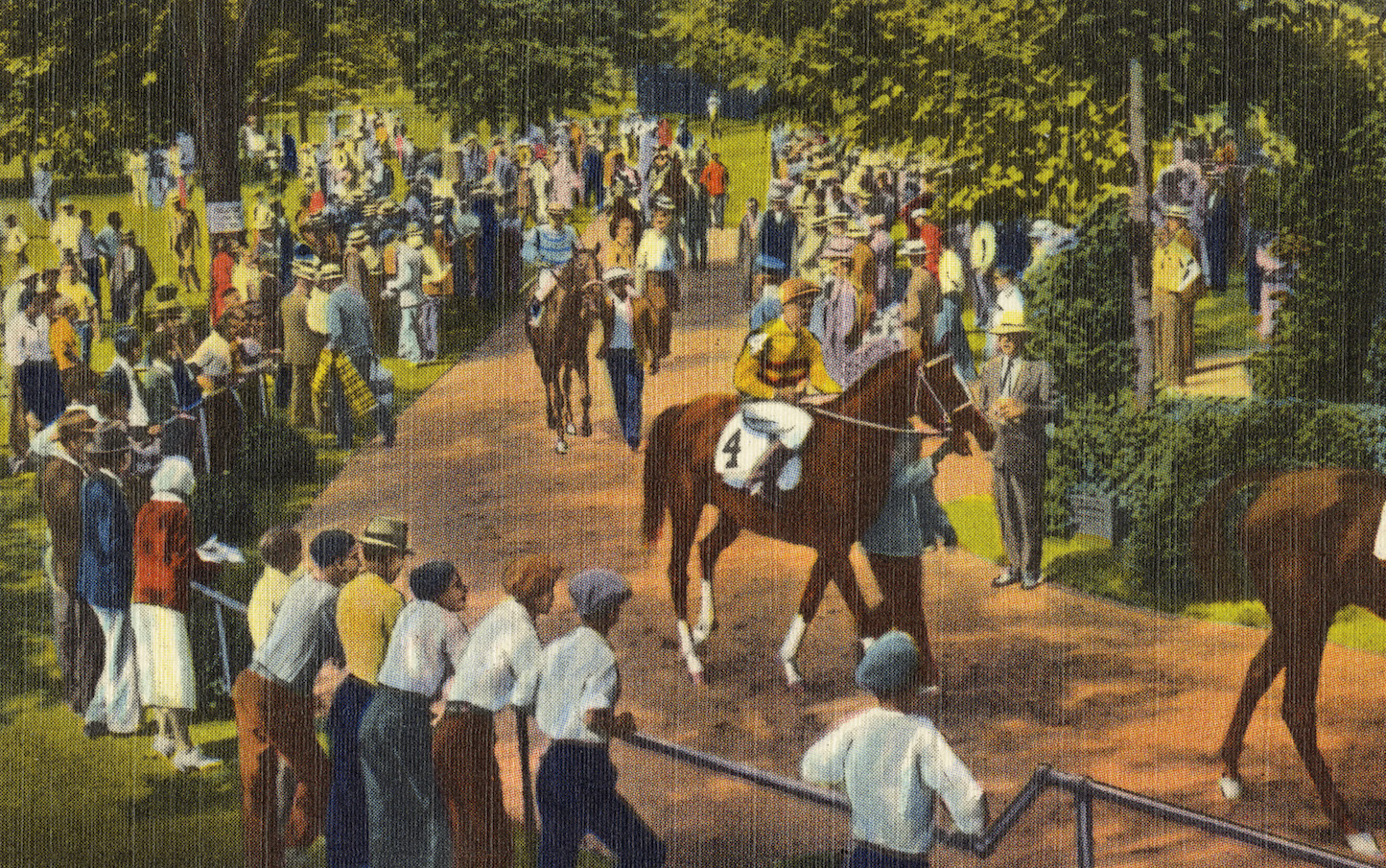 No less attracted by the lure of easy money that wagering offered in penurious times, large crowds teemed at tracks old and new. Growing numbers flocked to watch Saratoga’s racing too, and once again the Saratoga Association found itself pushed to expand.

In 1937, leading Albany architect Marcus T. Reynolds was hired to draw plans for a large betting ring extending from the back of the grandstand. Ready to receive the crowds of the 1937 season, the Reynolds extension consisted of a long, open structure bookended by two double-storey rectangles perpendicular to the grandstand. Running 360 feet in length and 85 feet deep, it vastly amplified the grandstand. On the storey above ran a terrace, partially covered by a copper canopy, offering dining and refreshment facilities overlooking the back yard.

The extension pioneered a new design aesthetic at the Spa.

In sharp contrast to the dark wood and slate-roofed Victorian grandstand and 1928 clubhouse, the betting ring made extensive use of metal roofs and ornamental white cast iron. This distinctive design aesthetic is now integral to the character of the back yard. Its shed-row roof was upheld by decorative cast iron piers, imaginatively shaped into panels depicting racing scenes and horse-head brackets. Matching cast-iron grilles railed the terrace, and continued elegantly down an ornamental staircase to the paddock. Whimsical, charming and unique to Saratoga, the ornamental ironwork was a festive, jubilant addition to the racetrack. A westward extension to the betting ring built in 1946 continued this vocabulary.

The extensions furthermore marked the transition from the tradition of deep, dark Victorian colouring towards bright white, painted surfaces. Not only was the extension painted white, but the rear and side elevations of the grandstand and clubhouse were too, resulting in the colouration familiar today.

Saratoga’s sleek new spaces provided the infrastructure for the arrival of the pari-mutuel. After an overwhelmingly positive vote in 1939 to legalise pari-mutuel wagering in New York, pari-mutuel machines and infield tote boards premiered at the Spa in summer 1940. Early pari-mutuel machines had in fact made an appearance at Saratoga during the 19th century but had never replaced the bookmakers. This time, the change was permanent.

Over $200,000 was spent readying the track. Nearly 300 betting and cashing windows were installed in the grandstand complex.

At roughly the same time, a finish line camera was placed on the clubhouse roof while freestanding camera towers rose around the track. A press box too was erected on the grandstand roof. Its facilities and view over the circuit may well have been “a distinct improvement on the old press box and result in better and more accurate accounts of local racing”, but its aesthetic impact upon the grandstand was decidedly less positive. The long box jutting from the stand’s slate roof disrupted its sleek, sloping profile and the rupture was made even more pronounced by the bright white colouring of its shingle-clad walls. 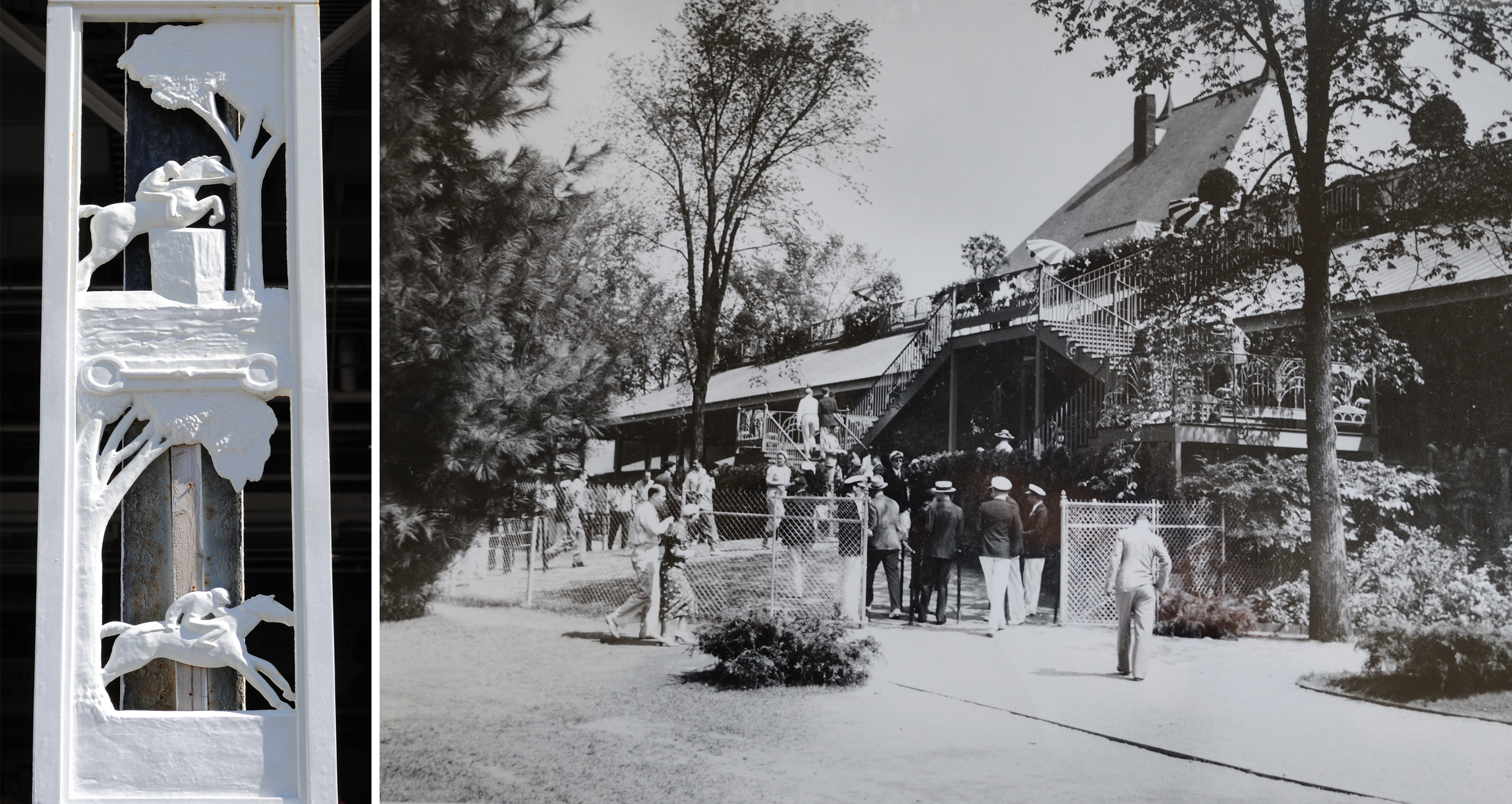 The track was now, in many ways, a very different one from that in existence 20 years before. The 1920s, 30s and 40s were decades of significant building campaigns that had pronounced impacts upon the outer garb of the frontside. Not least was the huge increase in building volume. The rebuilding of the clubhouse and the two contiguous betting ring extensions created a much larger architectural footprint with advanced amenities to cater for Saratoga’s growing legion of attendees.

What is more, its architectural complexion underwent a palpable change. The robust and dark timber-framed structures of the Victorian age, exuding picturesque charm, were succeeded by a lighter, effervescent mood characterised by cast-iron motifs and lashings of white paint. The repertoire of materials changed from slate and wood to structural steel and decorative metal, and the focus of the complex gradually began to veer from trackside to rear side.

To many, the growth spurt of these decades was not equal to the architectural and landscape highs of the Walbaum and Whitney eras and even compromised the elegance that these earlier generations had achieved in a quest for bigger, better and newer.

Undoubtedly the loss of the 1892 clubhouse was at the architectural cost of the race course, but Saratoga’s gilded age heritage still survived at its heart.

In spite of the encroachment of modern life upon the track’s fabric, its romantic charm endured.

An idea they ridiculed - yet would Saratoga exist without it?
The illiterate, impoverished Irish immigrant who got the meet started
The ‘Wickedest Summer Resort’
The saviour who ushered in a gilded age