Keeping Saratoga Race Course up with the times proved beyond the New York Racing Association for much of the second half of the 20th century, initially because other priorities and later because of lack of funds, as Paul Roberts and Isabelle Taylor explain in the sixth part of their seven-part weekly series on the development of Saratoga. The extracts are taken from their book The Spa: Saratoga’s Legendary Race Course.

In August 1953 a group of sportsmen and members of the New York Racing Commission gathered for a dinner at Saratoga Race Course to discuss its future. New York’s racing had reached a nadir, the Commission’s chairman, Ashley Trimble Cole, announced to the assembled company, and if the industry did not act quickly to reverse matters then the state would take control of the problem itself.

Since the Civil War, New York had been the leader in American racing. Yet by the mid-20th century, a handful of other states were challenging its crown.

New Jersey’s Garden State Park track had created the richest stakes race in the world, the Garden State Futurity. In 1953, the champion 3-year-old Native Dancer earned $97,725 and $66,500 for winning the Arlington Classic and American Derby respectively at Chicago’s Arlington Park; he received only $18,850 for victory at Saratoga’s Travers Stakes.

Both in prestige and financial health, the New York industry was flagging and turfites feared for the very survival of Saratoga.

In October 1955, their vision was inaugurated as the Greater New York Association, quickly renaming itself the New York Racing Association (NYRA). It was granted a 25-year franchise to run the tracks on a not-for-profit basis.

NYRA had big plans. Aqueduct was rebuilt as a state-of-the-art modern racing facility, completed in 1959; Jamaica was scheduled for closure as soon as Aqueduct was complete; and Belmont Park was rebuilt from 1962-8. 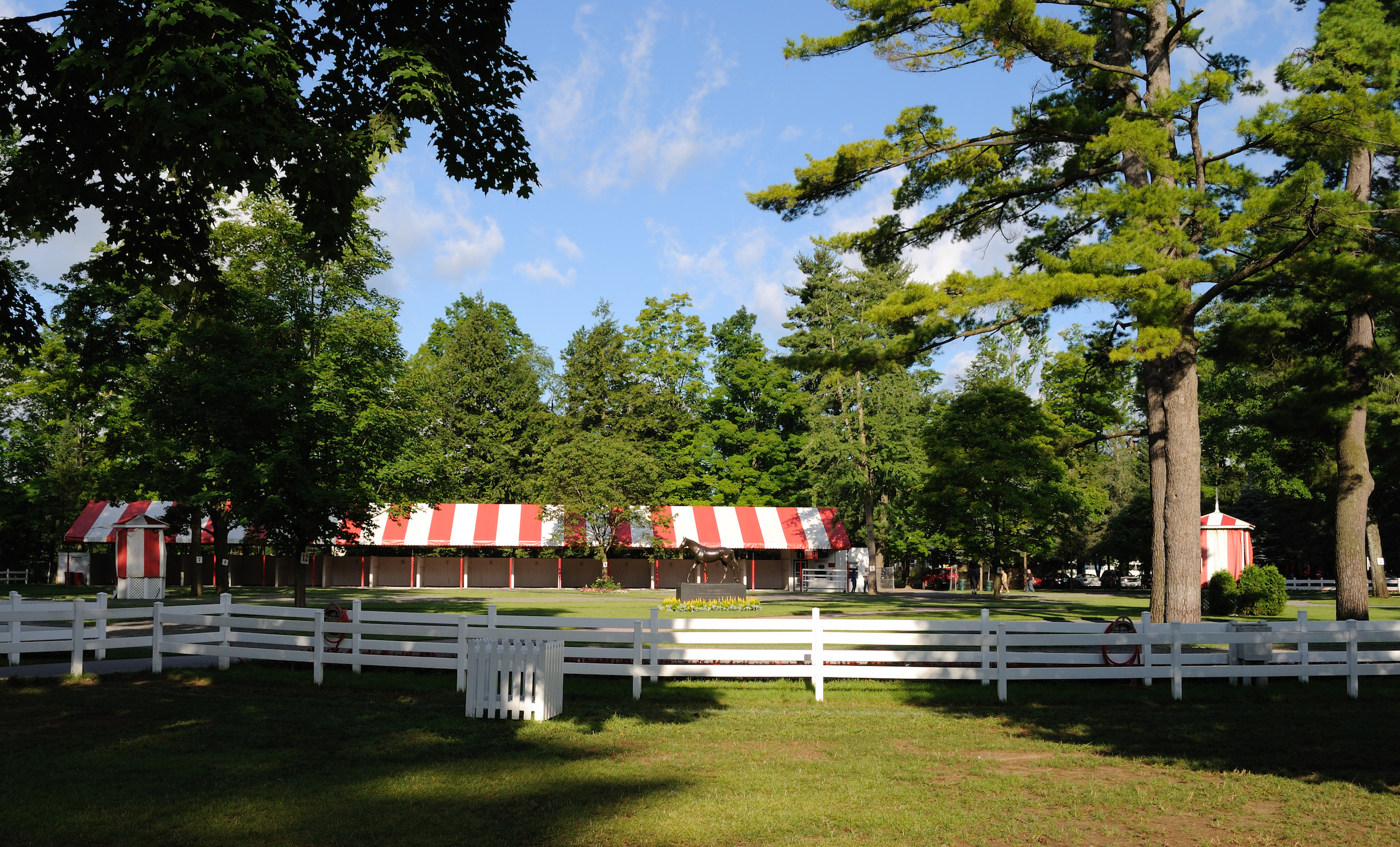 Amid this spurt of activity, though, Saratoga was left comparatively unheeded. By 1959, nearly $34 million had been spent on Aqueduct and over $7 million on Belmont Park, compared to $1 million on Saratoga.

NYRA did not forget its upstate track completely though. By the mid-1960s, the venerable old grandstand was no longer considered sufficient and NYRA enlisted leading racetrack design practice, Arthur Froehlich and Associates, to plan an extension. Completed in 1965, the steel addition almost doubled the size of the Victorian grandstand. Directly abutting its east end, the new building necessitated the demolition of the field stand and betting ring, the latter having been stripped of its original function many years earlier.

The Froehlich firm was famed for its ultra-modern grandstands, sporting the most advanced amenities and construction techniques. It was less renowned for sensitive extensions to historic buildings, and this inexperience was pronounced at Saratoga.

While the Froehlich stand reproduced the elongated shape and height of the elevation of the old grandstand, little attempt was made to achieve more than a superficial continuity between the new and the old. The steel frame of the addition was a marked contrast to the wooden trusses of the original building. The white painted elevation of the extension likewise differed from the reddish-brown stain of the old stand. Moreover, the beauty of the sweeping outlines of the Victorian roofline was not replicated.

In the Back Yard, meanwhile, the previously open landscape, populated only by trees, was progressively colonised by a variety of small structures, sculptures, canopied television monitors, picnic benches and, from the mid-1970s, the red-and-white striped canopies that continue to characterise the track’s public areas.

Controversially, the 1970s also saw great changes to the saddling ceremony. The 1902 saddling shed had been converted for pari-mutuel functions in 1963 but the saddling and walking continued in the open around the surrounding trees. In 1977, this was relocated to a new saddling tent, erected alongside the Back Yard’s western perimeter.

An end to a tradition

For so many years, the saddling of champions under the lofty tree canopy, where turf amateurs could rub elbows with jockeys and horses, had held a staunch place in Saratoga tradition. It was now an age of litigation, however, and concerns mounted that it was no longer safe to permit unrestricted public access to the horses for fear of injury. By 1986, a definite end was put to the tradition when, principally to protect onlookers from loose horses, the walking ring and saddling tent were completely enclosed by fencing. Its abolition sent shock waves through Saratoga’s veteran community.

The positive impacts of the 1960s, 70s and 80s changes are hard to discern. Yet, attendances were growing.

Between 1976 and 1983, Saratoga’s average daily on-track attendance rose from 18,894 to 26,644. As the summer spectacle of the Saratoga meeting grew in popularity, accommodating the crowds at the track became a pressing concern, spurring more architectural and landscape projects. These included a large semicircular extension to the rear of the grandstand, providing food concessions, television monitors and seating, and the creation of a four-acre recreation area in the Back Yard, featuring pari-mutuel windows, concession stands, more television monitors and picnic tables.

The changes reflected a desire to provide modern amenities to entice the crowds, but the proliferation of stalls, betting booths and screens that resulted diluted much of the overall coherency of the historic site. Its pastoral charm, for which Saratoga had so long been famed, was being eroded by carnivalesque bacchanalia.

The challenge of operating Saratoga has, by no means, been easy for NYRA. When funding was plentiful in the 1950s and 1960s, the race course was unfashionable and so not a priority for investment. In recent decades, while the track’s prestige has rallied, NYRA has faced a series of financial and political crises. Without spending power, NYRA was blocked from implementing large-scale capital works to any of its facilities. Small-scale projects and ad hoc measures were the only affordable options.

By the mid 1990s, the association’s revenues had stagnated. It was facing increasing competition from other racetracks and other forms of gambling, plus it lost a substantial market share to OTB facilities. Expenses, however, continued to rise.

In 2003, NYRA was indicted on charges of tax evasion and money laundering. The outlook was bleak. Yet the episode in many ways marked a turning point for the association. NYRA embarked on a period of self-reform. It implemented new cash-handling investment procedures, launched a comprehensive anti-money-laundering education programme, took a hard line against illegal performance-enhancing drugs, and extensively restructured its management. Insolvency, though, was looming. By 2005, NYRA was operating at a net loss of $22 million. To compound matters, its 2007 franchise was up for renewal.

NYRA had long been plagued with a chronic franchising problem. Upon its formation in 1955, the Association was granted a 25-year franchise by the state legislature to operate its tracks. At the expiration of the original franchise, NYRA was given a series of short-term extensions. This succession of interim continuations is directly correspondent to the piecemeal nature of the development works that took place at Saratoga Race Course in these years.

As the 2007 franchise approached expiration, it was by no means certain that the state would renew the association’s franchise. After months of speculation, however, in February 2008, the New York State legislature granted NYRA an extension of 25 years.

NYRA’s fortunes were looking up. It received $105 million in direct state aid and millions more in loans were cancelled in return for relinquishing to the state any claims to ownership of the land upon which the three racetracks are sited. And finally, in 2011, after a prolonged political, legal and financial struggle, a VLT (Video Lottery Terminal) facility at Aqueduct opened, providing NYRA with a considerable capital injection.

The 25-year franchise provided much-needed stability, which had been unachievable during the previous short-term agreements. Meanwhile, the VLTs offered the prospect of funds for new development. Within this context, Saratoga was confirmed as a priority target for capital works. This paved the way for the commissioning of a new, whole-estate master plan at the race course, the first in over a century.

An idea they ridiculed - yet would Saratoga exist without it?
The illiterate, impoverished Irish immigrant who got the meet started
The ‘Wickedest Summer Resort’
The saviour who ushered in a gilded age
Decadence and depression, but the romantic charm survived