The turn of the 20th Century was a time of stark contrast at Saratoga Race Course. On one hand it was an architectural golden era; on the other it was in the midst of a dark period that put a cloud over its very future, as Paul Roberts and Isabelle Taylor explain in the third part of their seven-part weekly series on the development of Saratoga. The extracts are taken from their book The Spa: Saratoga’s Legendary Race Course.

The post-Civil War years were ones of turf fever. The Preakness Stakes was first run in 1873 at Pimlico; the Kentucky Derby had its inaugural run in 1875 at Churchill Downs; meetings in California, Ohio, Illinois and Indiana were publicised in eastern seaboard turf journals; Congress even adjourned for a day in 1877 to attend a meeting at Pimlico. Saratoga, though, stood out from the crowd. With an ethic that emphasized “sports for sport’s sake”, it drew the best stables and most illustrious racegoers.

Not even Saratoga, however, could withstand the mounting anti-gambling sentiment that spread across the U.S. in the last decades of the 19th century.

An 1886 visit from Anthony Comstock, the secretary of the New York Society for Suppression of Vice, to Saratoga Springs led to 20 of its gaming houses temporarily closing down. His public vilification of gambling incited a small yet rich group of locals to a sustained reform drive.

From 1889, the track came under fire from moral crusader Spencer Trask. With a vast fortune and a wide social web, Trask was a powerful man and he embarked upon a mission to remodel the resort town into an urbane playground resort for the wealthy. Trask launched a vitriolic tirade against the track’s illegal gambling in his newspaper, the Saratoga Union.

The campaign was ill-received among Saratogians, but, in 1890, the track’s owner, Albert Spencer, gave way to pressure and announced his intention to renounce control of Saratoga Race Course.

It was no simple matter to find new management. For a short time, the Saratoga Association was blighted by successive transitions of ownership. It was not until 1892 that a permanent proprietor was found, in the form of Gottfried ‘Dutch Fred’ Walbaum.

Walbaum launched the track into one of its darkest eras. An ignominious character of the New York underworld, he made his money running a brothel and a gambling house. With these ill-gotten gains, he purchased the Guttenberg track in New Jersey. Introducing effective administration and winter racing, Walbaum transformed Guttenberg into a veritable goldmine.

However, questionable practices made the racing facility notorious. Rumours abounded that “owners experimented with electric batteries and narcotics while seeking to have their horses win races at good prices”, while the results of many races were almost certainly known before they were run.

Unsurprisingly, several eyebrows were raised when the brash Dutch Fred arrived at Saratoga. Yet, his presence lingers on at Saratoga today.

It was under his leadership that the nucleus of the present grandstand – with its sweeping slate roof and cluster of pinnacles – was built. The grandstand was part of a state-of-the-art racing complex also comprising a clubhouse and betting ring that replaced the track’s mid-century buildings and injected a sense of style into what previously had been an essentially sober and serviceable building type.

The architect responsible for the complex was Herbert Langford Warren (1857-1917). Warren was a renowned figure in Boston’s Arts and Crafts movement. He transformed the face of the race course, creating a powerful architectural presence that has dominated the site since its 1892 opening day on July 25. 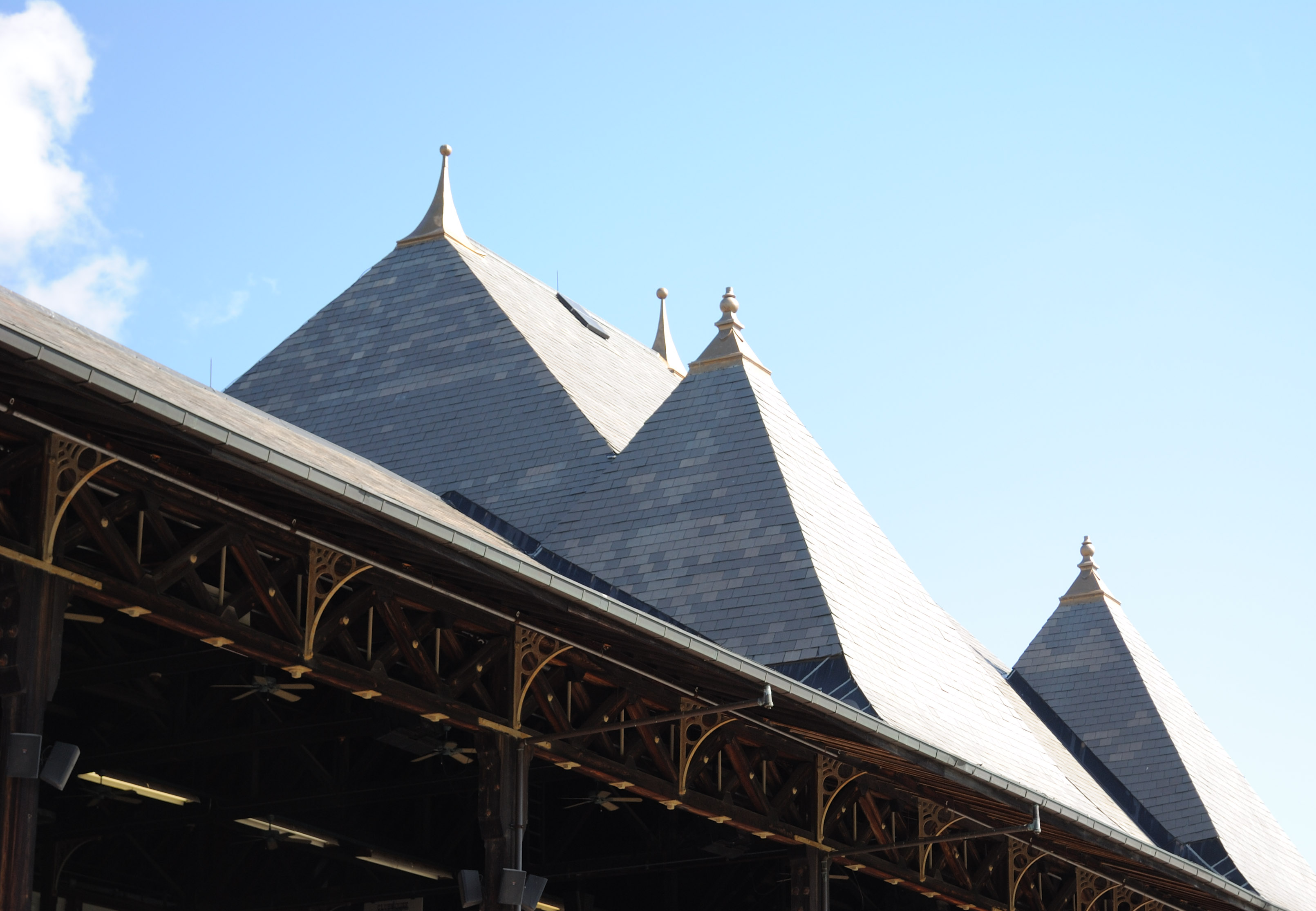 Of the complex that Warren designed, only the grandstand survives today. It is nestled, jewel-like in its proportions and ornate trusswork decoration, within the present grandstand-clubhouse complex. It is not only the oldest stand still in use in American Thoroughbred racing, but the oldest continuously used stand of any professional sport in the country.

While today the grandstand-clubhouse structure extends over a quarter of a mile along the track side, Warren’s grandstand was a mere 200 feet long. It was a wooden construction, roofed but open to all sides and the seating was raked to slope towards the track. The basic structure was functional and spartan, little different to other grandstands of its age; but it was crowned with a strikingly unique feature – a vast slate roof supported by a timber trusswork system.

The roof had a sweeping silhouette, dominated by a cluster of sloping turrets at its centre. This motif of steeply sloping peaks was symptomatic of the prevalence of eccentric roof forms under the popular Queen Anne architectural style, but it may also have had a particular model in the grandstand of South End Grounds, Boston’s baseball field built in 1888. Here, each end of the roof was demarcated by a cluster of three ‘witch’s cap’ turrets.

The concept was very similar to that used by Warren at Saratoga, but the overall effect was less refined. At South End Grounds, the grouping of conical and pyramidical turrets was cluttered and awkward; at Saratoga, the roof subtlety rose into dynamic peaks, creating a rhythmical, fluid silhouette.

At the western end of the grandstand, Warren designed a clubhouse – the racetrack’s most exclusive environment. Although it was replaced in 1928, the elegant curving structure is known from pictures. Built smaller, lower and at an angle to the grandstand, the clubhouse was a distinctly separate structure. It was two storeys, capped with a steep, slate gable roof pierced by three hip gable windows.

At the opposite end of the grandstand, Warren designed a betting ring (demolished 1963). It was a timber frame construction open to the sides that housed the stalls, or cages, or the bookmakers.

While not strictly within the law, the bookmakers were vital to the operation of the race course. All the betting at Saratoga (as at other major tracks) was handled by bookmakers, who, in exchange for a fee, were allowed to set up business at the course. Within the betting ring, each stall was elevated on stilts and bore the name of its bookmaker, below which hung the all-important blackboard itemising the entries and odds of the day’s races. Clamouring to outbid one another, the bookmakers shouted to the crowd from their raised stalls creating what must have been an atmosphere not unlike a Moroccan souk.

Further east of the betting ring, an additional stand was erected. The Field Stand, or ‘black stand’ as it became known, was located on the stretch far from the finishing line and charged a lower entrance price than the main stand.

Existing at virtually every racetrack up and down the country, field stands were used by the African-American track community – jockeys, trainers, stable boys – and racegoers until the 1960s, when the majority were razed under the impetus of the Civil Rights movement.

Lacking the architectural pretensions of the grandstand, the Field Stand was a simple, functional structure of raked seating covered by a plain gable roof.

Walbaum’s tenure at Saratoga brought with it an architectural revolution. For the first time, the racetrack’s pleasure-seeking patrons could enjoy the sport in surroundings not only commodious, but at the height of architectural fashion.

Under the surface, though, all was far from well.

Walbaum’s infamy caused a media storm. Nellie Bly, the star reporter of the New York World, poured a tirade of invectives against the “Wild Vortex of Gambling and Betting by Men, Women and Children”.

In her article, “Our Wickedest Summer Resort”, the country’s most famous journalist lambasted Walbaum’s horse racing paradise as a nexus of “touts, Criminals and Race-Track Riff-Raff Crazed by the Mania for Gold”.

Many of the most prominent stables deserted Saratoga in disgust at Dutch Fred’s administration. Racing programmes languished, with great races disappearing altogether.

Saratoga’s vacationists were themselves appalled that Walbaum postponed the opening race from 11.30am to 2.30pm to suit his own habit of late-night gambling.

The 1890s was an architectural golden era for the race course, yet by the end of the century Saratoga’s splendour was wilting. The track drew an unprofitable and insalubrious crowd and the resort as a whole was tarnished. But, this condition was not to last long. The Spa was about to secure its own knight in shining armour, and a new halcyon age was soon to dawn.

An idea they ridiculed - yet would Saratoga exist without it?
The illiterate, impoverished Irish immigrant who got the meet started