Saratoga Race Course entered the 20th Century with a dark cloud hanging over its future. Happily, however, the gloom was soon to lift, as Paul Roberts and Isabelle Taylor explain in the fourth part of their seven-part weekly series on the development of Saratoga. The extracts are taken from their book The Spa: Saratoga’s Legendary Race Course.

By the turn of the 20th century, Saratoga Race Course was at its lowest ebb. Owner ‘Dutch Fred’ Walbaum’s disreputable management and murky practices had driven away prominent stables, sent purses plummeting and solicited invectives from the national media. Help was at hand, though.

Saratoga’s saviour came in the form of politician, speculator and scion of one of the country’s most prominent families – William Collins Whitney.

Whitney was the public-spirited lodestar of New York society. He had racked up a distinguished record for exposing fraud as the corporate counsel of New York City, served as secretary of the Navy, and made a fortune in the heady days of industrial expansion, by the time his interest was piqued by Thoroughbred racing.

Whitney may have come to racing late in life, but when he turned his attention to the sport of kings in 1893, he did so with gusto. Hiring the best trainers and buying the best horses, by 1901 he ranked among America’s most successful owners, even winning the English Derby.

A new sense of respectability

In 1900, Whitney joined forces with New York financier and Saratoga partisan Richard T. Wilson Jr. to rescue the Saratoga Race Course, and the following year, the vilified Walbaum sold out for a reported $365,000 to a collective headed by Whitney.

The Whitney name brought a new sense of respectability to the faded track, which pacified many of the anti-gambling lobbyists. Indeed, everything about the Spa suddenly became gilt-edged.

No sooner was the deal was done than the reborn Saratoga Association embarked upon an immediate and momentous transformation of the track. The buildings, backstretch and landscape were coordinated in an integrated design under the direction of landscape engineer Charles Leavitt. Described as “a rare combination of engineer, artist and diplomat”, Leavitt was a dynamic choice to drive Saratoga’s renaissance.

Leavitt’s multifarious career began with railroad engineering, sewer construction and infrastructure planning before embarking on an enormously successful career as a landscape designer, designing parks, university campuses and country estates. Furthermore, by the time he was engaged by the Saratoga Association, Leavitt was building an impressive record as a racetrack designer, working at Sheepshead Bay, Belmont, Toronto, Empire City and Whitney’s private track in Long Island.

At Saratoga, Leavitt turned his attention to the track itself. He enlarged the mile-long course by a furlong, rotated it 25 degrees, slid it westward and inserted a turf steeplechase course into the infield.

The grandstand and clubhouse too were made bigger and better. The stand was lengthened by 160 feet to a total length of 750 feet, and seating capacity was increased by 50 per cent to 6,000. The remodelled ground floor was lighter and more spacious and included a new café, dining room and kitchen, telegraph room and secretary’s office. The spectator experience was furthermore improved by a remodelling of the clubhouse, which shifted its roof upwards by five feet.

The enlargement works were no mean feat. “[It] involved the purchase of all of our side of High Street,” one resident later reminisced. “Our house was placed on rollers and, in a confusion of shouting workmen and straining horses, swung majestically up the street and over a block to a new site.”

Yet, what is striking in terms of the improvement works, is how little of the 19th-century complex was changed. Given the huge funds Whitney and the Saratoga Association were prepared to pour into upgrading the facility, it is evident that they respected the 1892 buildings, both in terms of functionality and beauty. 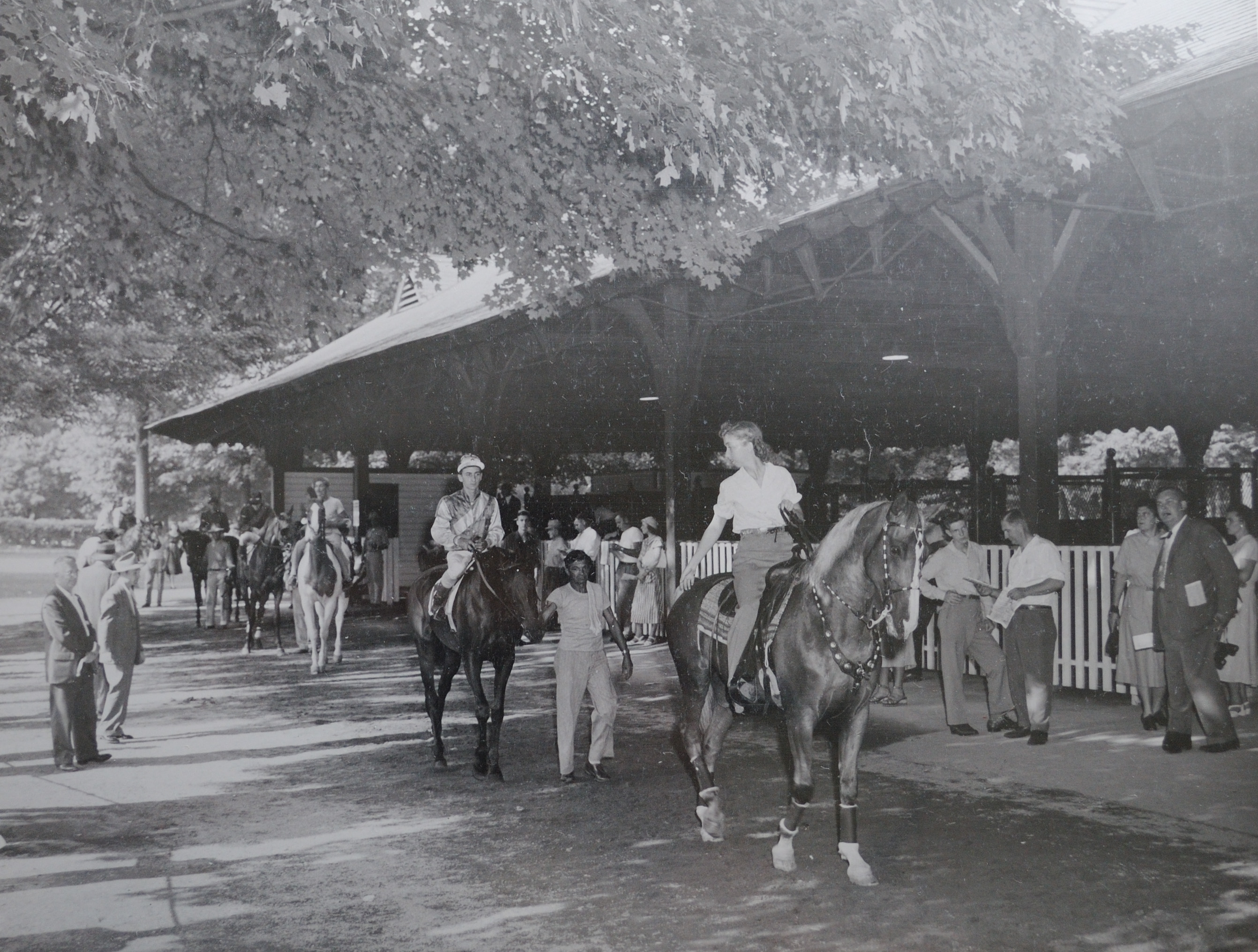 To the rear of the clubhouse, a vast saddling shed was erected, 240 feet by 72 feet. It stood at the heart of the paddock, a vast lawn behind the clubhouse within the wider expanse of the back yard. The paddock was the site of the great Saratoga tradition that took place from the earliest days of the Saratoga Association – the saddling of the horses under the trees surrounded by jockeys, grooms, trainers, owners and clientele. The groupings of tall trees that populated the paddock served as informal stalls and exercise rings. Anyone and everyone could here get within touching distance of the equine stars. In the latter half of the 20th century, this area became infiltrated by a jumble of booths and wooden fencing, but in Whitney’s day it was an open grassy tract dominated only by trees.

The degree to which the Saratoga Association prided itself on creating a bucolic setting cannot be overestimated. The back yard’s lawns and flowerbeds were refreshed; trees and shrubs were planted to define walkways and roadways and to create welcome shade near the saddling shed. A new lease of life had been infused into the race course.

Whitney also turned his attention to the backstretch. Under the new leadership, the race course property nearly doubled in size, most visibly with the expansion of stabling south of the track.

A number of private stabling compounds were constructed, beginning in 1901 with Sanford Court, built by carpet magnate John Sanford. This was followed by Clare Court, built by one of the world’s best breeders, August Belmont Jr., circa 1902, and Madden Court, by celebrated horseman John E. Madden.

Belmont, Sanford and Madden were no ordinary turfmen; they were among the most prominent, most influential and wealthiest horsemen of the day. Thus, their construction of private stables at the track is telling proof of the widespread confidence innately awakened by the Whitney name. The dark days of the Walbaum tenure were dead and buried and a new gilded age was beginning.

Whitney considered the improvement of the backstretch fundamental to his grand vision for Saratoga. With Leavitt’s help, Whitney aimed to transform Saratoga into the nation’s leading Thoroughbred training and sales centre. In 1902, he purchased land adjoining Horse Haven to fulfil this plan. It provided the opportunity to construct the race course’s third exercising track plus additional stables, modernising Saratoga into a grand training facility.

Distanced far from the frontside, the new stables and track became collectively known as Oklahoma. They were an immediate success. “Horse Haven had been so transformed that the oldest racing man wouldn’t know it,” rhapsodised the Schenectady Gazette.

The building and landscaping works both in the public and training areas testified to the substantial investment on behalf of the new owners that gave a clear message of their ambitions for the track. Pushing its recent past aside, Saratoga Race Course was entering a new century and looking forward to a new future.

An idea they ridiculed - yet would Saratoga exist without it?
The illiterate, impoverished Irish immigrant who got the meet started
The ‘Wickedest Summer Resort’