It’s a story of highs and lows, gangsters and politicians, millionaires and visionary entrepreneurs. Indeed the evolution of Saratoga Race Course, one of the most remarkable in racing history, would probably not have begun at all without an idea that received nothing but derision when a young man came up with it more than 200 years ago.

To mark the 2018 Saratoga meet, which begins in less than two weeks, here we begin a seven-part weekly series looking at the development of Saratoga. It is based on the book The Spa: Saratoga’s Legendary Race Course by Paul Roberts and Isabelle Taylor.

When a young and ambitious lumberman named Gideon Putnam built a tavern opposite a local mineral spring in a frontier New York hamlet at the opening of the 19th century, his neighbours ridiculed the undertaking. “Putnam’s Folly” they nicknamed it. However, it was Putnam who had the last laugh. By the close of the century, the tavern was renowned as the centrepiece of America’s most successful spa resort.

The hamlet was, of course, Saratoga Springs. Countless generations had long been drawn to the area’s springs for their curative powers, but, after the arrival of the quick-witted Putnam, the potential of Saratoga’s precious natural resource was seized.

With his own tavern – later renamed the Union Hotel – as a nucleus, Putnam created a spa resort. He excavated, tubed and promoted numerous springs; donated land for a church, school and cemetery; laid out the elm-bordered avenue today known as Broadway; and, as visitor numbers grew, began construction of a second hotel, Congress Hall, in 1811.

The queen of America’s resorts

Saratoga’s waters were lauded as a cure-all, treating everything and anything from gout to ulcers to obesity. Soon, though, the resort’s health benefits subsided next to the pursuit of pleasure, and the town became the hub of the American tourist industry.

Pleasure-seekers from across the land were drawn to its hotels and boarding houses. Friends, business associates and strangers alike joined in dancing, banquets and games.

In summer 1818, a record number of 4,200 visitors flocked to the town’s numerous hotels. These figures soared further after 1832, when the new railroad connection vastly improved journey times and comfort. In 1833, its permanent population of 2,000 swelled with an intake of 8,000 summertime visitors.

As the 1830s progressed, Saratoga reigned as queen of the nation’s resorts. It was in this decade that the first public opportunities for gambling were established. With its lively and unorthodox lifestyle, Saratoga Springs was, from its earliest days, marked by an intertwining of tourism and gaming.

Saratoga’s first racetrack, the Saratoga Trotting Course, emerged from the glint of this gambling flame.

Previously, impromptu sprints had been held on the streets of the village, with horses and their riders hurtling along its thoroughfares at such headlong speeds that the town officially banned the activity in 1825. And, although the first permissions to build a racetrack were sought in the 1820s, it was not until the 1840s that organised racing got underway.

In fact, racing had technically been illegal in New York since 1802.

Puritan leaders had succeeding in outlawing “all racing and running, pacing and trotting of horses, mares, geldings, for any bet or stakes, in money, goods or chattels, or other valuable thing”.

However, state fairs provided a perfect foil for conducting the activity in all but name. By the mid-19th century, harness racing was a much-loved and tremendously successful component of the county agricultural fairs, and a loophole was found to dodge the irksome anti-racing laws. “Horse races” became “trials of speed” and “exhibitions of horses” – an ideal camouflage for racing that Saratoga was soon to capitalise upon.

The New York State Fair arrived in Saratoga Springs in September 1847. With it came a flurry of building activity, preparing a complex just east of the village boundary to host the fair’s visitors and breadth of displays. Meanwhile, on a nearby patch of land, local impresarios Alfonso Patten and James M. Cole began developing a new trotting course. The chosen site was located on the north side of Union Avenue, opposite the present-day course. Known now as Horse Haven, it is still in use today. 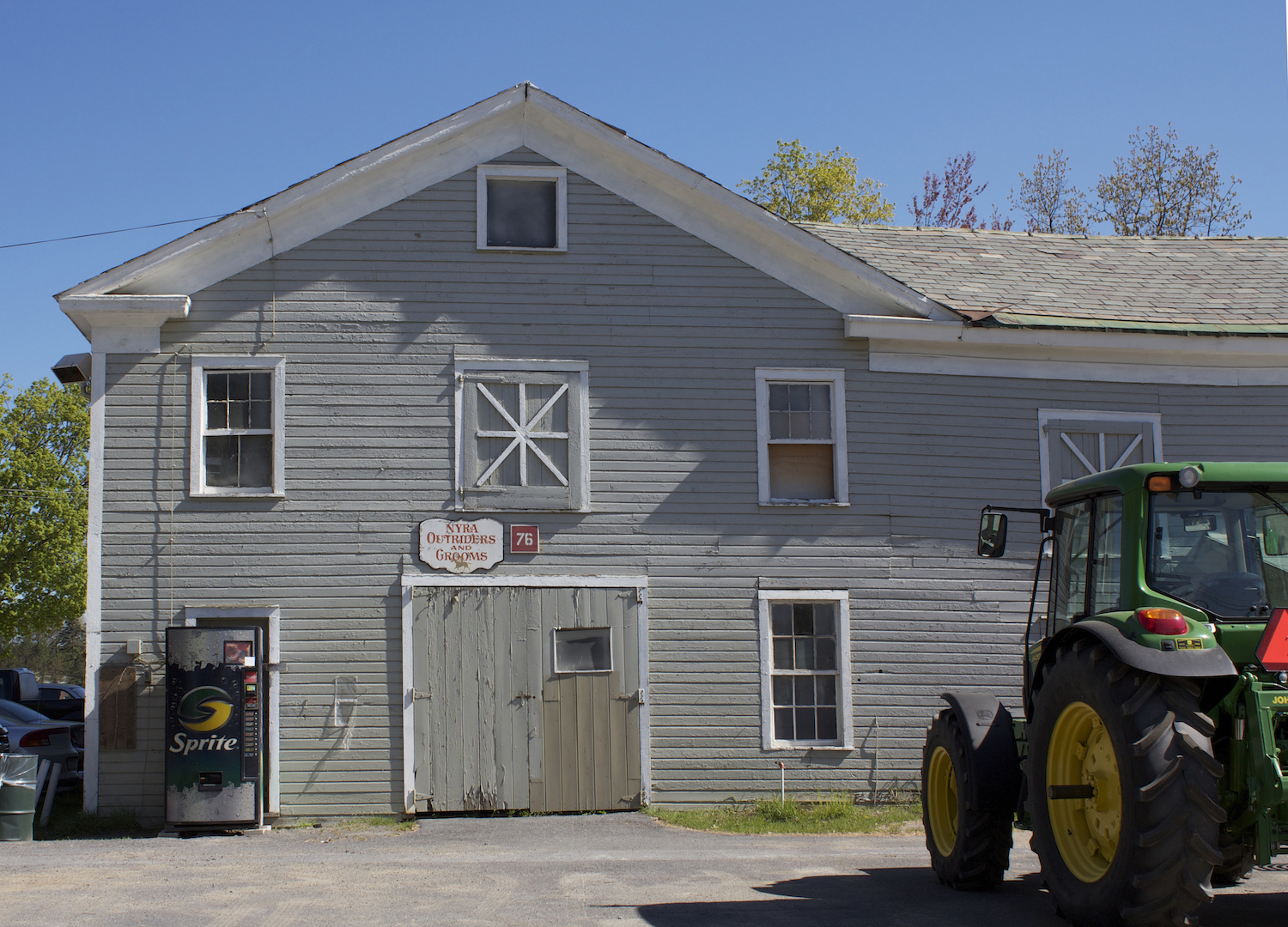 On 14 August, 1847, a day of racing was organised to a crowd of 5,000. This was, in fact, a whole month before the State Fair opened, quashing any credence to the pretence that this was a fair exhibition. More race meetings were advertised within the fair’s programme, including a race for “running horses” – the first official Thoroughbred race to take place at Saratoga.

The oval track was laid out seven furlongs in length and about 60 feet wide on an even stretch of land. Carriages lined up along its straight, two deep on opening day. One dollar gave admittance to the grandstand, while a seat in a lower stand, probably in the infield, cost 50 cents.

While no trace of the public stands remain, it is very likely that several buildings still standing at Horse Haven date from this early period. An icehouse, farmhouse and a large barn within the infield of Horse Haven’s track share Greek Revival detailing typical of pre-1850 domestic construction. Together, they may have constituted part of an earlier farm.

Following the inauguration of Horse Haven as an organised racetrack in 1847, these early farmstead buildings were joined by others. Scattered groupings of stable and kitchen buildings appeared in the infield in the late 1840s to 1860s, clustered in haphazard groups. As part of the modern racecourse’s backstretch, they remain as much a part of the Saratoga season today as they were in the days of Pattern and Cole.

The trotting course was enthusiastically received. The Spirit of the Times described the course as “a very pretty one … the Stands are good, and the Proprietors Messrs. Patten and Cole, civil and obliging”.

In truth, though, the course was narrow, covered with “piny growths” and with a grandstand far too small to hold the ardent spectators. Nevertheless, for 16 years it served as the popular staging ground for Saratoga’s trotting races.

Soon though, racing operations at the Spa were to step up a gear. Thanks to the entrepreneurial vision of an Irish pugilist, erstwhile burglar and Tammany Hall racketeer dubbed “Old Smoke”, Saratoga was to get its first Thoroughbred racetrack.

Find out more in next week’s instalment.