One of Hong Kong’s most popular sons, Tony Cruz, and Dubai-based American Doug Watson caused the biggest fireworks in the TRC Global Rankings last week as the level of competition worldwide at last began to crackle with excitement after a relatively uninspiring January.

The stallion Uncle Mo was the most significant climber in the U.S., where three more stops along the Road to the Kentucky Derby (more of that tomorrow) took centre stage alongside the continuing emergence of the Kentucky Oaks-bound Unique Bella and a G2 win by Bob Baffert’s Dubai World Cup possible Hoppertunity.

Cruz, whose six jockeys’ championships and two trainers’ titles have brought him rock-star status in racing-mad Hong Kong, gained no less than seven rankings points on a classy card at Sha Tin on January 30. He has now reached #13 in the world trainers’ standings (up from 17).

Main contributor to his total was 6-year-old Peniaphobia, the 2013 Hong Kong Sprint winner, who beat off some of the fastest horses in the Far East to win the $1 million G2 Centenary Sprint Cup. 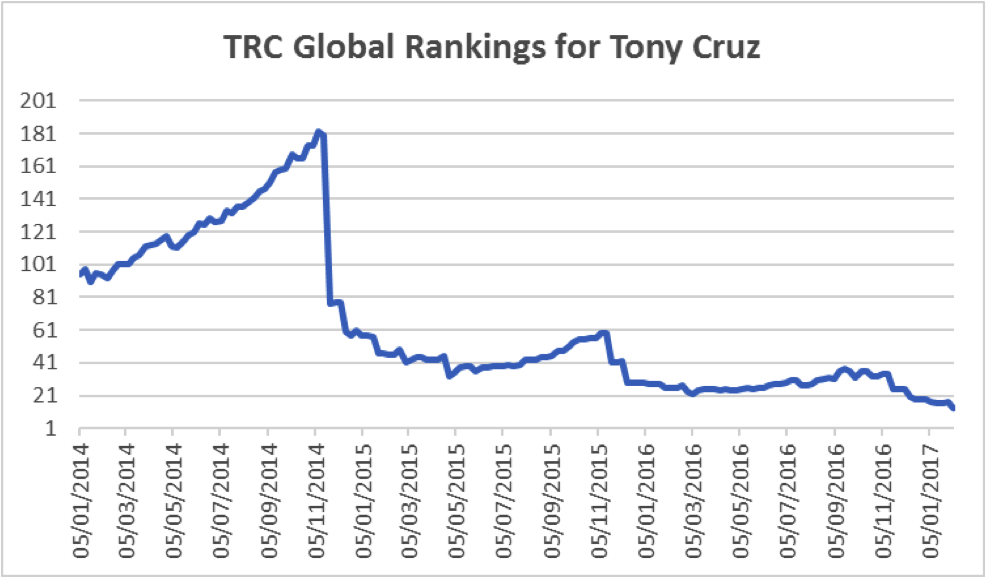 That puts the 60-year-old Cruz at his highest ranking in the life of the TRC Global Rankings data, as the accompanying graph illustrates.

He is, of course, #2 in Hong Kong behind John Moore, who had another day of fabulous success on that same Sha Tin card. Helene Paragon led home a Moore 1-2-3 in the $1.25 million G1 Stewards’ Cup (with old favourite Able Friend an unlucky third and another Moore star, his Hong Kong Derby winner Werther, making an low-key seasonal reappearance in sixth), and he also saddled Not Listenin’tome to finish third behind Peniaphobia.

Plenty of rankings points there for Moore, but such are the standards he has set in the past that the six with which he improved on his previous week’s total were not enough to lift him out of eighth place.

Meanwhile the Dubai World Cup Carnival is gathering pace, and Doug Watson was the chief beneficiary, in rankings terms, after last Thursday’s action. 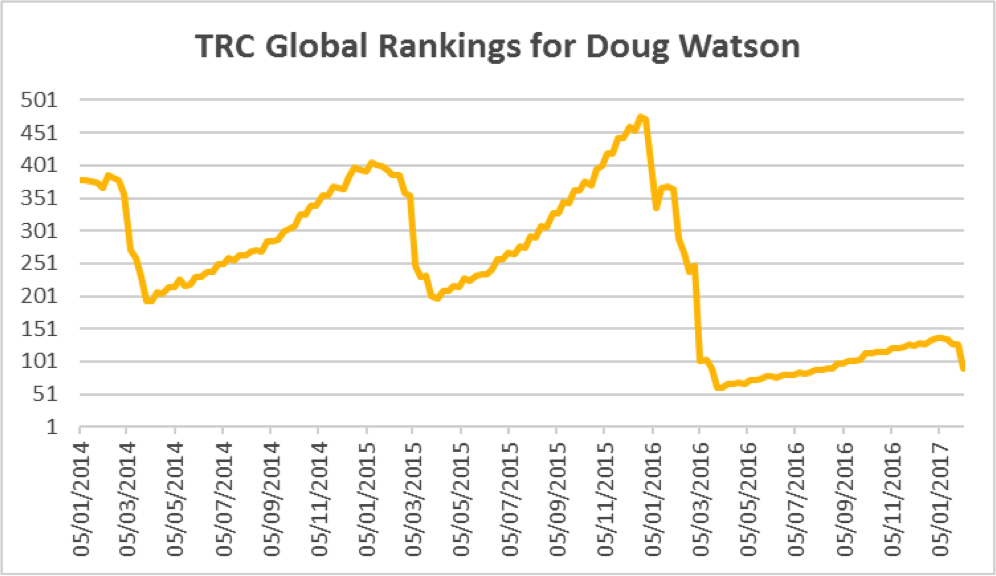 The American, who has seven runners on today’s Carnival card at Meydan, scooped up a G3 via Cool Cowboy and saddled the runner-up in the G2 Al Maktoum Challenge Round 2. That meant a ten-point gain (the biggest anywhere last week) and sent him into the top 100 in the trainers’ standings (up from 128 to 91). As can be seen by the graph, he is back to the same sort of position he was in at this stage last year - just before he peaked on World Cup day. 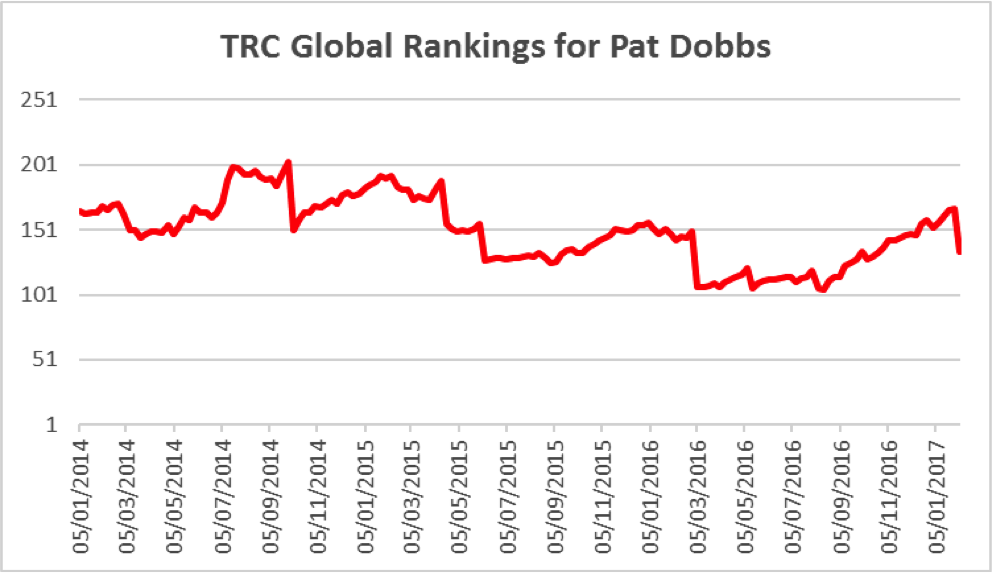 Stable jockey Pat Dobbs, whose ranking is also shaping the same way it was 12 months ago (check out his graph), gained seven points to move from 167 to 134 in the jockeys’ rankings.

Hong Kong-based Brit Neil Callan did even better, though, gaining eight points to climb from 123 to 99 (helped not inconsiderably by his ride for Cruz on Peniaphobia).

The Al Maktoum Challenge at Meydan, incidentally, was won by the globetrotting South American mare Furia Cruzada, who has been featured in the past on TRC. She is now in the care of UAE-based Frenchman Erwan Charpy, who is best known for his work with purebred Arabians.

The 5-year-old was trained by John Gosden at Newmarket for last summer’s European turf campaign, in which she competed at the highest level and added a second in a Royal Ascot G2 to her CV. The Meydan race, however, was on dirt, which may be Furia Cruzada’s best surface (she won two G1s on it in South America) and she is now being considered for the Dubai World Cup.

While the quality of the racing worldwide understandably improved last week, you ain’t seen nothing yet. It’s been particularly quiet in Group-race terms for the Aussies recently, which has meant a lean time for them in the rankings, but just wait for Saturday’s racing.

Not only will Caulfield stage Australia’s first G1 of the year (the 1400-metre C.F. Orr), it will also feature returning superstar sprinter Chautauqua in a G2, while the great mare Winx will be at Randwick for the G2 Apollo Stakes, where she will be taken on once more by Godolphin’s outstanding middle-distance performer Hartnell.