Uncle Mo and Curlin make significant forward strides in the latest edition of the world rankings this week after a weekend that highlighted the potent effectiveness currently evident among the elite American stallions.

U.S. sires now occupy four of the top eight positions in the world rankings, and ten of the top 20. Tapit, who strengthened his position as world #4 thanks largely to the exciting Unique Bella’s Santa Anita G2 win, remains the poster boy for the American stallion business, but watch out for the fast closing Uncle Mo, who leapfrogged some of the highest-achieving sires around the planet to move up four places and is now world #7 (and third on the U.S. list). 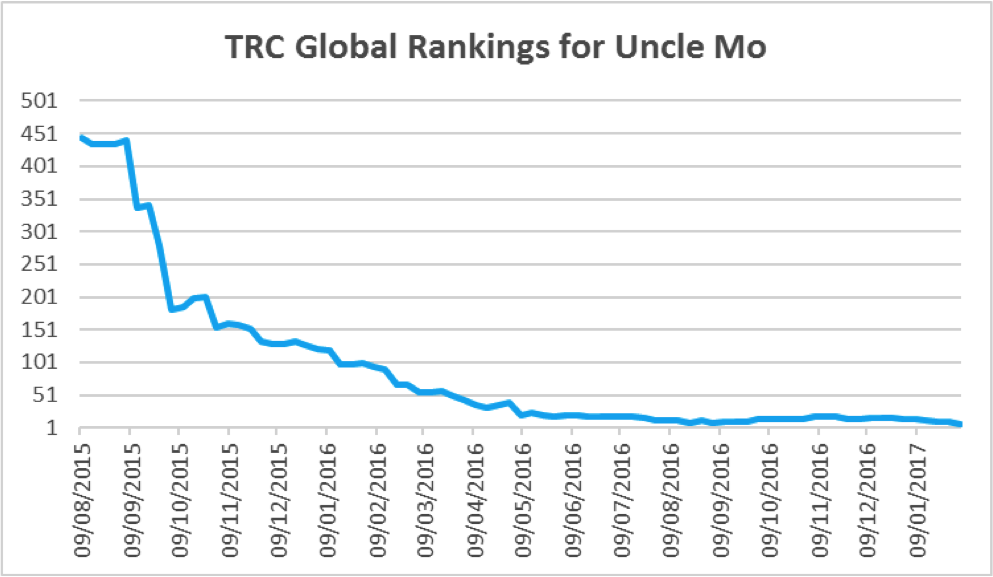 What is truly amazing about that is that the Ashford Stud stallion is in just his third season. At the moment (unlike every other sire in the top 50) he has only two crops running for him, and the TRC Global Rankings are based on all group and graded performances over a rolling three-year window. The graph of his two years in the rankings list shows how swiftly he has made his mark.

His surge into the top ten gave a hint of useful versatility as it came on the back of a five-point gain courtesy of two wins: Royal Mo’s G3 Robert B. Lewis Stakes on the dirt at Santa Anita on Saturday, and, earlier the same day, another G3, but this time on the turf at Randwick in Australia by the 3-year-old Man From Uncle.

The increasingly effective Curlin is one place behind Uncle Mo, having climbed from ninth on the back of a two-point gain. Particularly noteworthy about that, of course, is that this was down to his son Irish War Cry winning the Holy Bull at Gulfstream on Saturday - and in that colt the Hill ‘n Dale stallion has a representative who could go onto significantly better things.

Candy Ride, meanwhile, is now America’s fifth-ranked stallion, a two-point gain being enough for him to thread his way through a tightly packed group in the teens, moving from world #16 to 12th.

A little further down the standings, Uncle Mo’s fellow Ashford Stud inmate Lookin At Lucky shoots up 28 places to joint #49 thanks to a six-point gain - achieved partly because of Accelerate’s third place behind Hoppertunity in the G2 San Antonio on dirt at Santa Anita on Saturday, but mainly because of a 1-2-4 in the G1 Chilean Derby over a mile and a half on turf at Valparaiso the following day.

Back to Unique Bella: her rider, Mike Smith, was another significant climber, gaining three points to move to ninth in the jockeys’ standings (from #10), while trainer Jerry Hollendorfer gained two points and two places and is now 22nd in the world trainers’ list.