A bold endeavour could be on the verge of reaping magnificent rewards at York’s Ebor Festival tomorrow when South American import Furia Cruzada takes her chance in the G1 Yorkshire Oaks, which is a ‘Win and You’re in’ qualifier for the Breeders’ Cup Filly and Mare Turf on November 5.

Her part-owner, Fernando Fantini, of Haras Cachagua, is under no illusions as to the size of his homebred’s task in a race set to feature Irish Oaks heroine Seventh Heaven and Breeders’ Cup Turf winner Found. But, against that, Furia Cruzada heads to York in fine fettle for John Gosden, having run two fine recent races in defeat in the G2 Duke Of Cambridge Stakes at Royal Ascot and G2 Lancashire Oaks at Haydock.

Another bold showing in the £340,000 Yorkshire Oaks would further justify the decision to ship her all the way from Argentina, a trip which took months out of her schedule.

“She’s not a good traveller,” says Fantini, a former international polo player. “When she arrived in Amsterdam [en route to Newmarket], she got pneumonia, which meant she had to spend an extra 10 days there. She nearly died.

Settled into the rhythm of British racing

“Finally, she arrived in England in June last year. She spent some time with [pre-trainer] Ed Peate in Newmarket before going to John Gosden’s.”

Connections trod carefully with the now 5-year-old mare, exerting a patient approach that meant her European debut didn’t come until the G3 Winter Derby at Lingfield in late February. Sent off at 16-1, she ran well in third behind Grendisar.

Since then, she has run another three times, and she turned in a strong performance last time out, when a closing second to Endless Time in the Lancashire Oaks. A versatile filly who has seemingly now settled into the rhythm of British racing, she has acquitted herself well from a mile to a mile and a half and on varying types of ground during her brief European campaign to date.

Of course, Furia Cruzada would not be competing in Europe had she not already established herself as a leader of her division in South America.

Bred by Fantini in partnership with Alejandra Sanchez’s Haras Dadinco, who own 50 per cent, she won four races in her native Chile before heading to Argentina, where she struck twice at G1 level.

Surprise news from the sales

“I bought her dam, Nuestra Machi, at the sales and ran her in my colours,” says Fantini of the daughter of Hussonet, who is closely related to Chilean champion Val Gardena. “She ran seven times and won three races. She was a good mare. 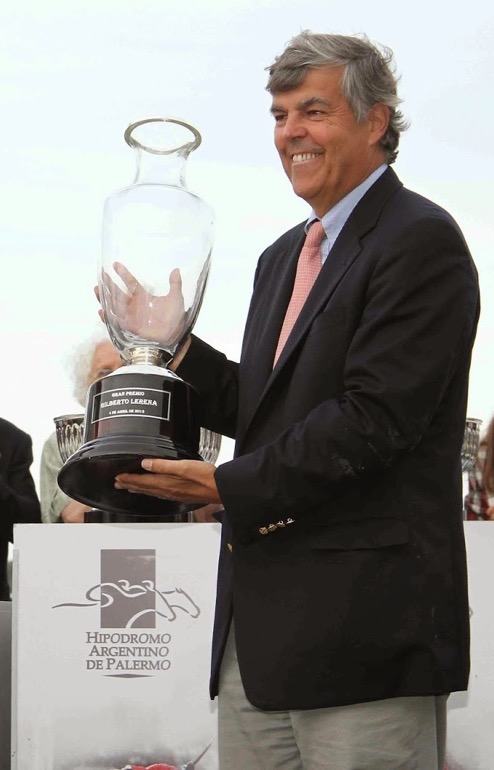 “When she retired, I did a deal with Haras Dadinco, where six mares and their foals would be owned in a 50 percent partnership.”

Furia Cruzada is the best performer sired by the Storm Cat stallion Newfoundland, who stands at Haras Dadinco. A regally-bred horse who cost Coolmore $3.3 million as a yearling, he won in Ireland as a 2-year-old and was later G1-placed for Todd Pletcher in the U.S. Following a stint at stud in Kentucky, he took up permanent residence in Chile, where he has become a multiple stakes-producing sire.

“The idea was that we would sell the six foals as yearlings, and so Furia Cruzada went to the sales,” recalls Fantini. “I was in America when the sale was on and assumed she had been sold. But the next day they told me they had kept her - we had meant to keep another but she had sold for good money so they had decided to keep Furia Cruzada. It’s pure luck that we have her today.”

How it clicked in Argentina

Furia Cruzada was sent into training with Antonio Abarca. She won her second race and went on to fill the frame in eight of her nine subsequent starts in Chile, notably when the wide-margin winner of the 2014 G1 Alberto Solario Magnasco and G2 Haras de Chile, both at Hippodromo Chile. She was also second in the G2 Gran Premio Criadores Salvador Hess Riveros and third in the G1 Tanteo de Potrancas.

“The trainer thought she was a very good filly from the beginning,” says Fantini. “She ran fifth first time out when she was very green. Second time out, she won.

“Then she won a stakes race and then a Group 1.

“There aren’t many good races for older mares in Chile so I convinced my partners to send her to Argentina, where there is a good winter programme at Palermo. I thought even if she got stakes-placed, it would be good for her dam.”

Furia Cruzada made her first Argentinean appearance for trainer Alfredo Gaitan Dassie in the G1 Grand Premio Longines Asociacion Latinoamerica in March 2015 but disappointed in 11th.

However, then it all clicked. Next time out at Palermo, she turned in a much improved performance to take the G1 Gran Premio Gilberto Lerena and later followed up in the G1 Gran Premio Criadores, another ‘Win and You’re In’ race for the Breeders’ Cup (for the Longines Distaff) in which she defeated Argentinean champion Kalithea.

“She didn’t travel well and didn’t run that well first time out in Argentina,” says Fantini. “The second race [the Gilberto Lerena] was on turf. She hadn’t run well on turf in Chile but we said ‘look, we’re here, we have to run’.

“She runs and she wins! And then she won the Group 1 on dirt.”

Thus a plan was hatched to take their South American star on an international campaign. As a G1 winner on turf, Europe naturally held plenty of appeal, as did the idea of sending her to John Gosden, who was well known to the Fantini family from his days with Charlie Whittingham.

Even though Furia Cruzada arrived in Newmarket last summer, there was never any temptation to kick on her with last autumn, as Fantini explains: “A lot of horses have come up to the U.S. from South America and all the old, good trainers would say that it was best to leave them at least eight months before running. With the odd exception, that is still true. So we went slowly with her.

“She ran well in her first start at Lingfield [in February]. Her second race, in the Dahlia Stakes at Newmarket [when fifth], wasn’t so good but historically, horses who have travelled run well in their first start and not so well in their second - [Chilean G1 winner] Dacita is a recent example.

“Then she ran very well in the Duke Of Cambridge Stakes at Royal Ascot, even though a mile isn’t her true distance.”

Fantini is no stranger to success in South America, where he owns shares in a number of stallions, including Grassy, a G1-placed son of El Prado, who stands at Haras Puerta Da Hierro in Chile, and G2 Elkhorn Stakes winner Unitarian, a new recruit for 2016.

Among the sizeable broodmare band that stretches from South America to Europe is Suffrage, dam of multiple G1 winner Suggestive Boy, and Istihaary, a half-sister to Gosden’s G2 Queen Mary Stakes winner Maqaasid, who is the dam of G1 winner Il Fornaio.

But victory at the highest level in England would mean a tremendous amount, not least because Furia Cruzada carries the Chilean Derby-winning Fantini colours that have been in his family since 1910.

“She is better on a flat track - she didn’t enjoy the dip at Newmarket - so York should suit,” says Fantini, who is unable to make the trip to York due to prior engagements at Del Mar. “And she stays a mile and a half. The only worry is firm ground. It’s a tough race, but we’re hopeful.”

Found is clear favourite with British bookmakers for tomorrow’s race at around 7-4, but Furia Cruzada is not without a chance, and is as short as 12-1.