Lester Piggott and Bill Shoemaker rode until they were 59, and the current world record holder for the number of career wins, Brazilian Jorge Ricardo, is still going reasonably strongly at the age of 56, so it’s perfectly possible for jockeys to keep on mixing it with the best well past an age where other top-flight exponents of similarly physical disciplines have ceased to be competitive.

As a glance down the list of leading riders in the latest TRC Global Rankings illustrates.

Which proves the extent to which owners and trainers value experience in Group and Graded races. Take a look at this TRC article from last October on the top young riders in the rankings at the time - there were just 12 of them aged 25 or under in the top 100.

Pride of place among today’s ‘old timers’ is Hall of Fame jockey Gary Stevens, who will hit 55 a week on Tuesday. Stevens, who was ranked 11th best U.S.-based jockey of the last 50 years in a TRC Racing Industry Poll in December, is still riding close to his magnificent best. Indeed, surely one of the most memorable triumphs of a career littered with memorable triumphs was aboard Beholder in that gut-wrenching duel with Songbird in the Longines Breeders’ Cup Distaff just 15 months ago.

And the 54-year-old showed his prowess is still intact only last Saturday, riding Streamline to victory in a G3 at Oaklawn Park, which helped nudge him up to #36 in the latest global standings. 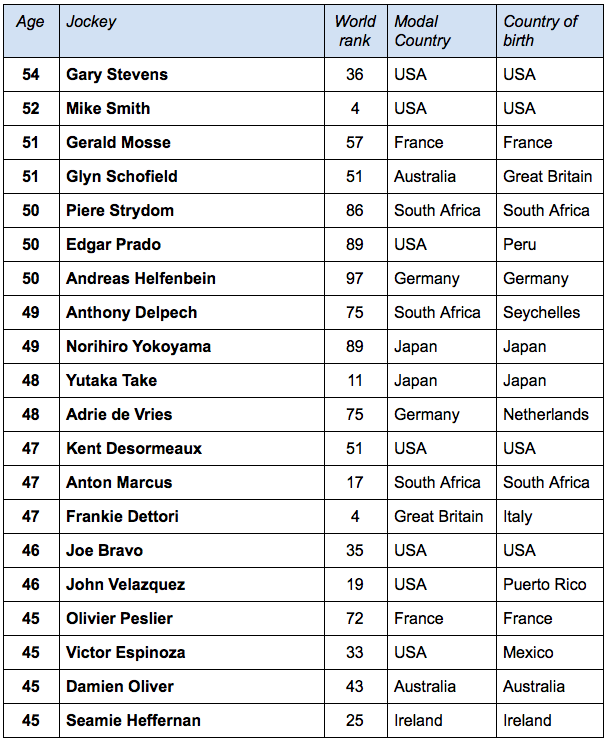 Stevens isn’t the only rider on this list who shone at the weekend either. The 45-year-old Aussie Damien Oliver won two G3s at Flemington as well as riding Missrock into third behind Redkirk Warrior in the G1 Black Caviar Lightning Stakes, the best race in the world last week. That meant a seven-point gain week on week for the three-time Melbourne Cup winner.

Oliver is the second oldest Australia-based rider in the top 100, behind 51-year-old Glyn Schofield, who was born in the UK but raised in South Africa. As well as riding in South Africa, Schofield spent four seasons in Hong Kong before emigrating to Australia ten years ago. His son, Chad, is ranked 441 in the TRC jockeys’ standings.

Ironically, Schofield is the only British-born rider aged 45 or over in the top 100. The only GB-based jockey in the list is 47-year-old Frankie Dettori, who of course hails from Italy.

Oldest European is Frenchman Gerald Mosse, who turned 51 last month. Mosse, who has ridden the winners of more Hong Kong International Races (8) than anyone else, is one of just five jockeys to have won both the Melbourne Cup and the Prix de l’Arc de Triomphe (along with Bill Williamson, Pat Glennon, Mick Kinane and Ryan Moore). He was also the regular jockey of famed 1991 2-year-old Arazi, although not for the incredible Breeders’ Cup Juvenile win that year, when the colt was ridden by Pat Valenzuela.