Regan Bayliss. Get used to the name. If he’s not one of the world’s leading riders within the next decade, something will have gone wrong.

Bayliss is just 20, yet he’s already being talked about throughout Australia as the next big thing, particularly in Victoria, where he is based.

He is also the biggest climber in all the TRC Global Rankings this week, thanks to a G2 double at Flemington on Saturday, which fired him 66 places up the jockeys’ standings to world #132.

The first win was aboard perhaps the most significant horse in his career so far, the Notnowcato 6-year-old Redkirk Warrior, who in March provided Bayliss with his first G1 winner when he took the six-furlong Lexus Newmarket Handicap at Flemington in March (see YouTube video below) - two days before his 20th birthday.

Redkirk Warrior, who won twice for William Haggas in England before heading down under via a stint in Hong Kong, is now under the care of David Hayes, son Ben and Tom Dabernig at Lindsay Park Racing in Victoria, who collectively stand at #19 in the world trainers’ rankings. The gelding put up an impressive Racing Post Rating of 119 on Saturday, and the new A$10 million Everest supersprint at Randwick next month is likely to be on his agenda.

Lindsay Park were also responsible for the second Bayliss G2 win on Saturday, Catchy, who justified favouritism in the Danehill Stakes. David Hayes says he is keen for the Fastnet Rock filly, a G1-winning 2-year-old last season, to take on the colts in the $2 million Caulfield Guineas on the same day as The Everest (October 14).

Bayliss is the youngest of two sons of former Queensland jockey and trainer Jamie Bayliss, who moved his family to Victoria in 2010 to give the boys a better chance of making it in racing. (Brother Jake, 22, is also forging a good career in the saddle.)

Regan was tutored initially by the now retired trainer Peter (Black Caviar) Moody, before moving to the Hayes operation. “He is a class rider, a star of the future,” says David Hayes. 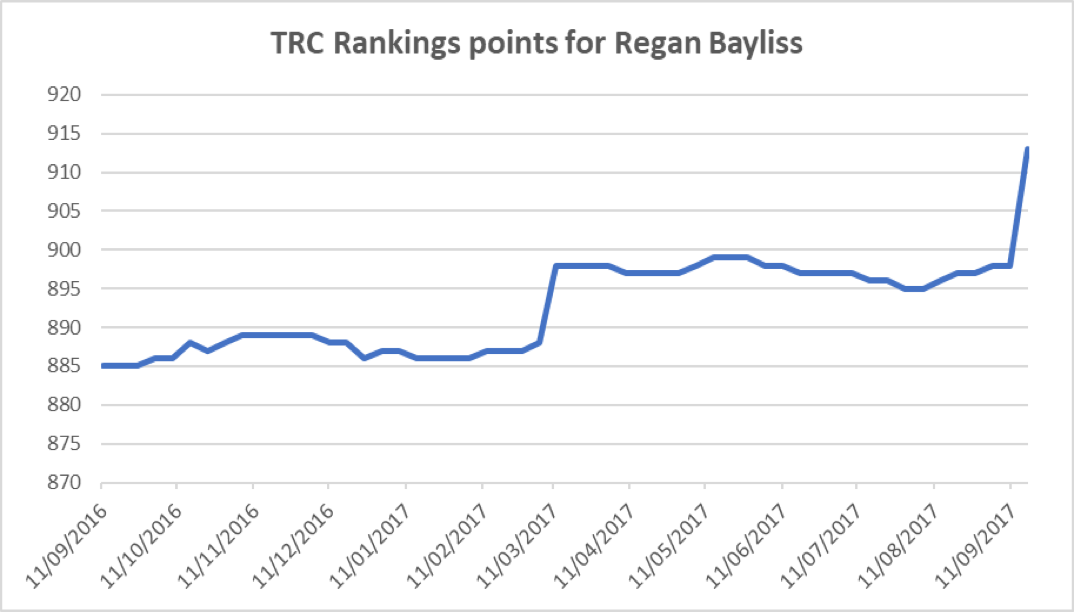 As you can see from the graph of his TRC ranking points trajectory over the past 12 months, 2017 has been a year of dramatic progression for him. And this does not include his victory aboard the former Ballydoyle inmate Annus Mirabilis in the famous two-mile $150,000-to-the-winner Adelaide Cup on his birthday, two days after that first G1 victory on Redkirk Warrior.

Nor does it include any of the five winners from seven rides he rode on one day at Geelong in May.

Three days afterwards, Bayliss suffered a broken wrist in a fall at the same track, and was sidelined for six weeks. That has proved to be a mere blip in a career that is continually gathering pace.