Less than five years ago her career looked to be over. The then 17-year-old Katelyn Mallyon had already stamped herself as a potential star by becoming the first female champion apprentice in Victoria when disaster struck. She suffered a fractured spine in a fall at Flemington that put her in a coma for four days and threatened to leave her paralysed.

She was out of action for nine long months, but Mallyon, the granddaughter of three-time Caulfield Cup-winning jockey Mick Mallyon, returned to be as good as ever - and won that same apprentice title again in 2013-14.

Now she’s well and truly mixing it with the best. Last Saturday’s Schweppes Rubiton Stakes at Caulfield is the latest example of her increasing standing as a rider. She partnered the 4-year-old Written Tycoon filly Super Cash to a 17-1 success in the Group 2, with top sprinter Chautauqua back in third. 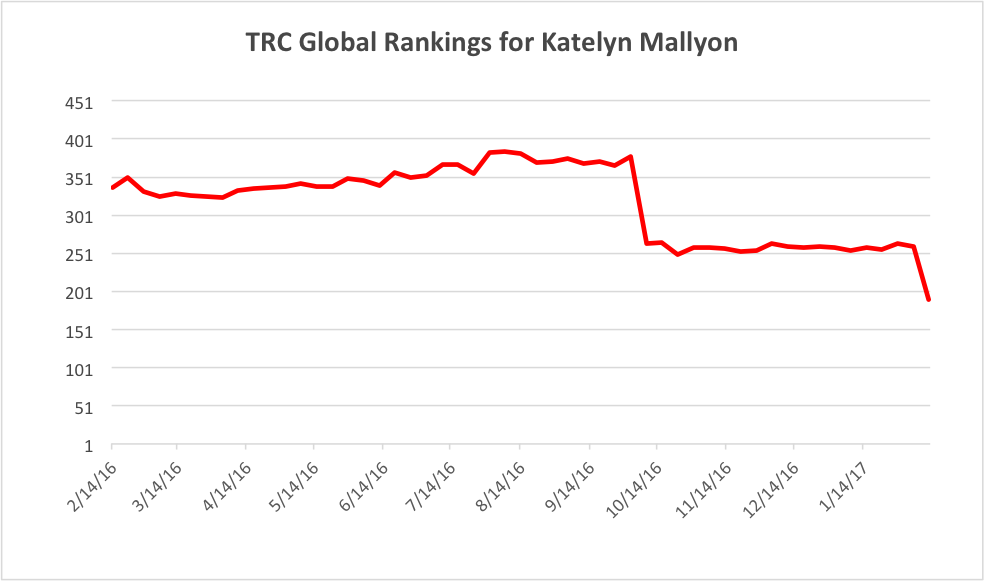 That win helped catapult the now 22-year-old up 70 places to 190 in the world jockeys’ rankings after an eight-point week-on-week gain. Check out her progress in the standings in the graph here.

It is the second year running Mallyon has won the Rubiton: last year she rode another filly, Heatherly, to victory for trainers Mathew Ellerton and Simon Zahra.

They and Super Cash’s trainer, Andrew Noblet, are among a growing number of top Aussie conditioners to recognise Mallyon’s abilities. Robert Hickmott is another - she rode the gelding Assign for him in last November’s Melbourne Cup, having already won a G2 on him at Caulfield a month earlier.

And the Gai Waterhouse/Adrian Bott team is also a supporter. She rode Northwest Passage to a listed victory for them at Moonee Valley on Friday and partnered two more for them at Flemington yesterday.

“Katelyn does a lot of work for us and obviously she’s a very talented rider, a good positive rider and a good front-running jockey,” Bott told racing.com.

Mallyon is still just 22. We’re going to hear a lot more of her in the future.