Godolphin received a timely boost ahead of what is arguably their most important week of the year with a landmark success on Sunday. The victory of the 5-year-old Fine Needle in the six-furlong Takamatsunomiya Kinen at Chukyo racecourse was their first G1 triumph in Japan.

It was only last week, mind you, that horses racing there under Sheikh Mohammed’s name were officially switched to Godolphin ownership, but this is the first Japanese G1 win for the string under any name in the timespan of the data used to power the TRC Global Rankings, which goes back to 2011.

Fittingly, the most notable achievement in Japan for Sheikh Mohammed’s empire so far was the triumph by Fine Needle’s sire, Admire Moon, in the 2007 Japan Cup, when he competed under the ownership of Darley Japan.

Sunday’s Chukyo race was actually the 500th Group or Graded win worldwide for Godolphin during that seven-year period of our data, and is sure to put the team in good heart ahead of Saturday’s eight-race Dubai World Cup card.

TRC has already had occasion to highlight the fine recent form of the operation’s runners, particularly those of British trainer Charlie Appleby. And, with U.S.-trained Avery Island and Enticed and Appleby’s Gold Town (who runs at Meydan on Saturday) looking sound prospects at present, Godolphin have good reason to look forward to the Kentucky Derby.

All in all, Godolphin are scheduled to have no fewer than 19 starters at Saturday’s multi-million-dollar Meydan spectacular - and that’s in just seven of the events, as they are not represented in the Golden Shaheen.

They have horses that are either favourite or disputing favouritism in five of the races:

And there are solid grounds for optimism on behalf of both Talismanic and Thunder Snow in the Dubai World Cup itself.

So the chances are indeed strong that Godolphin will extend an unsurprising, yet striking, domination of World Cup night statistics. Since the start of the TRC data, they have owned 11 winners, which is as many as the next four owners put together, as shown in the table below of all owners with more than one victory. Note that only six have managed two or more scores, and all of them are in the top ten in the TRC Global Owners’ Rankings).

WINNERS ON WORLD CUP NIGHT SINCE 2011

The story’s similar among trainers. Godolphin’s longtime main conditioner, Saeed Bin Suroor, is out on his own with eight World Cup winners since 2011. 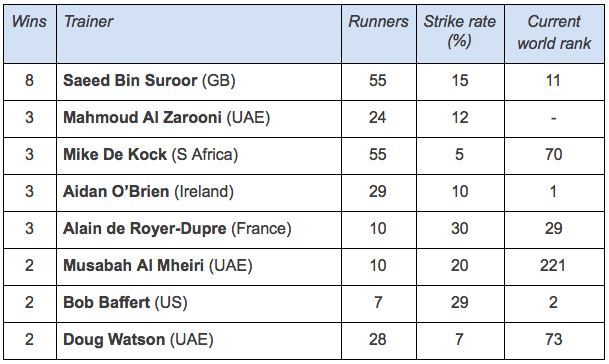 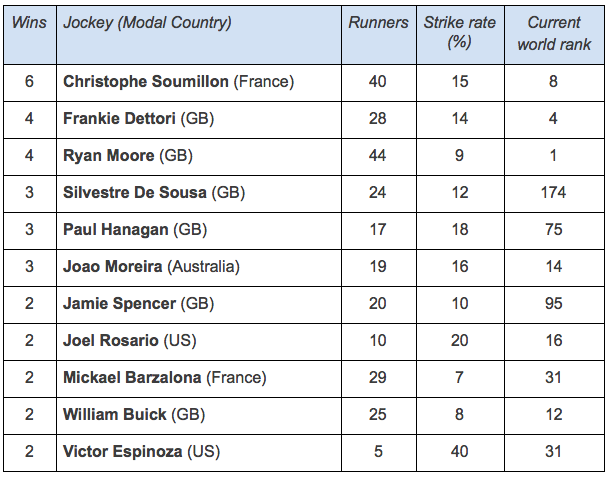 Among stallions, just four have sired more than one winner - Halling (4), Deep Impact (3) and Manduro (2) on turf and Dubawi (2) on dirt.

Bin Suroor of course is also responsible for the lion’s share of Godolphin’s last 500 Group or Graded wins. The table below shows all trainers who have contributed at least ten of those 500. Notably three of the nine in the chart train in Australia, where Godolphin have had more Group/Graded runners than in any other jurisdiction (hence the listing of Australia as their Modal Country in the TRC rankings).

The trainers who have contributed the most wins 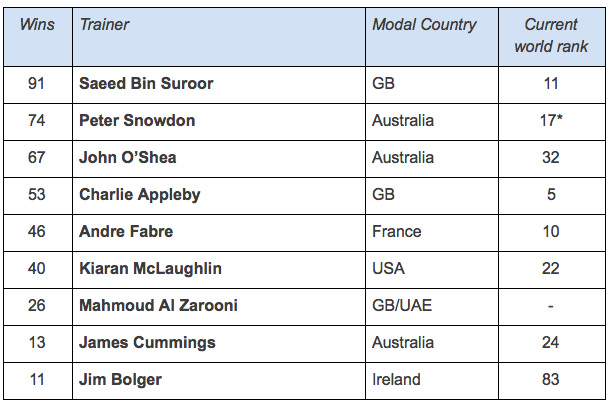 *Peter Snowdon is training in partnership with son Paul

Kerrin McEvoy tops the list of jockeys who have ridden more than ten of the Godolphin 500. He is one of three Aussies in the table.

The jockeys who have contributed the most wins 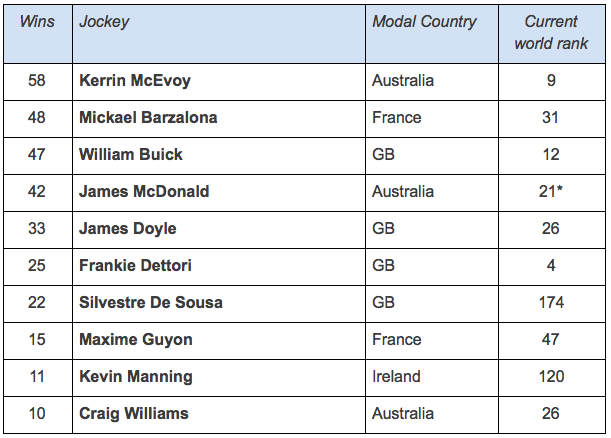