Four of the world’s four great racecourses - Santa Anita, Flemington, Randwick and Meydan - produced a feast of high-quality Group and Graded action across the world at the weekend, with starring roles for Kentucky Derby favourite Bolt D’Oro, ‘Big Cap’ winner Accelerate, Aussie sprinters Redkirk Warrior and Redzel and the emergence of some serious contenders for the riches on offer on the $30 million Dubai World Cup card in 16 days’ time.

And, with 35 Group and Graded races taking place last week - 14 of them in Australia, inevitably there were notable developments in the TRC Global Rankings.

It’s a while now since his appearances on California Chrome, American Pharoah and Dancing with the Stars, but former world top ten rider Victor Espinoza, who rode Accelerate, is heading in the right direction again - he is up eight places to #27. There was also more evidence of the merit of TRC Emerging Talents Drayden Van Dyke (up to #65 after winning Santa Anita’s G1 Triple Bend Stakes on City Of Light) and Regan Bayliss (up to #81 thanks largely to Redkirk Warrior’s second successive G1 Newmarket Handicap at Flemington). And trainer Satish Seemar, who had a super Super Saturday at Meydan, topped the lot, shooting up from #409 to #192 after a huge 16-point gain week on week.

Pride of place, though, is reserved for 42-year-old Newmarket conditioner Charlie Appleby, whose horses have been thriving over the past few months, so much so that he is now the fourth highest-ranked trainer in the world.

The Godolphin man’s five runners on Meydan’s Super Saturday included G1 Jebel Hatta scorer Blair House, who upset hot favourite Benbatl in what is a key trial for the $6 million Dubai Turf, and G2 Dubai City of Gold 1-2 Hawkbill and Frontiersman. Hawkbill, a son of Kitten’s Joy, is now a strong contender for the $6 million Dubai Sheema Classic, where he could face a field including Cracksman, Cloth Of Stars, Rey De Oro and Satono Crown.

Appleby - seemingly entrusted with better stock than Saeed bin Suroor by Godolphin’s former supremo, John Ferguson - has been thriving for some time (remember, for instance, his Breeders’ Cup Filly & Mare Turf triumph at Del Mar with Wuheida). Since September 1, in fact, he has a hugely better strike rate in global Group or Graded races than any other leading trainer. Check out this table of all practitioners with ten or more Group or Graded winners in this timeframe, listed with their current TRC Global Ranking and the one they had at the start of the period. 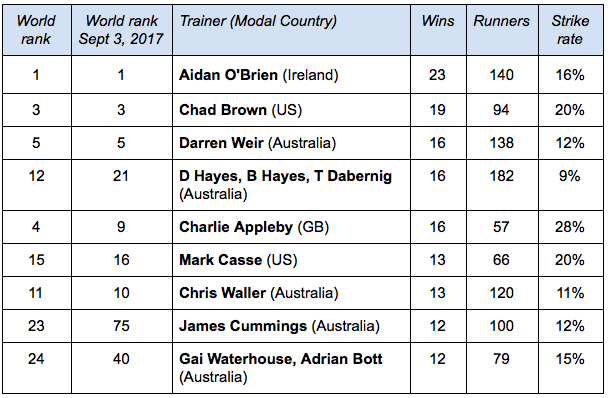 Note that only seven of Appleby’s 16 winners have come on Godolphin home soil. He is still nine from 36 (25 percent) elsewhere since the start of September.

Meanwhile the TRC algorithm has been seriously impressed by new Australian supremo James Cummings over this period (note his astonishing rise to #23 in the trainers’ standings) because his results have departed more from previous expectations. By contrast, Aidan O'Brien, Chad Brown, Darren Weir, Mark Casse and Chris Waller have performed almost exactly as predicted.

Super Saturday was average at best for Bin Suroor, who is normally the trainer to watch at the big Meydan race days at this time of year. The four-time British champion trainer, who has spoken of his dissatisfaction with previous Godolphin arrangements, remains world-ranked ten, but he will not have been happy that his two hot favourites for Saturday’s Meydan G1s were both beaten - Benbatl by Appleby’s Blair House in the Jebel Hatta and Thunder Snow by Seemar’s North America in the World Cup trial, the Al Maktoum Challenge R3.

North America, a 6-year-old Dubawi gelding, is owned by the controversial Chechen leader Ramzan Kadyrov (who is world-ranked 279 in the owners’ standings). Both he and Thunder Snow are best-priced 16/1 with British bookmakers for the World Cup in a market headed by West Coast (3/1), Forever Unbridled and Talismanic (both 8/1).

Other headline movements in this week’s updated rankings