Churchill Downs welcomed back the Breeders’ Cup World Championships this past weekend for the first time since 2011, and it was certainly a spectacular two days, featuring some magnificent performances, and more European runners than have run since 2009. Here are five talking points worthy of consideration after the events of the weekend:

Churchill Downs has consistently been the highest-handling location for the BC two-day event. The West Coast venues Santa Anita and Del Mar have two built-in advantages in generating handle: the weather (although the Europeans generally prefer the cooler weather and a little more give in the turf course) and the three-hour time difference. On Saturday, there were nine BC races with the post time of the first race at noon Kentucky time, which is 9 a.m. on the West Coast.

This year there was a statistical anomaly that may have suppressed wagering particularly on exotic bets. Here is a chart that displays the choice in the wagering and the odds for the winning horse of each BC race. 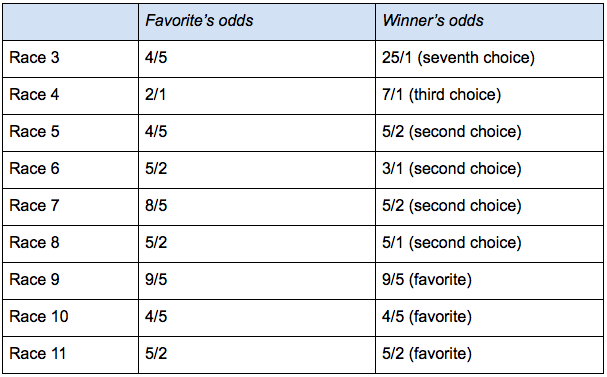 These are truly remarkable wagering results: the first or second choice won 11 of the 14 Breeders’ Cup races at Churchill. Without having the opportunity to study the exotic wagering pools, I would suggest that the astute, bigger bettors did not have to spread as deeply in the many multiple race wagers, thus suppressing total handle for the two days.

2. This was a really newsworthy Bulletin

The $1 million BC Juvenile Turf Sprint was a new addition to the racing menu, and hence there was no Graded status for the race.

The winner was Bulletin, owned by WinStar Farm, China Horse Club and SF Racing, trained by Todd Pletcher and ridden by Javier Castellano. This horse caught my attention for a few reasons.

First, Pletcher has consistently been the leading winner of 2yo races at Saratoga Race Course for the past decade. The Saratoga meet ends on the first Saturday of September, but the training track remains open through early November. This colt showed five works dating back to early September at Palm Beach Downs and debuted in the Hollywood Beach Stakes on September 29 at Gulfstream, wiring the field by seven lengths. After the race, WinStar president Elliot Walden said, “Todd felt like the horse needed to go to Florida. The horse put on a show down there and has since has trained exceptionally.”

When asked by Nicole Russo, of Daily Racing Form, what might be next for the colt, Walden suggested Bulletin might be considered for an appearance at Royal Ascot next June.

3. For the record, this filly was so impressive

One of the most impressive races of the weekend came in the next race, the BC Juvenile Turf, a G1 at a mile with a $1 million purse.

It had rained a great deal in Louisville on Wednesday and Thursday, and all the turf races for Friday were labeled ‘yielding’. Newspaperofrecord is an undefeated filly owned by Seth Klarman of Klaravich Stables, trained by Chad Brown and ridden by Irad Ortiz Jr.

Klaravich, the leading owner in wins at the 2018 Saratoga meeting, was 0-18 in BC races heading into the weekend. Not any longer.

Newspaperofrecord had broken her maiden at Saratoga and won the G2 Miss Grillo at Belmont by over six lengths, going away in both races. On Friday, Ortiz expertly broke on top, moved the filly to the front and raced far out from the rail, where the rain-heavy grass course appeared to be drying out. Sent off at 3/5, which was the shortest price in all 14 BC races, Newspaperofrecord was never challenged and won by a widening six lengths. It was one of the most impressive performances of the weekend.

There were two different owner groups who each won two races - and the difference between the two is one of the great things about Thoroughbred racing.

At Del Mar last year, Peter Miller and owners Rockingham Ranch and David Bernsen accomplished a remarkable feat when Roy H, ridden by Kent Desormeaux, won the BC Sprint at 9/2 and Stormy Liberal, ridden by Joel Rosario, won the Turf Sprint at 30/1. At that time, the trainer and his owners were as excited as any winners I had ever seen (and I have seen a lot). This was especially true as they race almost exclusively in Southern California and were the home team!

However, this year, when Roy H again won the Sprint, ridden by Paco Lopez, at 5/2 and Stormy Liberal, ridden by TRC Emerging Talent Drayden Van Dyke, won the BC Turf Sprint at 7/1, these gentlemen had accomplished something that had never been done in Breeders’ Cup history. Miller, Rockingham Ranch and David Bensen became the first participants to win two BC races in back-to-back years with the same horses.

I do not know quite what to compare it to, but Woody Stephens winning five Belmont Stakes in a row could certainly be considered apt. And they did it without the home court advantage. Congratulations gentlemen.

The other winner of two BC races this weekend was Prince Khalid Abdullah’s Juddmonte Farms, who have substantial Thoroughbred racing and breeding operations in the UK, Ireland and the U.S. To date, Juddmonte have bred 106 winners of 206 G1 races.

Their first runner at Churchill Downs on Saturday was Expert Eye, a Juddmonte 3yo homebred with two G3 wins this year. He was rounding into form when running a very close third at ParisLongchamp in the G1 Prix du Moulin in his last start. Expert Eye is trained by Sir Michael Stoute and was ridden by Frankie Dettori.

Dettori was slowly away and only had three of the 14 horses behind him after the first quarter. With exquisite timing and finesse, he got up in the shadow of the wire for the win.

The second Juddmonte runner was the most accomplished horse to run in the 2018 Breeders’ Cup, Enable, a 4yo filly trained by John Gosden.

Her recent and second win of the Prix de l’Arc de Triomphe in early October is well known. However, less well known is that the Arc was only the second race of 2018 for Enable, due to a training setback in late spring. Her only prep race for the Arc was a G3 over a mile and a half on the synthetic surface at Kempton Park, which she won by 3½ lengths.

There was an interesting backstory to Enable’s run in the BC Turf. Two weeks before, Gosden had four of the favorites in the five races at Qipco British Champion Day at Ascot. He won with three of them. The losing favorite was the 3yo filly Lah Ti Dar in the British Champions Fillies & Mares Stakes at a mile and a half. The 3yo filly who won that race was Magical, owned by Coolmore, trained by Aidan O’Brien and ridden by Ryan Moore. In the Breeders’ Cup Turf, Enable and a Coolmore filly were nine lengths clear of the rest as they dueled to the wire, with Enable winning by threequarters of a length.

That Coolmore filly was none other than Magical. A touch of revenge for Gosden!

5. So who should be Horse of the Year?

Finally, we come to the Classic, which was won by Accelerate, ridden by Joel Rosario, trained by John Sadler (who was 0-43 in Breeders’ Cup races going into the race) and owned by Hronis Racing. Accelerate went off as the 5/2 favorite but Rosario quickly moved him through horses, keeping him clear on the outside, and held off the closers to win by a length from Gunnevera and Thunder Snow.

Bob Ehalt, here at TRC, has two columns one written before the BC Classic and one written after the race regarding Justify and the Eclipse Award for Horse of the Year. I encourage you to read them both.

I wrote here after the Travers Stakes in late August that perhaps the winner, Catholic Boy, or another deserving horse might enter the discussion for Horse of the Year. Well, Catholic Boy ran himself out of consideration with a stinker in the Classic, but Accelerate is now a BC Classic winner and five-time G1 winner.

Since my last column on this topic, no horse that Justify beat has done anything to support his Horse of the Year credentials. Look no further than the Breeders’ Cup Mile and the Classic. Bravazo, a half-length behind Justify in the Preakness, was third in the BC Mile, beaten 5¼ lengths. In the Classic, Mendelssohn dead last in the Kentucky Derby, ran fifth, beaten four lengths. And consider McKinzie, who was Baffert’s Derby horse before getting injured. He ran 12th of 14 on the BC Classic.

As I said in closing my previous column: “A four-month racing career can certainly win a Triple Crown, but a longer, more productive career may be better for the industry as a whole and perhaps more deserving when it comes to handing out Eclipse Awards.”