The weight of expectation surrounding him has been immense ever since he made his debut in the breeding shed, so there will have been a great many very happy people on Sunday when a young filly called Lucky Lilac became the first G1 winner for the mighty Orfevre.

Her victory in the one-mile Hanshin Juvenile Fillies - the same race that gave Frankel his first G1 win as a sire when Soul Stirring took it last year - made the former Japanese Horse of the Year, Triple Crown winner, dual Arc runner-up and dual Arima Kinen hero just the third first-crop sire to win a G1 in the whole of 2017. Which augurs particularly well for his chances of becoming as important a stallion as he was a racehorse, and perhaps ultimately succeeding Deep Impact as Japan’s outstanding sire.

Orfevre, who stands third on the world all-time money list (behind Arrogate and Gentildonna), was not overly precocious as a juvenile, winning one of three starts, but those at Shadai Stallion Station, where he stands, fully expect that his foals will improve with age, just like he did.

As Shadai’s Naohiro Hosoda told Amanda Duckworth in this TRC article in October: “Some of his 2-year-olds have started running well, but we think his foals are not precocious. Instead, they will grow up gradually to aim at the classic races. That’s typical of Stay Golds, Orfevre’s sire, to be better at three and older.”

It’s only a start, but the win shot Orfevre 107 places up the world sires’ rankings to #247 with a six-point gain week on week. He has been represented just five times in Graded races so far - including by two runners in Sunday’s event (his Rock This Town, already a G3 winner, started favourite but finished a disappointing ninth of 18). As you might expect for one of the most celebrated horses ever to run in Japan, Orfevre has proved popular at stud - he covered 191 mares this year.

The other two first-crop stallions to register G1 wins in 2017 are the now South African-based Twice Over, who won four G1s in Britain for Juddmonte, and Saratoga G1 winner Poseidon’s Warrior, who stands at Pleasant Acres in Florida. Neither has yet to make a mark in the TRC Global Rankings.

Twice Over’s son Sand And Sea took the Tsogo Sun Gold Medallion over six furlongs at Scottsville, South Africa, in May, and Poseidon’s Warrior’s son Firenze Fire won the Champagne Stakes over a mile on dirt at Belmont Park in October. Twice Over stands at Klawervlei Stud in the Western Cape. 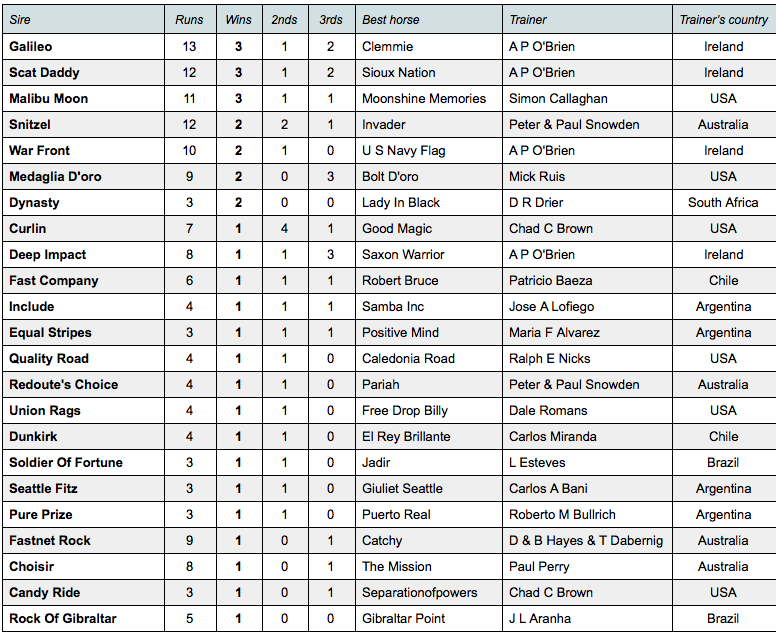 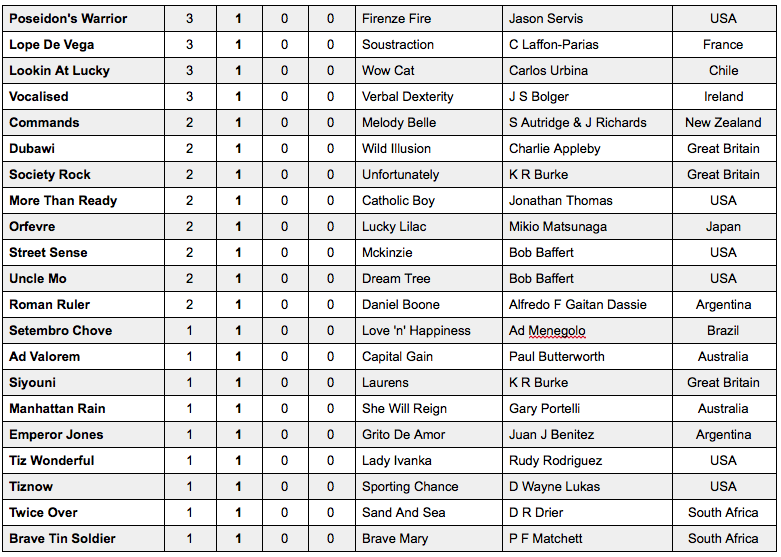 Fifty four juvenile G1s have been run worldwide through 2017, with 44 different stallions siring at least one winner each. In fact, as the table above shows, just seven have been responsible for more than one winner. Predictably world #1 Galileo is top of the pile with three winners, alongside #10 Scat Daddy and #26 Malibu Moon.