More often than not, Glorious Goodwood is an occasion of high achievement for Mark Johnston, and last week’s Qatar-sponsored festival was no exception.

Johnston, who is approaching the record number of winners by a British trainer, won the trainers’ title at the meeting for a 12th time, in the process gaining six points in the world trainers’ rankings, lifting him to #71 from #90.

Highpoint was the impressive G2 Vintage Stakes win of Dark Vision, and Johnston was also responsible for two Group-race runners-up.

TRC Global Rankings are based solely on Group and Graded results since 2011 and this is a high watermark for him rankings-wise, with 18 Group wins now in the current three-year window.

Dark Vision was ridden by British champion jockey Silvestre De Sousa, whose efforts last week resulted in a six-point gain. He is now world #99 (up from 118).

Stoute up to world #7

The 38 Group wins – including those at Goodwood, the G3 Bombay Sapphire Glorious Stakes and the G3 Bonhams Thoroughbred Stakes – authored by Sir Michael Stoute (+6pts, #7 from #9) is the most in a three-year window for the Newmarket trainer since our rankings began in 2014. As a result, he posts new highs for both ranking and ranking points.

Frankel proves his worth - again

Frankel (+4pts, #4 from #5) is living up to every ounce of promise his early TRC Global Rankings performance suggested. His nine runners last week finished 113445777, wins coming from Mirage Dancer in the G3 Glorious Stakes at Goodwood and Finche in the G3 Prix de Reux at Deauville.

Dark Angel shines at both of the big meets

Dark Angel (+6pts, #7 from #11) has formerly spent eight weeks at #6 and 13 weeks at #7. He now returns to the latter slot after two winners on either side of the Atlantic last Friday. First, Battaash won the G2 King George Qatar Stakes, then Raging Bull the G2 National Museum of Racing Hall of Fame at Saratoga. 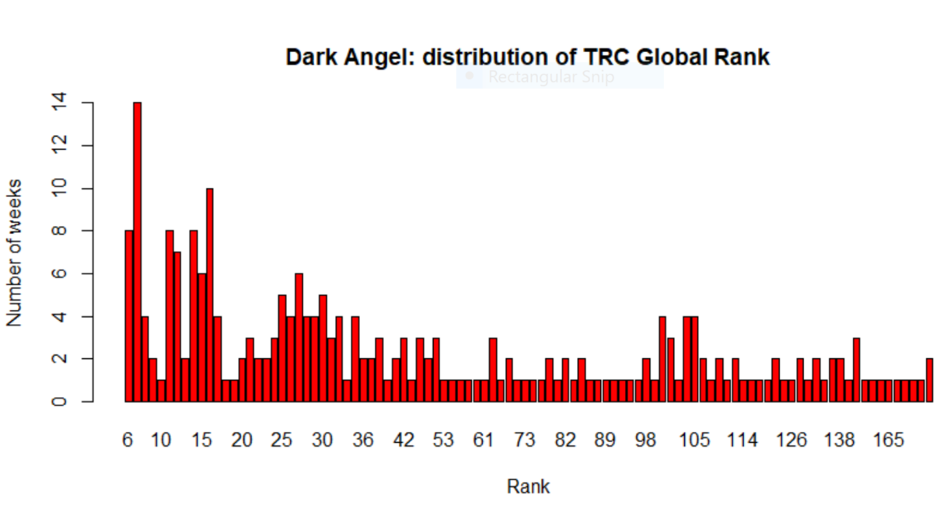 Nathaniel is no one-horse wonder

We reckon Newsells Park producer Nathaniel is mighty interesting. Already with one superstar in Arc winner Enable, he now has been represented by 23 different horses in Group races, going 10-58 (17 percent) between them. The latest scorer was G2 Lillie Langtry Stakes heroine Pilaster. The sire also had the fourth- and sixth-placed finishers in the 14f test.

It was a great week at Goodwood for owners Cheveley Park Stud (+8pts, #24 from #31) who we featured in this article last year. The red, white and blue livery of the Newmarket stud was carried by G2 Qatar Lillie Langtry Stakes winner Pilaster and G3 Bonhams Thoroughbred Stakes hero Regal Reality.