If stud managers swapped places with football managers, Cheveley Park’s Chris Richardson would be the first name linked with any new vacancy at the other top clubs. There cannot be a single dissenter to the notion that Richardson – who has held the position of managing director at Cheveley Park since 1987 – has done an outstanding job since taking the helm at the Newmarket nursery.

TRC Global Rankings do allow us to at least trace the trajectory of success and failure for any given operation, though it is naturally beyond their scope to explain its cause. We have published the rankings every week for over a year now, but they have been produced internally here at TRC since we first started doing the research in 2014.

Cheveley Park Stud’s ownership is only one part of their Thoroughbred operation, which includes standing stallions like Pivotal and boarding mares on over 1,000 acres of prime Newmarket stud land. The chart below shows that this arm of the operation has been consistently in the TRC Global Rankings Top 30 since 2014; the current ranking is #21.

The table shows that, in the last four years, Cheveley Park has never been ranked lower than #68 and never higher than #18. It achieved the latter as recently as this month.

The distribution is known as ‘bi-modal’ because it has two peaks of equal height (16 weeks): one over a ranking of #20, the other #35. It the distribution were to be smoothed out, the #35 peak would disappear into slots around it, much like a game of Tetris, but the bars around a ranking of #20 would be less affected. The graph would slope up slightly from #18 to #21 and slope down pretty much thereafter.

So, here is the same graph with a trend line added which describes the smoothed likelihood that Cheveley Park could be found in a given ranking slot, if a week were chosen at random from the rankings history. It can be seen that the highest likelihood is rank #20:

There’s something particularly interesting about the racing fortunes of the stud owned by David and Patricia Thompson right now. And it stems from this table of wins by broodmare sires in Britain and Ireland in 2017 (sourced from the Proform Professional database, via www.proformracing.com):

Cheveley Park staple Pivotal has gained more wins as a broodmare sire than any other in 2017. Given that many of these mares are in the ownership of Cheveley Park, this obviously implies that the stud are in a very strong position, for it is hard to think of a better marker of sustainable success for a breeding operation.

But it doesn’t stop there. Among other acquisitions Cheveley Park has made are the stallions Intello and, now, Ulysses – both sons of Galileo with more than average pace even for top-notch sons of the great sire.

To understand the potential significance of this, look at the following table of all runners on the Racing Post database by Galileo out of a Pivotal mare: 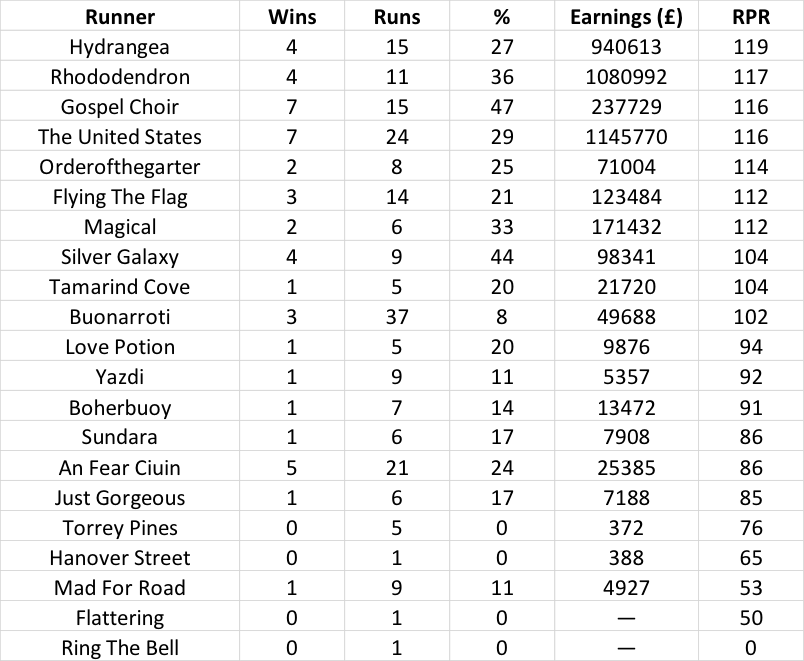 This is ridiculous. Even the runners rated sub-100 have gone 11-71. So, the bottom 50 percent of the sample collectively has a 15 percent strike-rate!

From a statistical standpoint, you simply must be long on Cheveley Park shifting those red bars in the graph to the left in the years to come – that is, improving their average ranking at any given point.

Richardson is a top-notch operator, but much like some football clubs always seem to make smart decisions and others invest in the wrong people, it is the Thompsons who built the place up and put their trust in the right man. (As an aside, what IS like football is that a former assistant of Richardson’s, Julian Dollar, was recruited by a newer operation - under its current ownership - of comparable ambition, Newsells Park Stud. You might have heard of them: they stand Enable’s sire Nathaniel.)

The true joy of Flat racing arguably isn’t just in the ephemeral pleasure of backing the next winner, but in following and anticipating the trends in the sport caused by the shift in the power structure of stallions.

Einstein famously said: “God doesn’t play dice” when referring to the idea that the basic ideas in physics should be deterministic and not probabilistic. In horse racing, we understand that randomness is inescapable, and controlling it no easy thing, so shaping the probabilities in your favour at the top table of bloodstock is a high-stakes game of incomplete information, like poker. And like poker, if you play enough hands it converges to a game of skill.