Two more Group winners for Frankel (he had seven runners this week, and three thirds as well) have catapulted the all-time great racehorse to world #4 stallion - up three places this week. This is unprecedented and - in rankings terms - exciting.

To the maths behind the rankings, Frankel is just a collection of 74 Group race results. It does not know that this scant sample has been achieved by one of the best racehorses in history and that he is being patronised by some of the best mares around, increasing his probability of long-term success.

But the maths can still identify Frankel is something special because – at this stage of his career – there hasn’t been a stallion like him.

A sample of 74 runners is a small one, and TRC Global Rankingsis mindful of the risk in these things. It seeks not to make a splash in, hurriedly jumping on one bandwagon or another, but to minimise errors in predicting the results of future Group and Graded races.

This is extremely important to note: if Frankel was placed any lower than #4, on the basis it is ‘too soon to tell’, reached either mathematically or otherwise, the probability of ranking one of his sons or daughters too low in a future Group race increases.

While it seems like 74 runners is not a lot, in terms of mitigating risk it is a lot more significant than 54 or 44 runners: we have reached the point where the maths is screaming "this is not a fluke".

To remind you what we have detailed before, Frankel's record of 19 Group winners from 74 global runners is represented by a strike rate of 25.7 percent. For comparison, Galileo's strike-rate is 17.1 percent and Dubawi's 17.6 percent.

Now, strike rate is nowhere near the most important consideration for TRC Global Rankings. The first and most important statistic for a stallion is simply the number of runners he has been represented by in Group and Graded races, for we are dealing here with the cream of the crop of all Thoroughbreds worldwide, and to even get a runner into a Group or Graded race is somewhat predictive of future success.

But let’s talk strike rate just for a second here, for it is a widely understood metric that isn’t that misleading applied in this spot.

As the sample size of a stallion grows, his strike rate becomes less noisy and approaches a stable number. One of the things TRC Global Rankings is doing is answering the question: “How is a stallion doing in terms of his win rate at this stage of his career? And how much trust do we place in him continuing to do it?”

Frankel's strike rate is only the 49th best among the 500 we consider the best in the world right now. The best belongs to Twice Over: 1-1 or 100%.

Of the 48 sires with a higher strike-rate than Frankel:

To see how difficult it is for a sire to maintain a high strike rate as the sample size increases, consider the following leaders bracketed by runners:

(Note here that strike-rate is tougher to achieve in big fields than small, and tougher to achieve against better runners than weaker groups. We allow for both in the TRC Rankings points that determine the ordering of the classifications.)

Separated out into groups like this, you can hopefully see a bit better how the rankings work.

Now, consider the following stallions who have had between 140 to 160 runners:

This is a good bunch of stallions, right? Their median ranking is 54.5. Now, when Frankel doubles his number of runners, he will have 148 - right in this group.

Yet, if this were to happen, Frankel’s strike-rate would be 12.8 percent, which would be still better than eight of the ten stallions above!

There is no need to go on, but we cannot resist a geeky exercise. What if we took 74 runners at random from the 1,651 that Frankel’s sire Galileo has had since 2011, and counted the number of Group winners in the sample? What percentage of 50,000 repetitions of this exercise would have 19 winners or more, like Frankel?

The result of the frequency simulation is shown in Table 1 (below). The red columns are those in which Galileo had 19 or more winners in a sample of 74 runners. 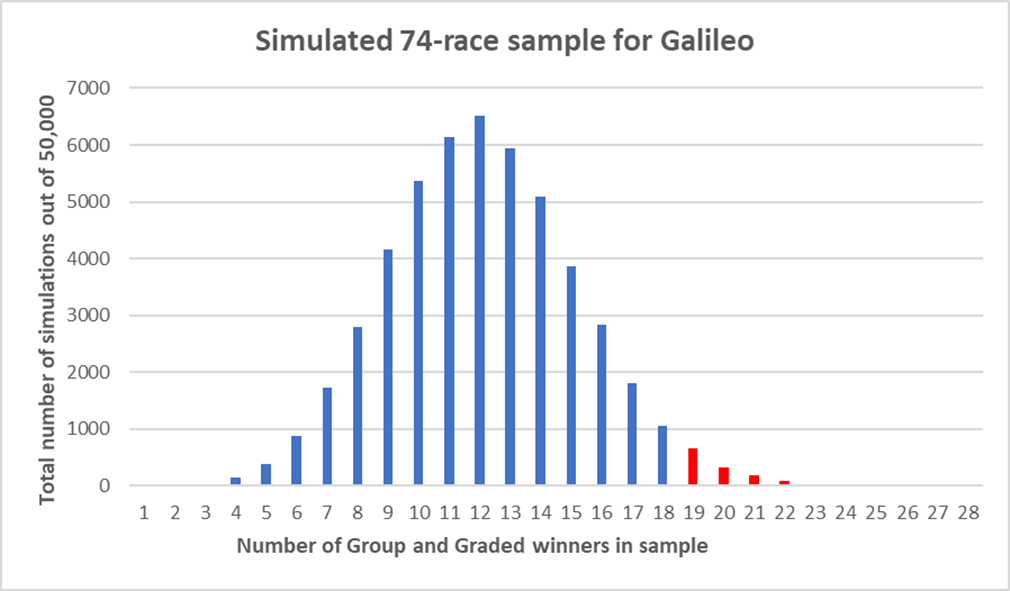 Of course, this could have been worked out algebraically from the binomial theorem. The probability that a stallion with Galileo’s strike-rate of 16.4 percent (since 2011) would have at least 19 winners from 74 runners is 2.694 percent, which is the equivalent of 1,374 of the samples (we got 1,284, so Galileo was a bit ‘unlucky’ in our simulation.)

Now, the fact that only 2.694 percent of all Galileo’s 74 race samples has the same number of winners as Frankel’s actual totals does NOT suggest that Frankel is 97 percent likely to be better than Galileo. The comparison is unfair on the Coolmore great because we haven’t accounted for either the risk that Frankel’s results are flattering to him or the fact that Galileo has achieved his results in better quality races on average.

That bloodstock history contains examples of stallions who have got off to a great start. For instance, in the rankings of July 17, 2016, Uncle Mo had scored with 13 (Frankel 19) of his first 74 Graded winners, which entitled him to being ranked #19 (Frankel #4), before later reaching as high as #5 at the peak of his success on April 9, 2017, but he has faded to world #22 in this week’s rankings.

Frankel is in a different league to Uncle Mo at the same stage: the Juddmonte great has faced stiffer competition (tRPR 87.11 to 85.43) and bigger fields (10.28 to 9.82) yet has a strike-rate nearly one and half times better.

The numbers are unequivocal about this. The ‘too soon to tell’ brigade are backing the wrong horse. You cannot fluke numbers like Frankel without being worthy of the hype.