Some superb performances around the world in the TRC Global Rankings week that ended on Sunday have helped decide who should win our Performers of the Week awards for jockey, trainer and owner.

It is only his ridiculously high standards that keep us from giving Ryan Moore (+5pts, stays #1) another gong, while others such as Jamie Spencer (+9pts, #91 from #112) could easily have been honoured also, but this week saw ZAC PURTON (+9pts, #4 from #7) reach his highest-ever placing after a string of performances in Hong Kong that can only be described as brilliant.

Purton's Sha Tin six-timer on Sunday was spearheaded by the G1 Champions & Chater Cup on Exultant and the G3 Sha Tin Vase on Little Giant, the first for trainer Tony Cruz and the second for David Hall. Purton was particularly good on the latter.

In 2019, Purton has now risen a total of six places after eight Group-race wins, five of which have come at G1 level. This table of aggregated wins for jockeys across the world in 2019 summarises this performance:

To repeat a mantra of TRC Global Rankings, the aggregate of success is often a misleading guide to the difficulty of its achievement. Although Kiwi ace James McDonald has also ridden superbly this term, his 15 wins have come in Australia, where there are many more Group races than in Hong Kong. Purton’s 8-18 Is every bit as good when placed in the proper context.

We have tracked the battle between Purton and Jo Moreira closely. A year ago, we ranked Purton #16 with Moreira #11. Slowly but surely, Purton has wrested dominance of Hong Kong racing away from his rival and now he sits ten spots higher. This has come, in part, thanks to Purton’s partnership with superstar miler Beauty Generation, but, as we have mentioned before, there is much more to his record than this, and anyone who doubts this rider’s status as a true global superstar must be very hard to satisfy.

Last time Purton won JOTW, we showed how he stands #1 on the planet in terms of head-to-head strike rate, a metric that is a key part of the TRC algorithm before other adjustments are made to place every rider in a neutral context. It’s worth reviewing those stellar numbers again.

This week’s rise means that Purton, who also won the Kranji Mile in Singapore at the weekend on Southern Legend, has displaced Hugh Bowman (+1, stays #6) as the world’s highest ranked Australian jockey.

A great week for Coolmore Partners (+4pts, stay #2) who cut the gap to 12pts behind Godolphin (two wins, no gain, stay #1) with three winners, notably Hemosa’s victory in the G1 Tattersalls Irish 1000 Guneas and Magical’s romp in the G1 Tattersalls Gold Cup, while it was great to see a G1 win for the Aga Khan with the seriously talented Siyarafina in the Prix Saint Alary at ParisLongchamp.

However, there is no hestitation in recognising a major contributor to South African racing in the shape of CHRIS VAN NIEKERK (+11pts, #80 from #254), who had a G1 double at Scottisville in 16-runner affairs for the Tsoso Sun Gold Medallion and the Tsogo Sun Sprint, both colts trained by Sean Tarry. Niekerk was the top-climbing owner of the week and deservedy so.

Businessman Niekerk has been involved in ownership for over 25 years and has had much success, notably consecutive victories in the Durban July Handicap – South Africa’s premier race – in 2012 and 2013 (he reached world #50 in the rankings of June 7, 2015). He also owned the top sprinting mare National Colour, a winner in Dubai and also second in  the 2008 G1 Nunthorpe Stakes at York.

Van Niekerk’s fourth win of the year even entitles him to a spot in the top 15 owners of 2019 ranked by number of Group and Graded wins:

It has proved tough for many a son to follow the exploits of a famous father, but CHARLES HILLS (+11pts, #52 from #72) is at least on the road to doing that. He earns the second-biggest rise of the week (new #40 South African Sean Tarry gained 16pts) after a notable double.

Hills – son of training legend Barry, who won the 1973 Arc with Rheingold – sent out Phoenix Of Spain to win the G1 Irish 2000 Guineas and brilliant sprinter Battaash (the best performance of the week according to Racing Post Ratings) to annex the G2 Temple Stakes at Haydock, both within half an hour last Saturday. In the process, Hills jumps back towards his previous best ranking of #26, earned three times between September 18 and October 2, 2016.

In reverse chronological order, a full list of 38 Group or Graded wins gained by Hills within the scope of TRC Global Rankings is listed underneath. These include wins in Britain, Ireland, France, Canada and the USA – a notable achievement by the trainer. 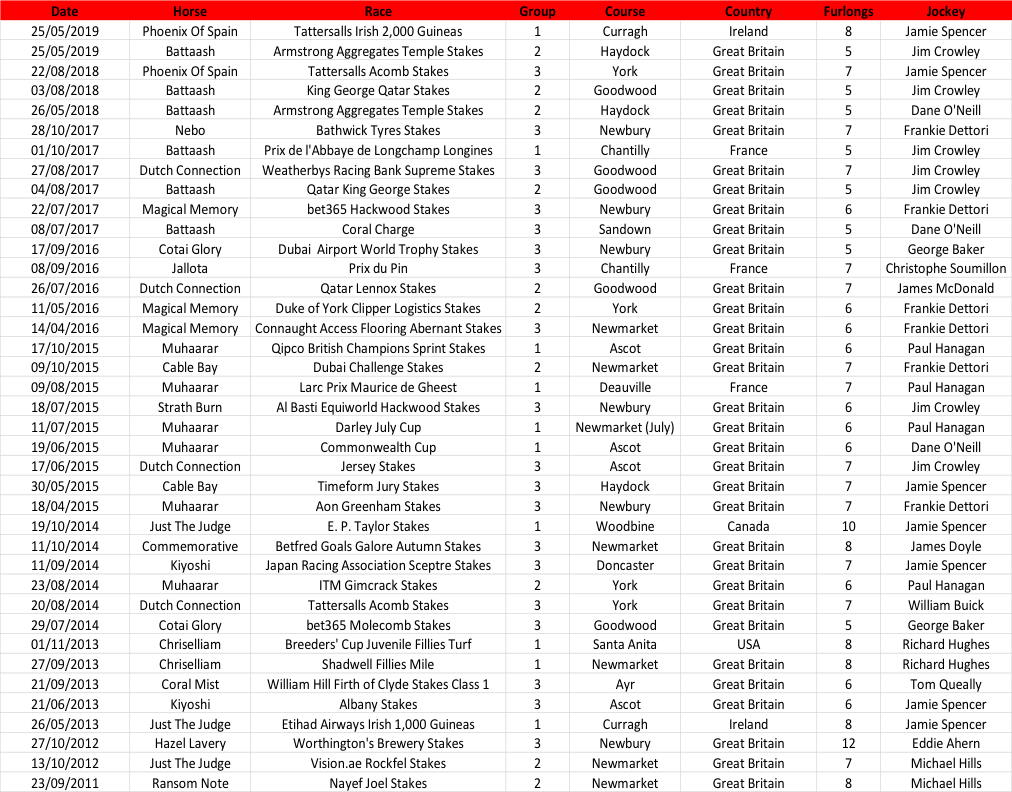