After four of his horses died at Santa Anita, Hall of Fame trainer Jerry Hollendorfer was banned from 11 tracks in five different states. Yet a five-year analysis of death records shows that Hollendorfer’s fatality rate is no higher than the industry average.

The Santa Anita scandal and its aftermath

In the six months after Christmas, track accidents killed 30 horses at Santa Anita Park — 13 in training and 17 in races. More than half the deaths occurred in the first two months.

Equally grisly streaks had occurred in 2014 and 2016 without much notice, but in 2019 Santa Anita came under a national spotlight after a Los Angeles Times story highlighted the deaths on February 23. The spotlight did not dim even after the track closed for three weeks and the fatality rate declined to a below-average level.

Santa Anita’s owners, the Stronach Group, responded with a number of measures, including a ban on Hollendorfer, whose horses accounted for four of the 30 fatalities — one in a race, and three in training.

In a June 22 announcement, the Stronach Group banned Hollendorfer not just from Santa Anita, but from all six of its Thoroughbred tracks, including Pimlico, Laurel, Gulfstream, Portland Meadows, and even Golden Gate Fields, Hollendorfer’s hometown track, where one of his horses had died training in January.

After the Stronach ban, the New York Racing Association (NYRA) announced Hollendorfer could continue to stable and race horses at its three tracks: Saratoga, Belmont, and Aqueduct. But NYRA came under pressure, and on June 29 it banned Hollendorfer as well.

On July 8, San Diego’s Del Mar race track also banned him, though he hadn’t had a horse die there in five years.

After Hollendorfer and the California Thoroughbred Trainers' organization complained that Del Mar had exccluded Hollendorfer “on an arbitrary or capricious basis, the San Diego District court struck down the ban on July 23, allowing Hollendorfer to return to Del Mar. On Friday (August 16) it was reported that he would return to tracks run by NYRA as well.

What’s all this back and forth about? Is Jerry Hollendorfer a dangerous trainer whose disregard for equine welfare has finally caught up with him? Or is he a “scapegoat” — as Los Alamitos management has suggested — an active but not exceptionally hazardous trainer, who just happened to have a bad run of luck when Santa Anita came under the spotlight, and is returning to favor as the spotlight fades? 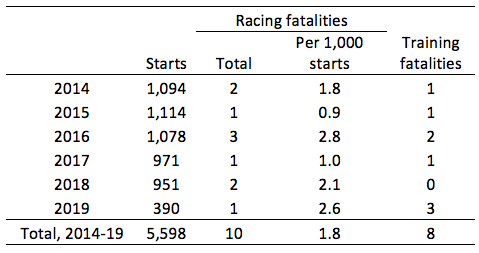 Sources. Deaths from HorseRacingWrongs.com, starts from Equibase.com. 2019 starts and deaths were counted through the end of Santa Anita’s meet on June 23.

When I refer to Hollendorfer’s death rate, I’m referring to the horses he’s had die in races. But one of the features of the 2019 scandal at Santa Anita was the attention the media paid to deaths in training. Were Hollendorfer’s training deaths exceptionally high?

Unless the data are missing something crucial, it seems Jerry Hollendorfer is not an exceptionally dangerous trainer. What landed Hollendorfer in hot water, then, is probably not what he’s done, but when and where he’s done it.

As one of the busiest trainers in California, Hollendorfer runs many of his races, and suffers nearly all his casualties, at Golden Gate Fields and Santa Anita. That’s entirely understandable, and it’s been true for years, but the environment at Santa Anita was different this year. Every Santa Anita fatality since Christmas of 2018 has become part of a larger story that generated negative press for the track.

Hollendorfer’s claimer Psychedelicat, who died after a race on December 30, was the first casualty of Santa Anita’s winter-spring meet. His horse Battle Of Midway, a Breeders’ Cup Mile champion, died February 23, and was one of three horses to die in an 18-hour period, triggering the first critical story in the LA Times.

Hollendorfer’s horses Kochees and American Currency died in May and June, when Santa Anita was under heavy pressure to take steps and try to put the crisis behind it. It didn’t help that his horse Defiantly had died training at Golden Gate Fields in January.

In a six-month period when Santa Anita suffered 30 fatalities, it’s not surprising that one of its most active trainers would be involved in four of them. That doesn’t necessarily mean he’s an unusually dangerous trainer. In fact, the data suggest he’s not.

A policy of banning trainers with high fatality rates might help to improve the sport. But it’s not clear what good will come of banning a trainer whose fatality rate is merely average. 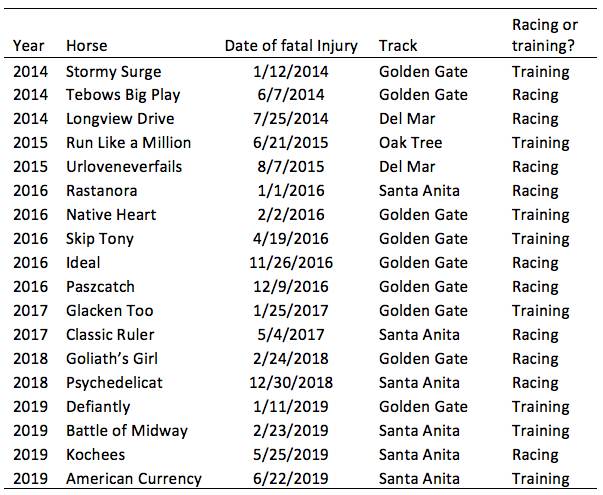 Sources. Dead horses’ names, dates, and tracks appear on HorseRacingWrongs.com. Looking up horses’ names on Equibase.com showed which ones were trained by Hollendorfer.

About the author
Paul von Hippel is associate professor of public policy, sociology, statistics and data science at the University of Texas, Austin. He tweets about horse racing at @equinometrics.

A note on sources
My data on equine fatalities comes from the nonprofit Horse Racing Wrong. In separate analyses, I've found that the data are practically complete for racing deaths, but probably undercount training deaths. If anyone knows of Hollendorfer horses who have died but are not named in this article, please let me know in the comments section below.