When the 2019 spring meet ended on Sunday at Santa Anita Park, track accidents had killed 30 horses since Christmas. The deaths at Santa Anita precipitated a national scandal that led the track to suspend racing for three weeks in March. California’s Governor and the California Horse Racing Board (CHRB) demanded an early end to the racing season in June, but Santa Anita’s management, the Stronach Group, refused.

The irony of the scandal is that this has actually been one of Santa Anita’s safer years. If you look at the 12 months from July through June — the period that CHRB uses for its annual summary of fatalities — Santa Anita’s total number of track deaths in 2018-19 was just one more than the previous year, and down 30 percent from the two years before that.

Santa Anita’s racing fatality rate, defined as racing deaths per thousand starts, was 2.2 in 2018-19 — down from 3.0 two years before. Though Santa Anita’s fatality rate remains above the national average of 1.7, it is below the rate for some other prominent racetracks, including Pimlico and Churchill Downs. 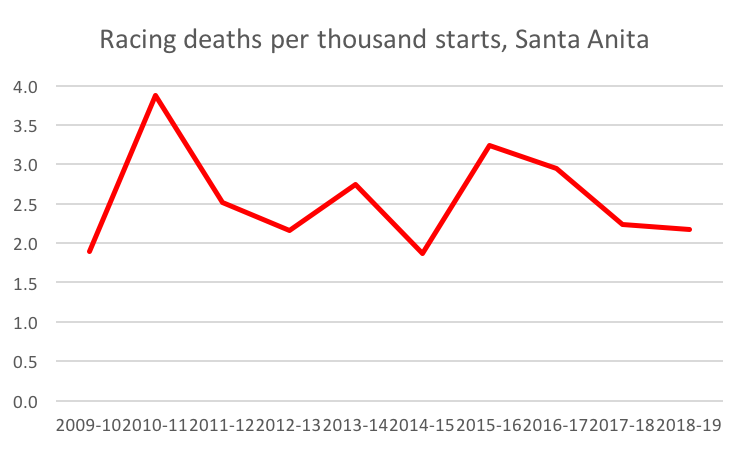 Timing and news coverage may explain how the scandal started, and why it has persisted.

As the graph below shows, Santa Anita had a relatively tranquil fall meet in September-November 2018. Although eight horses died in training, only one died racing, and nobody took much notice.

But the two months after Christmas were a disaster. Eighteen inches of rain fell, and 19 horses died, including three in an 18-hour period on February 22-23. On February 23, Los Angeles Times racing reporter John Cherwa wrote that the “recent spike in horse deaths at Santa Anita stirs concern”, and the story was picked up by national news outlets, including USA Today, NPR, NBC, CBS, and Fox News. 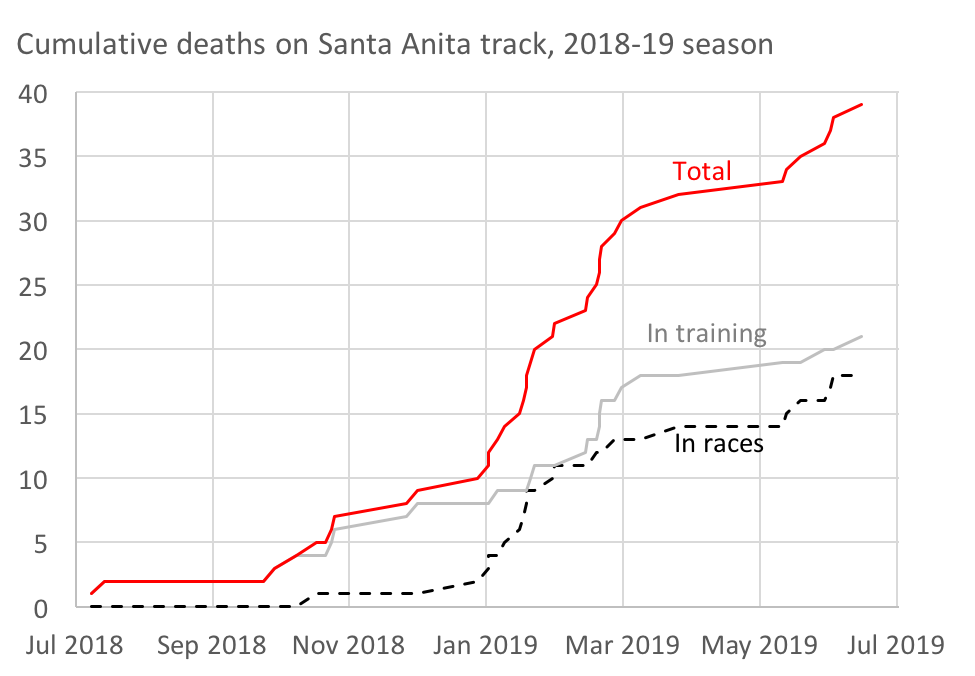 In response to the deaths and negative coverage, Santa Anita closed for three weeks in March. When it reopened, the death rate was much lower. Not a single horse broke down between April 1 and May 16. But the track got little credit, and, after the respite, each new fatality generated national media attention, especially in the LA Times and on CNN.

The media narrative had been set, and nothing was going to change it. Santa Anita had a problem.

The horses are vulnerable, and so is the industry

Of course, it doesn’t do any good to blame the media for magnifying the issue. Santa Anita really does have problems. Those problems aren’t new, and they’re not unique to Santa Anita, but the track, like many others, has not done everything it can to reduce equine fatalities. Reforms are overdue.

Some reforms that have been instituted during the scandal look like good ideas.

The state has finally banned pain medications in the day or two before a race — which should make it much harder to run injured horses who are vulnerable to breakdown. Of course, sportswriter Bill Nack and veterinary surgeon Greg Ferrarro called for this reform over 25 years ago, but I suppose late is better than never.

The Stronach Group has also purchased a $500,000 PET scanner that can check horses’ legs for hairline fractures — a valuable resource, though it is not yet clear when or how often it will be used.

So far neither Santa Anita nor the CHRB has spoken publicly about whether Santa Anita should replace its dirt track with a safer synthetic surface like the one that it used from 2007 to 2010. That conversation is overdue as well.

Reforms cannot be avoided. As the Santa Anita scandal shows, the industry is vulnerable to media campaigns. If reporters are willing to write about every horse that breaks down on the track — including undistinguished horses, in minor races, or on training runs — then scandals can persist indefinitely.

Every year nearly 500 horses break down in U.S. races, and a similar number break down in training. If the public stays interested, a breakdown story can be written every day. The industry can’t just wait for the issue to blow over.

The reason breakdown stories are so effective is that much of the public is naïve about the risks of horse racing. Serious racing fans know that one start in 500 ends in breakdown, but the average CNN reader has no idea.

Someone who watches only a couple of big races a year may never have seen a fatal accident. Even a casual fan who saw Barbaro break down at the 2006 Preakness Stakes, or Eight Belles euthanized at the 2008 Kentucky Derby, may imagine that such events are once-in-a-generation tragedies. The idea that they happen to lesser horses every day is hard to accept.

And the industry has no language that can make it acceptable.

Official statements on equine fatalities often begin with the assertion that “one death is too many”. And it’s impossible to get from that statement to the idea that some number of deaths is unavoidable, or a cost of doing business. All the industry can do is prove that it is taking every step to reduce the breakdown rate and make sure that every preventable injuries is, in fact, prevented.

The industry hasn’t done that yet. If the Santa Anita scandal forces the issue, then something good may come out of it.

Paul von Hippel is an Associate Professor at the LBJ School of Public Affairs, University of Texas, Austin. He tweets about horse racing at @equinometrics.

A note on sources: Annual reports of the CHRB provide fatality statistics for every year through 2017-18. The annual report for 2018-19 has not yet been published, but the date of every 2018-19 death at Santa Anita is published on the website HorseRacingWrongs.com. HorseRacing Wrongs campaigns for the abolition of horse racing, which may raise concerns about the impartiality of its data, but the data come from freedom of information requests to CHRB, and dates and counts were cross-checked against accounts in the Los Angeles Times.