The mighty Chris Waller is Australia’s #1 trainer no more. The Sydney-based conditioner, the country’s dominant trainer for more than six years, has been eclipsed - for the time being at least - by Darren Weir.

The Victorian took over the top spot in the world trainers’ rankings in 40 dramatic minutes at Caulfield in Melbourne on Saturday, winning both the C F Orr Stakes, Australia’s first G1 of 2017, and the next race, the G3 T S Carlyon Cup, helping him to a four-point gain in the standings.

New Zealander Waller, the man who trains Winx, was left unable to respond when Saturday’s big meeting at Randwick in Sydney, where his runners included the great mare herself, had to be put back two days because of extreme heat. That meant a one-point week-on-week loss for Waller.

The rescheduled Randwick card went ahead on Monday - too late to count towards the totals in the latest edition of TRC Global Rankings - but Waller is now three points behind the new Aussie #1, and Winx’s comfortable success in the G2 Apollo Stakes is unlikely to make up much ground when the next set of rankings appear this time next week. 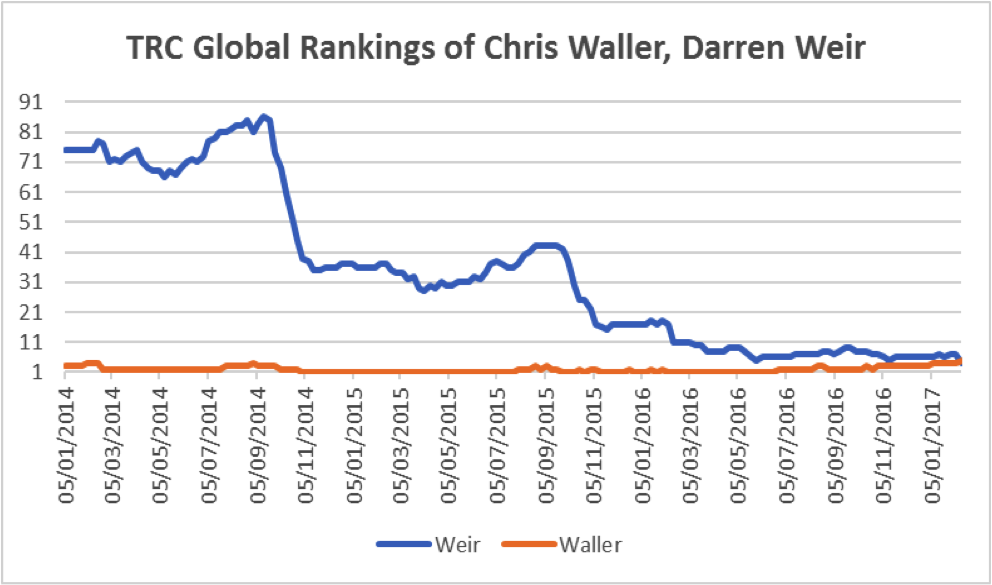 Weir, whose Prince Of Penzance won the 2015 Melbourne Cup with Michelle Payne aboard, has had a remarkable rise to the top, as told here by Steve Moran. Check out how he has closed in on Waller over the past three years in the graph of his trajectory in the TRC rankings. 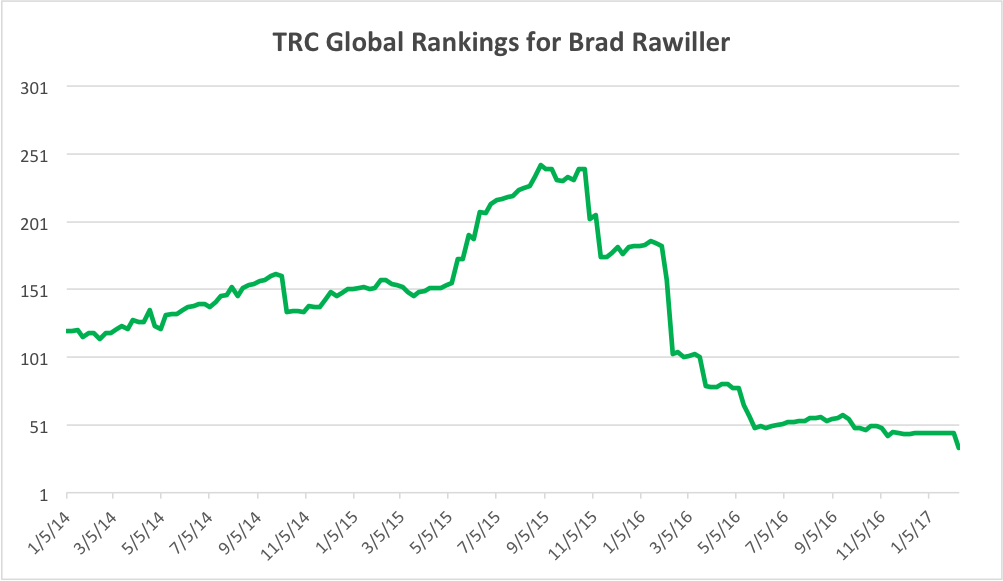 He shares the glory this week with Brad Rawiller, who rode both those Weir Caulfield winners, Black Heart Bart (C F Orr) and Burning Front. Rawiller climbs 11 places to #34 in the world jockeys’ rankings (and he is now eighth in the Australian list).

As the second graph shows, he has been enjoying a fine spell over the last 14 months. His ten-point week-on-week gain is joint highest this time with Brazil’s W S Cardoso (up from 250 to 174) and UAE-based Briton Richard Mullen.

Mullen climbs 119 places to 216 thanks in the main to Meydan G3 dirt winner North America, a five-year-old Dubawi gelding now being considered for the Dubai World Cup after his impressive seven-length success.

Also likely to appear on that World Cup card is Sheema Classic-bound  Satono Crown. The 5-year-old son of Marju, winner of the Hong Kong Vase in December, put up last week’s outstanding performance on Racing Post Ratings when he achieved a mark of 123 in winning the G2 Kyoto Kinen in Japan on Sunday. His victims included last year’s Japanese Derby winner and one-time Prix de l’Arc de Triomphe fancy Mahahiki, who finished third. 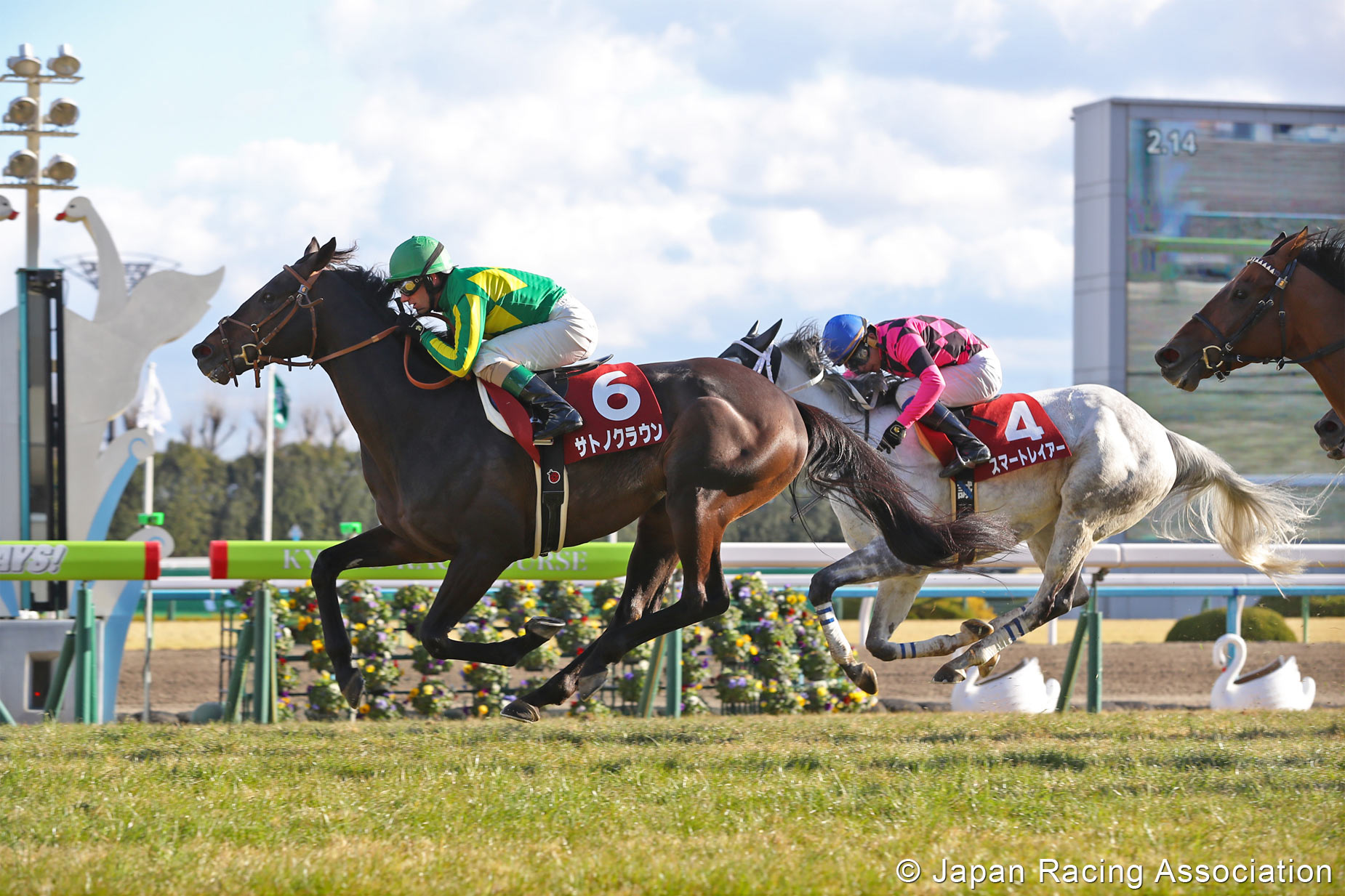 Satono Crown’s victory continued the rankings advance of his connections. Hajime Satomi is now joint seventh-ranked owner in the world (up from #8 after a five-point gain), Noriyuki Hori is joint tenth on the trainers’ list (up from #12 with a four-point gain) and Mirco Demuro gained three points to strengthen his hold on the sixth slot in the jockeys standings.