It has a prize fund almost on a par with that of the Epsom Derby the day before, a field that looks potentially very strong indeed, and for the first time in a decade it has a major sponsor that is likely to give its standing a huge shot in the arm after languishing for years as the poor relation of the glitzier classic to the north.

Sunday’s Prix du Jockey Club, which has the added bonus of being contested on one of the world’s most picturesque racecourses, may be a landmark edition of the historic race for another reason too - three generations of the famed Head family have already trained the winner: this weekend a fourth could join that remarkable roll of honor.

Of course, Carlos Laffon-Parias is not strictly a Head, but the former five-time Spanish champion amateur rider is married to Criquette Head-Maarek’s daughter, Patricia, so victory at Chantilly on Sunday for his Recoletos, currently second favourite, would put a big tick in that particular box. 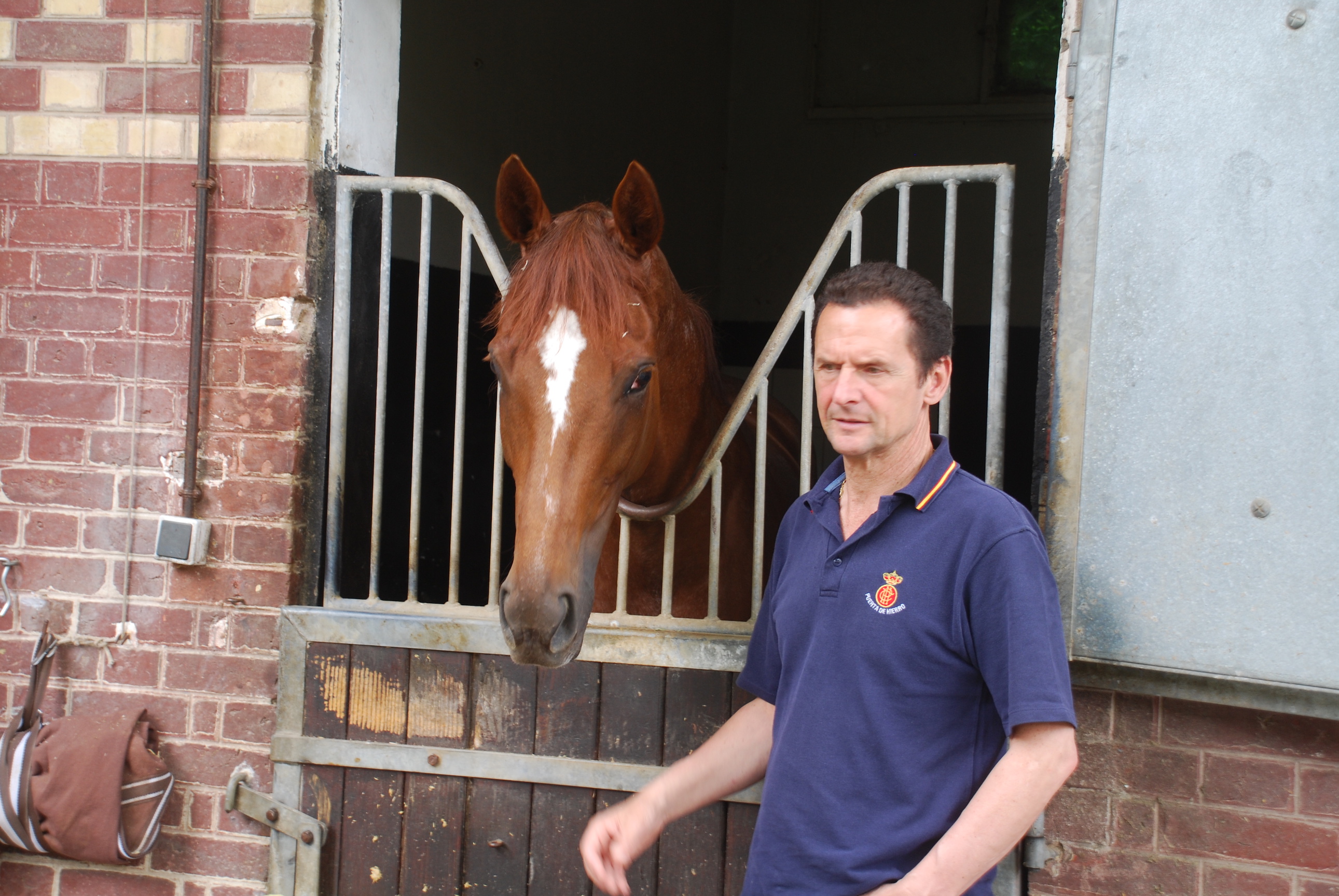 That same box has already been ticked for the greatest French race of them all, October’s Prix de l’Arc de Triomphe, thanks to the victory in 2012 of Solemia, who Laffon-Parias trained to a stunning 33-1 triumph.

Sunday will be the first time since 2007, when Lawman and Frankie Dettori triumphed, that France Galop has found a sponsor for a race, also known as the French Derby, that began life in 1836. The Qatari-based investment group Qipco have stepped in to take the country’s oldest classic under their arm, adding to a sponsorship portfolio that already includes British Champions Day and the Guineas weekend at Newmarket at the start of May.

Total prize money on offer for the Prix du Jockey Club is now €1.5 million, with €857,000 to the winning owner, which rises by another 64 percent if the horse is French bred.

The potential line-up is impressive. Indeed it may turn out that Qipco have been blessed with a vintage renewal for their Prix du Jockey Club debut.

Market leader at this sage is the Andre Fabre-trained and Qatari-owned (Al Shaqab Racing) Al Wukair (by Dream Ahead), who was a close third to Churchill after receiving little luck in running in the English 2,000 Guineas at Newmarket the start of May. Also likely runners are the French 2,000 Guineas winner, Brametot (a Rajsaman colt also owned by Al Shaqab), and the third, Rivet (Fastnet Rock).

Recoletos, a son of Whipper, became a leading contender when he brushed aside two Fabre runners - the Galileo colt Waldgeist and Akihiro, a son of Deep Impact - in the G2 Prix Greffulhe at Saint-Cloud over 2,000 metres on May 8. Ridden by Olivier Peslier, Recoletos took up the running in the straight and went on to record a comfortable victory in the manner of a top-class horse. It was his third win in as many outings this season.

Waldgeist, France’s top 2-year-old last year after winning the G1 Criterium de Saint Cloud in October, was having only his first run of the season, but the 2½-length gap to the winner could have been greater. Akihiro finished well to be a head back but still looks to have something to find.

It was a big step up in class for Recoletos from his previous easy win in a conditions race over 2,100m on the same track in April, though the G2 success over the better fancied Fabre pair was not such a surprise to his trainer.

“I always thought the horse had a lot of potential when he arrived as a 2-year-old last year,” said Laffon- Parias. “We considered Recoletos was up to the task of winning at this level after his last win, rather than just going for an easier option [in a] listed race, which he proved emphatically. Recoletos was fortunate to arrive in the summer after the virus that plagued the horses in my stable and many others in Chantilly last spring, and thankfully he avoided catching it.”

By contrast, star filly Left Hand, owned by the Wertheimer brothers, contracted the virus but, unlike others in the stable, recovered quicker and ended the season on a high note, winning the G1 Prix Vermeille.

“It was difficult to deal with the virus, and Left Hand was rested for a couple of months and then ran a blinder in the Prix de Diane, finishing second to La Cressonnière and later took the Vermeille in September. For other horses in the stable, it took a lot longer to get over the effects,” said Laffon-Parias.

Recoletos was not initially entered for the Jockey Club, and Laffon-Parias is to supplement the horse, which will cost his owners €72,000, just €2,100 less than the win prize money for the Prix Greffulhe, although, as the colt is French-bred and owned by the Spanish Hinojosa family, operating under the name of Darpart from a stud in Normandy, they would receive additional 64 percent owners’ and 14 percent breeders’ premiums on top of the win prize money.

Recoletos proved a bit of a handful when acting up in the parade ring before the Greffulhe. “The horse is still immature in nature and has a bit of a nervous character, even in the yard at times, though his work rider in the morning, Stephane Laurent, understands him very well and has been a great calming influence,” said Laffon-Parias. 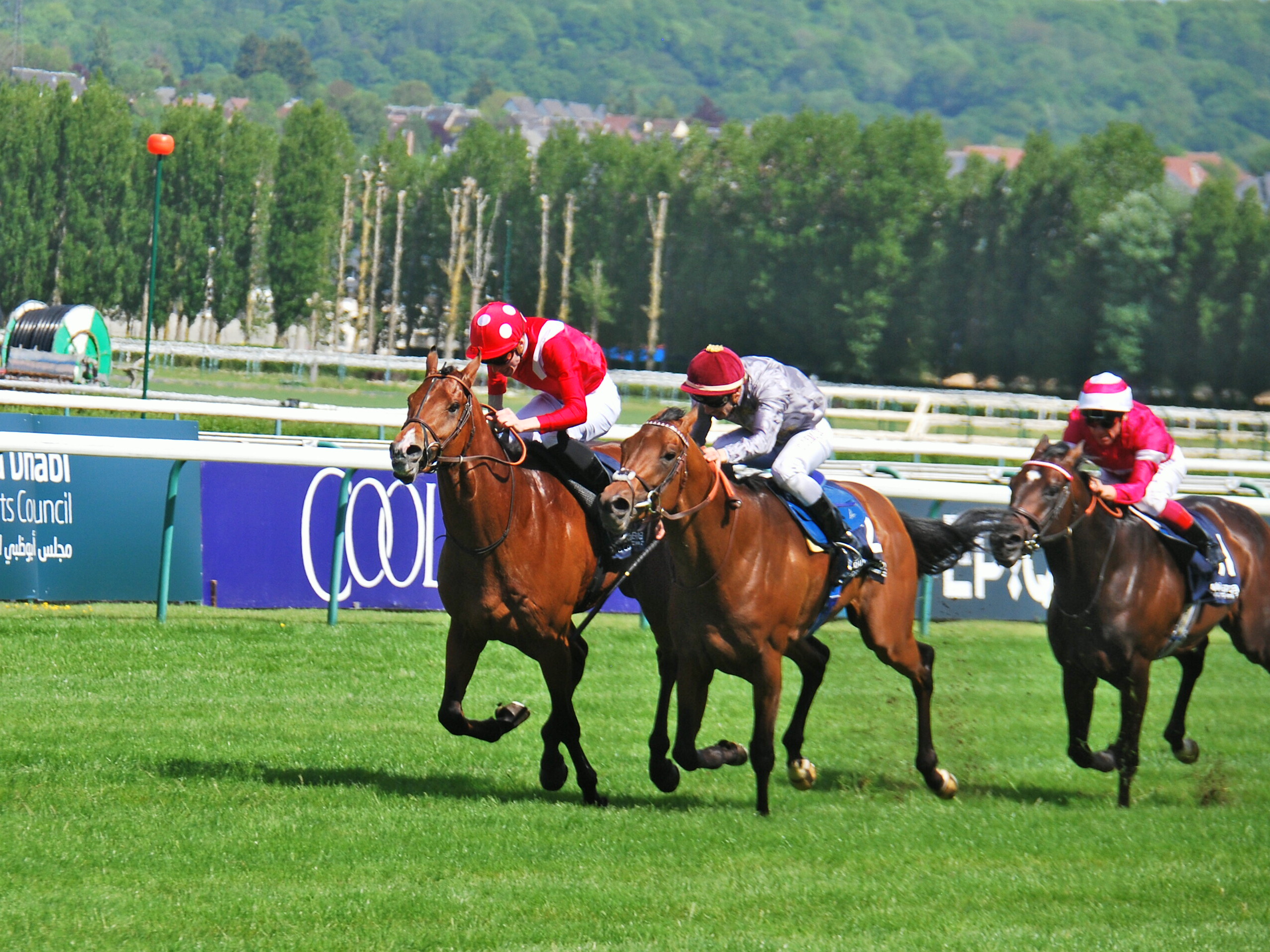 “The opposition for the Jockey Club looks tough, with Al Wukair a big danger on his Guineas form if staying the extra 500 metres, and likewise Brametot, the winner of the French equivalent [the Poule d’Essai des Poulains], and the third, Rivet, both among the entries. Brametot had a pretty hard race to get up in the last strides in very testing conditions.”

Rivet’s trainer, Newmarket-based William Haggas, said the French Derby was always a difficult race to win. “I don’t know if Rivet will stay 2,100 metres or can reverse the form with Brametot, but I am hopeful of a good run - as he is out of a Galileo mare - and we can only try.

“The horse has come out of the French Guineas - which was a particularly tough race - in good form, has been working well since and the expected better ground will be much more suitable.”

Some of the French winners of the Greffulhe in the past have run in the English Derby instead, like Pour Moi, successful at Epsom in 2011. Significantly, since the Jockey Club distance was shortened from 2005 by 300 metres to 2,100 metres, five winners have either finished first or second previously in the Poulains.

Also in the reckoning on Sunday is yet another Fabre colt, Soleil Marin. The Godolphin-owned son of Kendargent won his fourth consecutive race in the Prix Noailles at Chantilly (2,100m) in April, beating stablemate Akihiro, who was having his first run of the season, by a head. Akihiro, of course, subsequently ran third to Recoletos.

In another important trial, the Prix de Guiche over 1,800 metres at Chantilly, Phelps Win (Muhtathir), trained by Henri-Alex Pantall, recorded an emphatic three-length win on soft ground from Plumatic (Dubawi), another who is trained by Fabre. Conditions may not be the same in the Jockey Club, however, with a hot sunny week forecast up to the race. Like Recoletos, Phelps Win will need to be supplemented. 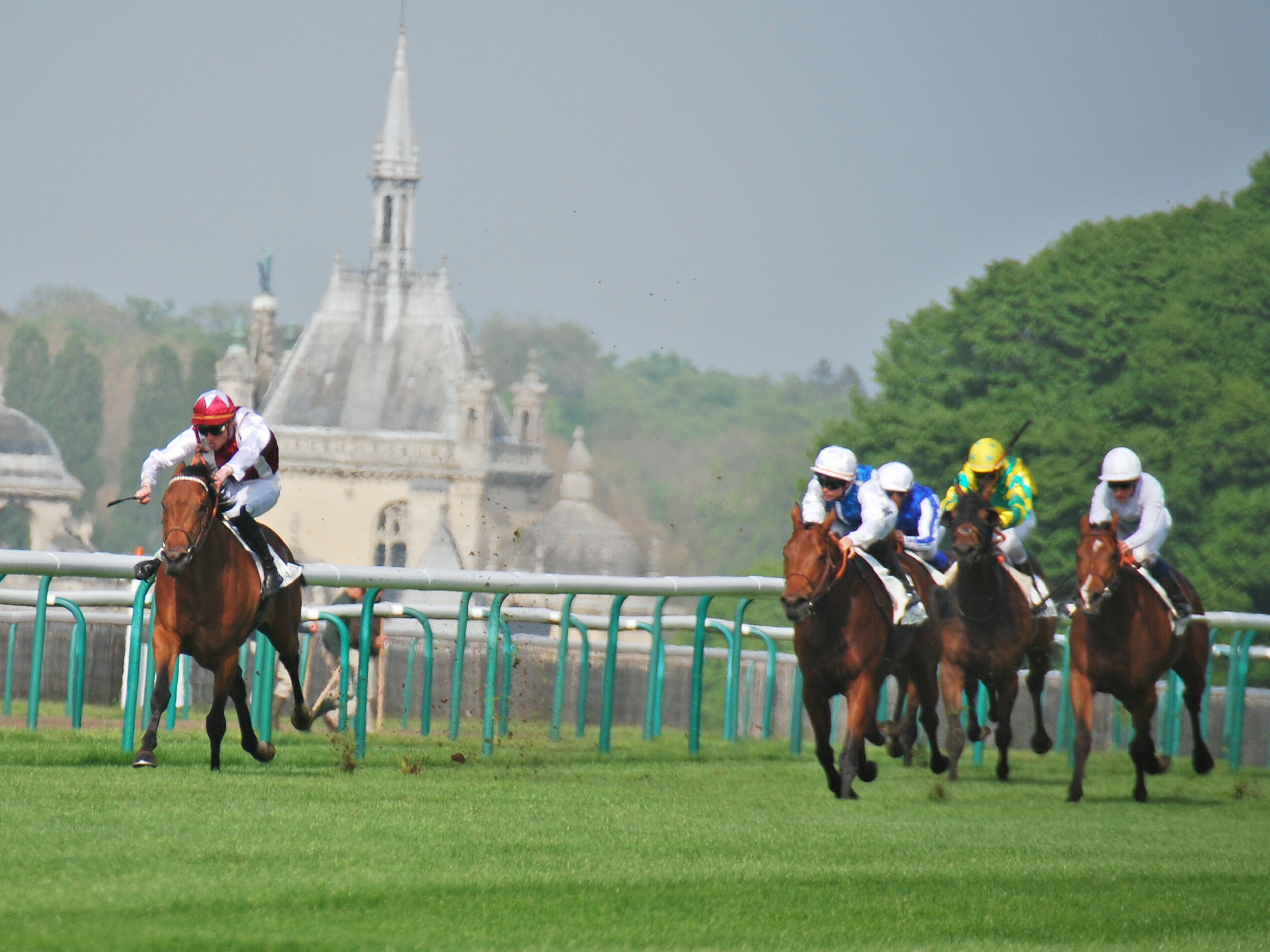 Last year’s Prix de Guiche winner, Almanzor, went on to win the Jockey Club and ended the year as Europe’s champion 3-year-old colt. The previous horse to do the Guiche/Jockey Club double was Lawman in 2007.

Since the distance was reduced to 2,100 metres, British-trained horses have won it twice, through Shamardal in 2005 and The Grey Gatsby in 2014.

Laffon-Parias, currently the fifth highest French-based trainer in the TRC Global Rankings, has been training in France since obtaining his licence in 1992 after spending the four previous years as an assistant with Criquette Head-Maarek.

“Based in Madrid, I was a gentleman rider for jump and flat racing, riding at tracks throughout Europe during the 1980s, and I had a Madrid permit to train,” he said. “After the Madrid track closed in 1988 due to financial problems, I saw fewer opportunities in Spain and, through contacts, decided to try my luck in France.

“I started as an assistant with Criquette Head in Chantilly and stayed for four years, benefitting from her vast training knowledge and by working for a big French yard, though I also continued as a gentleman rider until 1991, ending an 11-year career where I won 150 races and had been Spanish champion five times.

“After passing my French training licence in 1992, I decided to start out on my own in Chantilly and began with seven or eight horse from Spanish clients.”

Six years later, Carlos Laffon-Parias had his first G1 winner when Spadoun won the 1998 Criterium de Saint-Cloud for owner Jose Gonzalez. He has since won a number of big races, including the Poule d’Essai des Poulains in 2009 with Falco, the 2012 Singapore Airlines International Cup with Chinchon, the Arc the same year with Solemia and last season’s Vermeille with Left Bank.

Laffon-Parias nowadays has around 60 horses and trains for some high-profile owners like the Maktoum family and the Wertheimers, as well as a number of his original Spanish owners.

Criquette Head-Maarek’s son-in-law is hoping Recoletos will make him a fourth generation trainer from the family to win the Jockey Club. Criquette won it with Bering in 1986, her father, Alec Head, won with Roi Lear 1973 and Val de l’Orne two years later, and grandfather William Head scored with Le Fabuleaux in 1964 and Goodly in 1969.

Criquette’s brother, Freddie, who spent over 30 years as a jockey, won the Jockey Club four times, before becoming a trainer in 1997. He holds the unique record of having won the race as a jockey both for his grandfather (Goodly) and father (Val de l’Orne).

The Arc, however, is an even more successful race for the family, as this September 2015 TRC article shows.

Laffon-Parias’ best place in the Jockey Club was with Prospect Park, second to Blue Canari in 2004. “I have been second, third and fourth in the Prix du Jockey Club, so hopefully I can go one better if not this year then sometime in the near future,” he said.

Win lose or draw on Sunday, eventually when hanging up his training boots Laffon-Parias will return to live in Spain.

“I like the training life in France and have a good, capable team of 20 staff in my stable, which is important as when I am away they all know exactly what to do without supervision. I also get on well with the other trainers here.

“But my roots are Spanish. I have a house there, relations, some friends and it’s where I will go when I eventually retire.”