What do the Japanese Thoroughbreds Bless Journey, Satono Crown and Yamakatsu Ace have in common? Answer: they are the only runners in Sunday’s 16-strong Arima Kinen - the biggest betting race in the world - that are not grandchildren of Sunday Silence.

With a prize fund this year the equivalent of $5.63 million, making it the joint richest race in Japan (alongside the Japan Cup) and one of the ten richest in the world, the Arima Kinen symbolizes as much as any event the extraordinary influence of the 1989 Kentucky Derby, Preakness and Breeders’ Cup Classic winner, who was voted the 17th greatest racehorse in the U.S. of the last 50 years by an expert panel in a TRC poll only last week.

It if came to a vote on which stallions of the same period have left the most profound mark on the breed, it's a fair bet the 1989 U.S. Horse of the Year would rank considerably higher.

There’s a pretty strong chance Sunday’s renewal will continue that sequence, with 13 of the 16 runners descending from the son of Halo. 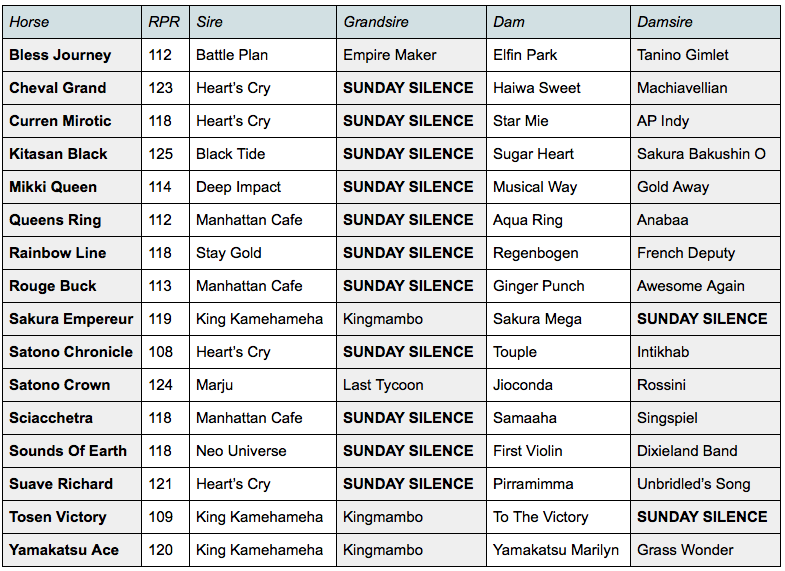 While Heart’s Cry, ranked just 55 in the TRC Global Rankings, and fourth in Japan, is responsible for four runners, which is 25 percent of the field, and Manhattan Cafe (world #151) and King Kamehameha (#28) have three apiece, Japan’s mightiest stallion of the decade, Deep Impact, has just one runner this time, the outsider Mikki Queen.

Indeed 2017 has not been particularly outstanding for the current world #3, who had a brief stint at #1 earlier in the year but has struggled to stay ahead of the young upstart Frankel in third spot in recent weeks. But don’t think for a moment that Deep Impact is on the wane.

As James Willoughby points out today, 2018 is full of potential for the Shadai great - in Japan and beyond.

Over in Ireland, the progeny of two of his liaisons with Galileo mares may yield major dividends - in the shape of Saxon Warrior, favourite for the Epsom Derby, and September, second favourite for the Epsom Oaks, while you’ve only got to look at the video below to appreciate the excitement another colt is already generating ahead of the 2018 campaign.

This was the wonderfully easy victory of Deep Impact’s son Danon Premium last Sunday in Japan’s top juvenile race, the G1 Asahi Hai Futurity at Hanshin. He could be the best of the lot.