The significance of the Arima Kinen to Japanese racing, and the enormous public interest that makes it by far the biggest betting race -- not just in Japan but in the world -- needs explaining to outsiders.

The first thing to know is that for citizens of Japan, the most important day is New Year’s Day, as this is when we celebrate the renewal of the year, an event comparable to Christmas in Western countries. New Year’s Days are virtually holy events for Japanese. They are the occasions when we spend time with our families and stop almost all business activity for three full days. This has been the custom in Japan from ancient times and it was observed even during the 1960s and ‘70s, a period during which the Japanese were often described by the rest of the world as “workaholics.”

Nakayama Racecourse, approximately 13 miles west of the center of Tokyo, was packed as usual on December 22 -- or rather more than usual to be exact -- as the crowd of 124,782 comfortably surpassed last year’s and was reminiscent of the golden era of Japanese racing’s popularity (the pre-economic downturn early 1990s). In fact the crowd, though huge, was slightly smaller than that for the G1 Japan Derby at Tokyo racecourse on May 26, where the on-course attendance was 139,806. But this is easily explained and should not be taken an indication that the Derby is the greater event. Tokyo racecourse is much larger than Nakayama with a much greater grandstand capacity. In fact, Nakayama is so tightly packed on Arima Kinen Day that it reminds us of the trains in Tokyo at rush hour. When you also consider the weather - end of December is very chilly, windswept and quite tough for fans - the on-course attendance at Nakayama on Arima Kinen Day each year is nothing short of incredible.

So too is the betting. Total wagering on the Arima Kinen in 2013 was JPY ¥35,088,387,600 (USD $334 million). Meaningful comparison can be drawn between the Arima Kinen and Japan’s second biggest betting race by reference to the fact that total turnover on the 2013 Japan Derby was JPY ¥ 23,717,714,300 (USD $226 million). Betting on the Arima Kinen is therefore 48 percent greater than on the Japan Derby, and almost dwarfs turnover on the other great betting races of the world. By comparison, turnover on the UK’s Grand National, the biggest betting race outside Japan, is around GBP £100 million (USD $164 million) and on the Melbourne Cup last year turnover in most populated states of New South Wales and Victoria was AUD $90.1 million (USD $80 million) although that does not include bets from the other states. The Arc, The Derby at Epsom, and the Kentucky Derby trail some way behind. 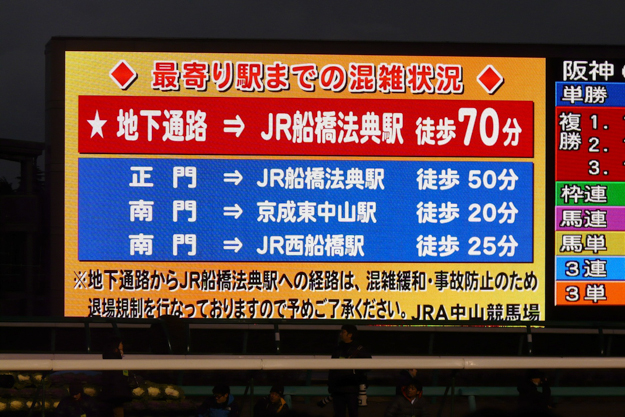 In Japan, as with the Melbourne Cup or the Grand National, if you place a bet on horse racing only once a year, the Arima Kinen is the race you bet on. It is a Japanese winter tradition, and as with the world’s other great races, the name of the winner resounds around the country.

Apart from tradition and the end of year climax that makes the Arima Kinen so popular in Japan is the way in which the runners qualify to run. Uniquely among major races worldwide the majority of runners are selected through voting by racing fans. This clever idea to get the people involved in the composition of the field was belongs to Yoriyasu Arima, chairman of Japan Racing Association at the time of the first running of the race. It was Arima’s intention to create a feature attraction at Nakayama Racecourse that could match the then pre-eminent status of the Japan Derby at Tokyo. Arima used to be the owner of the Tokyo Senators, one of Japan’s premier professional baseball teams, and he got the idea of creating a horse race in which the runners were selected by popular vote from the same system used to select All-Star baseball teams.

The race called “The Nakayama Grand Prix,” in which 10 out of the 16 runners are selected by vote and six chosen by a selection committee, was first run on December 23, 1956, and the field for that first running was gorgeous. The three-year-olds were represented by Japan Derby winner Haku Chikara; by the Satsuki Sho (Japanese 2000 Guineas) first leg of the Triple Crown winner Hekiraku, and by the Kikka Sho (Japanese St Leger) the final leg of Triple Crown winner Kitano Oh. The older horses included Meiji Hikari, winner of the Emperor’s Cup (Spring) and Mid Farm, winner of the Emperor’s Cup (Autumn). The race made headlines in newspapers and on TV, and was a triumphant success.

However, only 17 days after the first running of the Nakayama Grand Prix, tragedy struck its founder. Yoriyasu Arima met with an untimely death after contracting acute pneumonia. It was immediately proposed that in his honour the race should be renamed the Arima Kinen (”kinen” means “memorial” in Japanese) and it has borne that name ever since the second running in 1957.

The Arima Kinen very quickly assumed special status as “the people’s race” in Japan. At the time there was no Japan Cup (first run in 1981), so the Arima Kinen quickly became recognized as the great opportunity for racing fans to witness competition between the best older horses and the best three-year-olds to establish a supreme champion. It has also provided a rare opportunity for the best fillies and mares to compete against the colts and adult horses, and it was quickly accepted as one of five most important races in Japan, along with the Triple Crown for three-year-olds and Emperor’s Cups. The first horse who swept all five races was Shinzan, who completed the Triple Crown in 1964 and won an Emperor’s Cup and the Arima Kinen in 1965. He was duly acclaimed as the first “Fivefold Crown winner.” 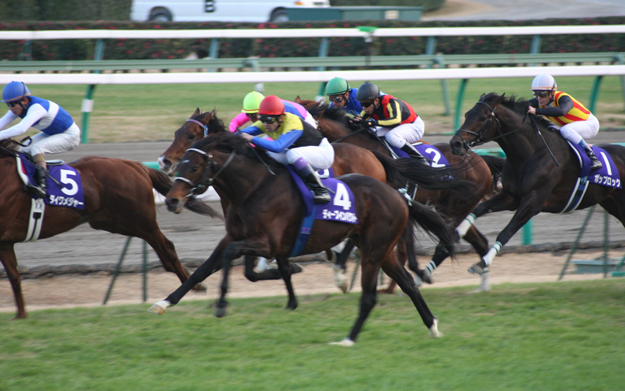 It’s a matter of pride to fans as well as organisers that the Arima Kinen is the only major race in Japan to have been run at the site of its original running every single year. Not even the Japan Derby can make that claim as it was first run at Meguro racecourse in 1932, then transferred to Tokyo in 1934.

Total wagering on Arima Kinen broke the JPY ¥10 billion (USD $10 million) barrier for the first time in 1972, and reached JPY ¥87.51 billion (USD $840 million) in 1996 when horse racing was absolutely booming in Japan. In dollar terms this is almost certainly the world record amount ever bet on a single race. Voting for participation attracts interest almost throughout the season. In the 1989 Oguri Cap, the great people’s favourite in 1980s, received 197,682 votes from Japanese racing fans. This remains the record number of votes for a potential Arima Kinen runner. 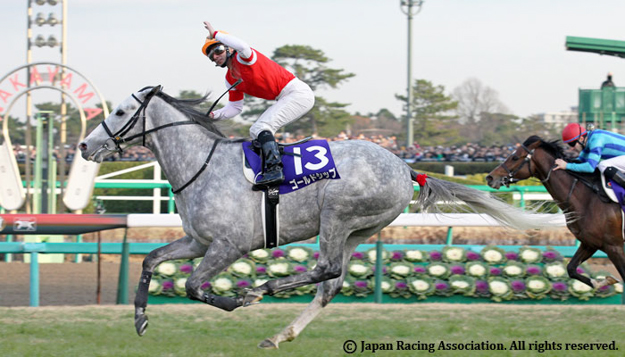 The admission fee at JRA racecourses is JPY ¥200yen (USD $1.90). This is a flat rate regardless of the standard of the card and it’s quite usual at all racecourses before major races for fans who want to grab their ideal spot, normally near the winning post on the stand rail, to form long queues as they wait for the gates to open. At Nakayama on,the day of the Arima Kinen, more than 4,000 fans were queuing when the gates were opened at 7:30 in the morning. The person who was first in the line had arrived there on the evening of December 15, a week before the race and had spent seven days and nights there.

It had been announced beforehand that the Arima Kinen was to be the final start for Orfevre, bred by Shiraoi Farm and owned by Sunday Racing Club. His racing career had been illustrious but he has been loved by Japanese racing fans as much for his wilfulness and eccentricity as for his brilliance. Orfevre, trained by Yasutoshi Ikee, became the seventh Triple Crown winner in Japan and won his first Arima Kinen as a three year old in 2011. But quirkiness has always been a major part of his character and another reason for his fame. 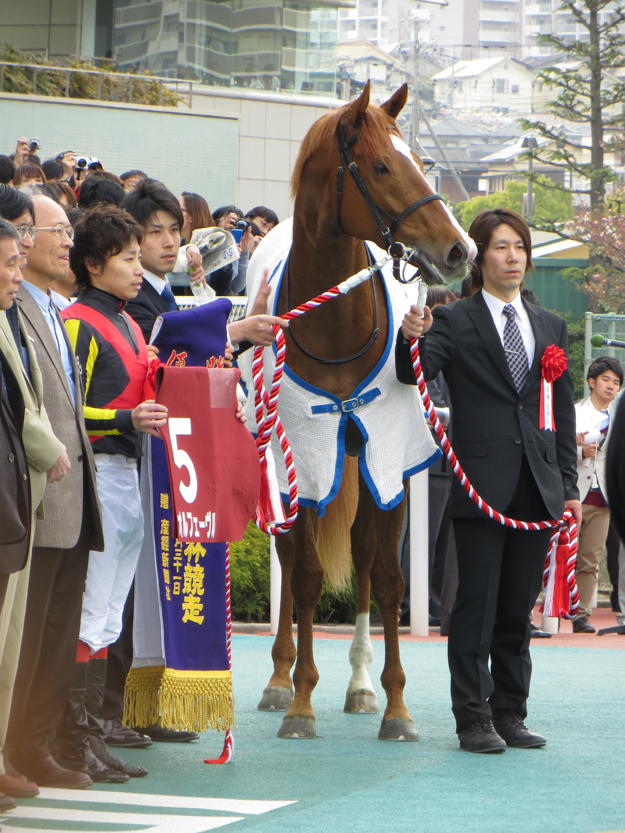 Twice in his career he’s thrown his rider after passing the finishing line. In the 2012 G2 Hanshin Daishoten, he completely ignored his jockey and refused to make the far turn, running straight toward the outside rail of Hanshin Racecourse. Then, he abruptly decided to start running again, made up 20 lengths of lost ground, and somehow managed to finish second. The oddity of his personality was most famously visible in Paris in October 2012, when, without any effort by his rider Christophe Soumillon, he hit the front 300m out in the G1 Prix de l’Arc de Triomphe. He looked sure to win the Arc as he pleased, then for reasons known only to Orfevre suddenly started to pull himself up, ran across the track, bumped the far rail, and was beaten by Solemia by neck. A year later, attempting to redeem himself in the Arc after a setback earlier in the year that kept him off the course for over six months, he finished second again, this time beaten by super French filly Treve.

While he was the second best in Paris in October 2013, he was in outstanding and quite peerless form at Nakayama two months later. Held up near the rear, Orfevre rounded the field about six horses wide, again without apparent effort, struck the front early in the straight and then just pulled further and further away. His eight length victory was the second largest in the history of race, after Symboli Kris S, who’d come home nine lengths clear in 2003.

A retiring ceremony for Orfevre was organized on the day of Arima Kinen. A crowd of 60,000, nearly half the total attendance, stayed at Nakayama waiting for the ceremony that started 90 minutes after the Arima Kinen, to say good-bye to their hero. Orfevre, who won 12 races including six G1s from 21 starts and earned JPY ¥1,344,084,000 in Japan and EUR €2,159,880 in France, to become the second highest prize money winner in the history of world racing after TM Opera O arrived at Shadai Stallion Station in Hakkaido, where he will start his stud duty in 2014 breeding season. His stud fee in 2014 is JPY ¥6,000,000 (USD $57,500). 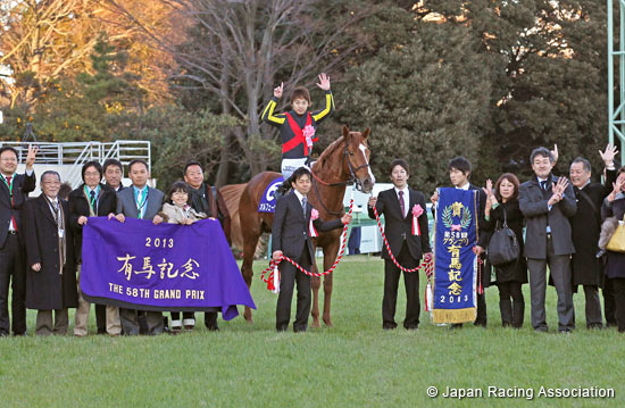 The extreme brilliance he had shown three days earlier not only added to his own reputation but added another layer of lustre to the Arima Kinen itself. No doubt the person who camped out in the cold for a week, waiting to see what Orfevre might be able to do if the mood really took him, thought it was well worth the wait.