You’ve only got to take a look at the two videos below to understand why they’ve been saying for years in Hong Kong and Australia that Zac Purton is one of the world’s very best jockeys.

The kind of judgement, rhythm, balance and confidence that he displays on both his G1 winners at Sha Tin on Sunday - Ivictory in the Chairman’s Sprint and Beauty Generation in the Champions Mile - can only be attained by a rider at the very top of his game.

Always in command: a Champion display on Beauty Generation

There’s no doubt the 35-year-old Aussie is right at the top of his just now, so it’s fitting that these two triumphs have catapulted him to an all-time high in the TRC Global Jockeys’ Rankings. 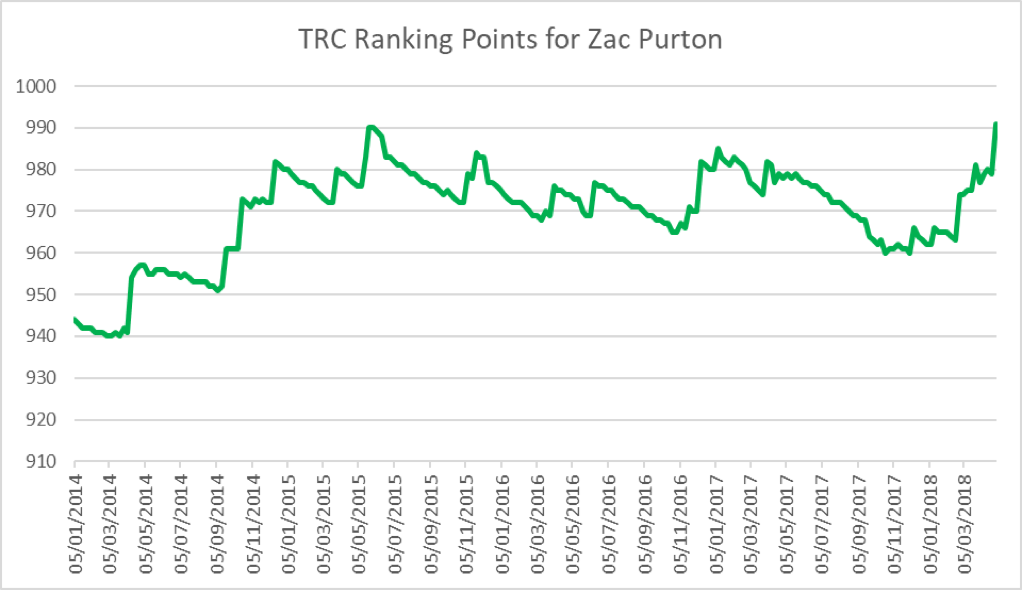 Purton is the week’s biggest points gainer (+12), which puts him up to world #17 from #23 and maintains his upward trajectory in the standings (see graph alongside).

This is some achievement for a rider based in Hong Kong, where the Group-race opportunities are limited. Indeed Purton, like his Hong Kong title rival Joao Moreira (world-ranked ten), appears in our rankings list with a Modal Country of Australia as they have both had more Group-race rides there than anywhere else.

Purton was champion in Hong Kong for one season (2013-4) before Moreira moved in and took over, but this term Purton has been pushing the Brazilian hard in the premiership. A recent spurt, including two winners at Sha Tin yesterday, has given Moreira a lead of eight (101 to 93), but this has been Purton’s best showing since that title-winning year. Third-placed Karis Teetan is more than 50 winners behind.

With three G1s in the normally Group-race starved Hong Kong on Sunday, it was inevitable some big movers would emerge. Purton gained more points than anyone else, but John Size was only just behind. Size, another Aussie, produced his third big-race 1-2-3 of the last six months when Ivictory led home stablemates Mr Stunning and Beat The Clock in the G1 Chairman’s Sprint Prize.

The consequent ten-point lift means the 63-year-old moves up one place to world #6 in the trainers’ standings, taking him out of a tie with John Moore as the top trainer based in Hong Kong, even though Moore is responsible for Beauty Generation.

The 4-year-old Ivictory was awarded a Racing Post Rating of 122 for an impressive win in his first try in Group company after a string of handicap successes. The son of Mossman (+6pts, up from #55 to #39) looks likely to develop into one of the world’s leading sprinters.

Cruz climbs too - thanks to super Pakistan Star

The biggest of the three G1s on Champions Day at Sha Tin on Sunday, the ten-furlong Audemar Piguet QEII Stakes, was won in devastating fashion by Pakistan Star, whose conditioner, Tony Cruz, is Hong Kong’s third-ranked trainer. Cruz, 61, gains eight points, moving him up two places from #13.

Pakistan Star has been a frustrating contestant in numerous top-level events over the past 12 months, often appearing to not carry through with his effort, but on Sunday he looked a superstar (see video below). Perhaps jockey William Buick has found the key to the 5-year-old.

Buick (+2pts, still at #12) was actually the third-choice rider. Pakistan Star was to have been ridden by British champ Silvestre De Sousa, but he had to remain in England so the mount went to Kerrin McEvoy. Then an ear infection meant McEvoy had to remain in Australia. Step forward Buick, who was at Sha Tin to ride Godolphin’s Blue Point, who disappointed in the Chairman’s Sprint.