Racing may have been taking place at the newly redeveloped Longchamp - or ParisLongchamp as it is now known officially - since April, but its first big test comes on Arc day on Sunday, when most of the vast crowd will be experiencing the new set-up for the first time. How are they likely to react to a design that some will see as radical? What do the experts who have already seen Longchamp 2018 make of the changes?

There are few with the same level of expertise as Paul Roberts, an advisor specialising in development strategy with a particular focus on sport. Roberts, of London-based Turnberry Consulting, was a key part of the team involved in the redevelopment of Ascot, and has advised on major works at some of the world’s other leading tracks, including Saratoga, Flemington and York. He visited Longchamp last month. Here is his assessment. 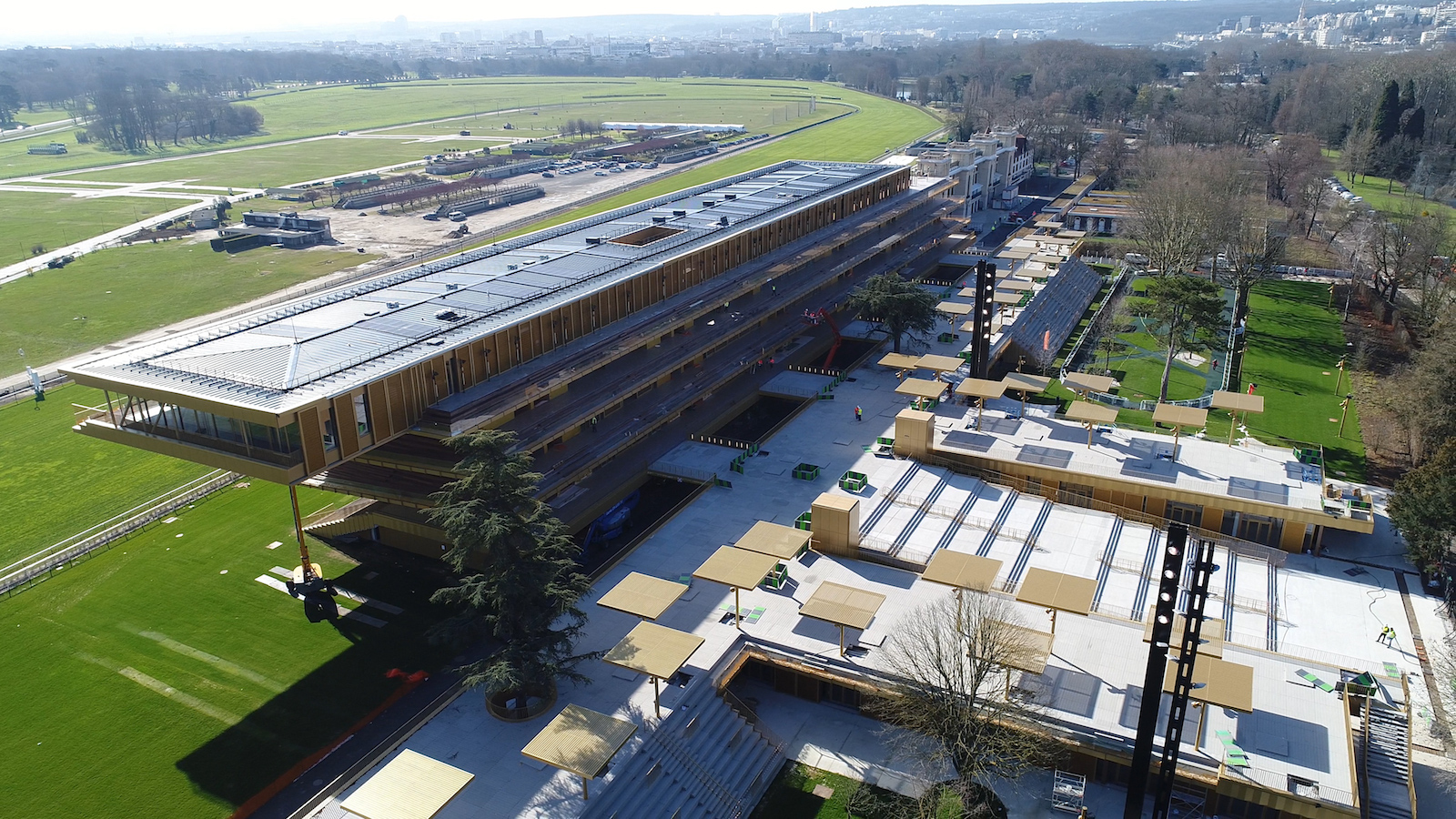 The new Longchamp is Version 4 of a racecourse that is one of the four elite tracks of Europe (it is a curious fact that the majority of black-type races in Europe take place at either Ascot, Newmarket, Longchamp or the Curragh).

Of these, Longchamp and the Curragh have had much troubled journeys to renewal. I will see the Curragh for the first time next year.

My first trip to Longchamp came in the late 1990s as part of the Ascot programme. At that time there was confidence that the Longchamp redevelopment would be completed before Ascot’s had started - not 13 years later.

This was the original, built in 1857 during the reign of Napoleon III (1851-70), on the large plain at the west of the Bois de Boulogne, the city’s newly-created park. Following the template established at Chantilly a decade earlier, its buildings were a sphere of exclusivity, built by the elite for the elite.

It included five separate stands capable of accommodating nearly 5,000 spectators. At the centre of the ensemble was the Loge d’Empereur, the imperial pavilion. It was the tallest and grandest of the structures. Rising five storeys, with a central belvedere tower, the lavishness of its fittings left little doubt as to the importance of its intended occupant. To either side of this stood a pair of identical stands – the Tribunes Reservées – one for Société d’Encouragement members and the other intended for the imperial family, ministers of state and army leaders.

The two timber public tribunes were the simplest of the architectural grouping; racegoers were provided with basic tiered wooden benches. 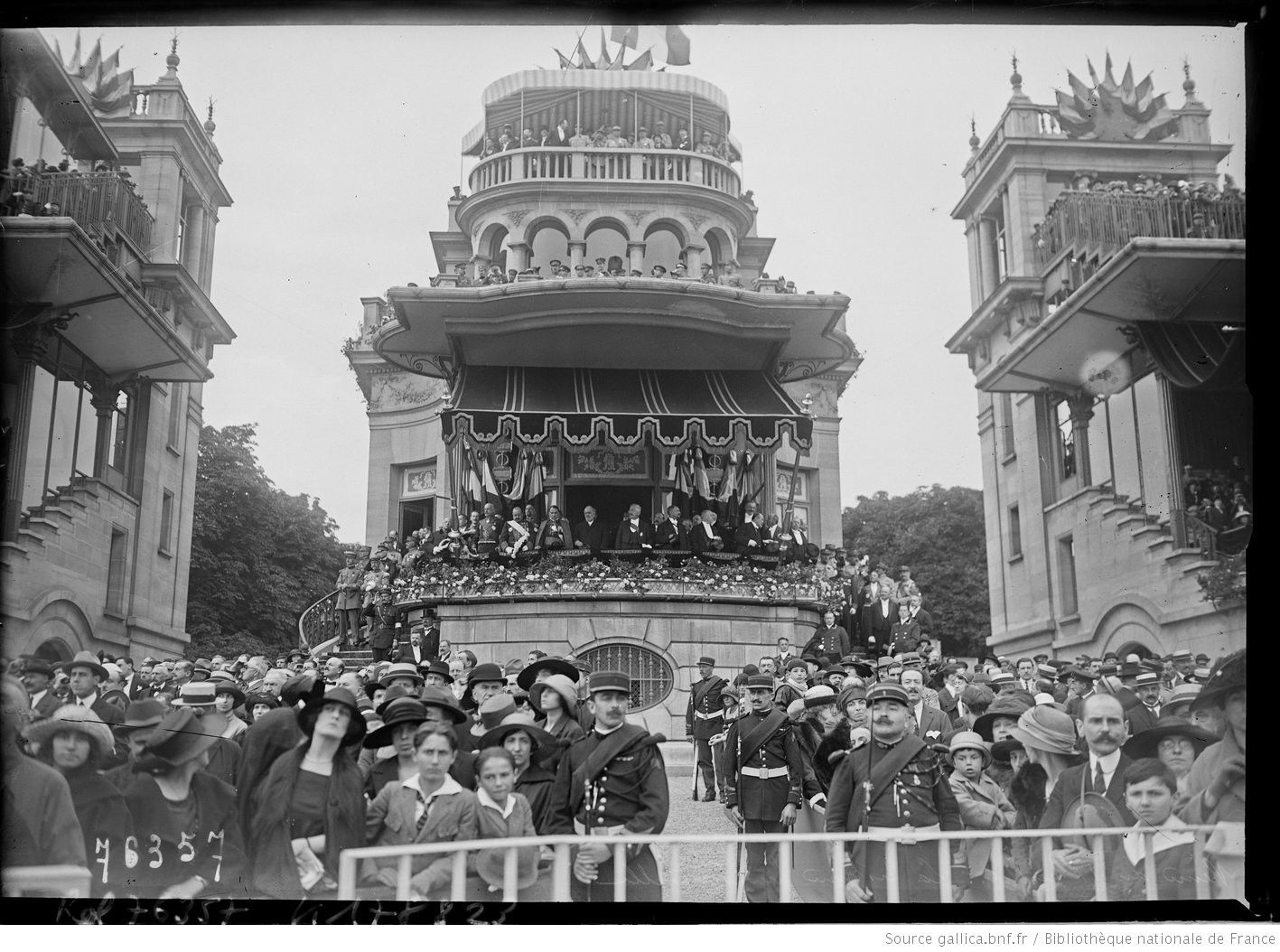 Nearly 50 years later, the racecourse replaced the original collection of stands with a gleaming new ensemble, a long line of new stands with a small, stand-alone Tribune Présidentielle as its centrepiece. They shared common architectural features with their predecessors, notably stair towers and balconies on the rear façade. However, they were realised on a far larger, more commodious and majestic scale. There were two grandstands, each possessing two tiers of raked steppings overlooking the course, while the rear elevation was three storeys tall.

Come the 1960s, Longchamp’s picturesque 1904 grandstands were no longer spacious enough to accommodate the crowds. The buildings were demolished and supplanted by three new stands, within the October 1965 to April 1966 interval between racing seasons. The new stands sacrificed much of the elegance and intimacy of the turn-of-the-century Longchamp. The modular buildings were large and functional, but ultimately lifeless and commonplace. The delicate presidential stand was replaced by ‘a sort of air traffic control tower’, bemoaned one commentator. 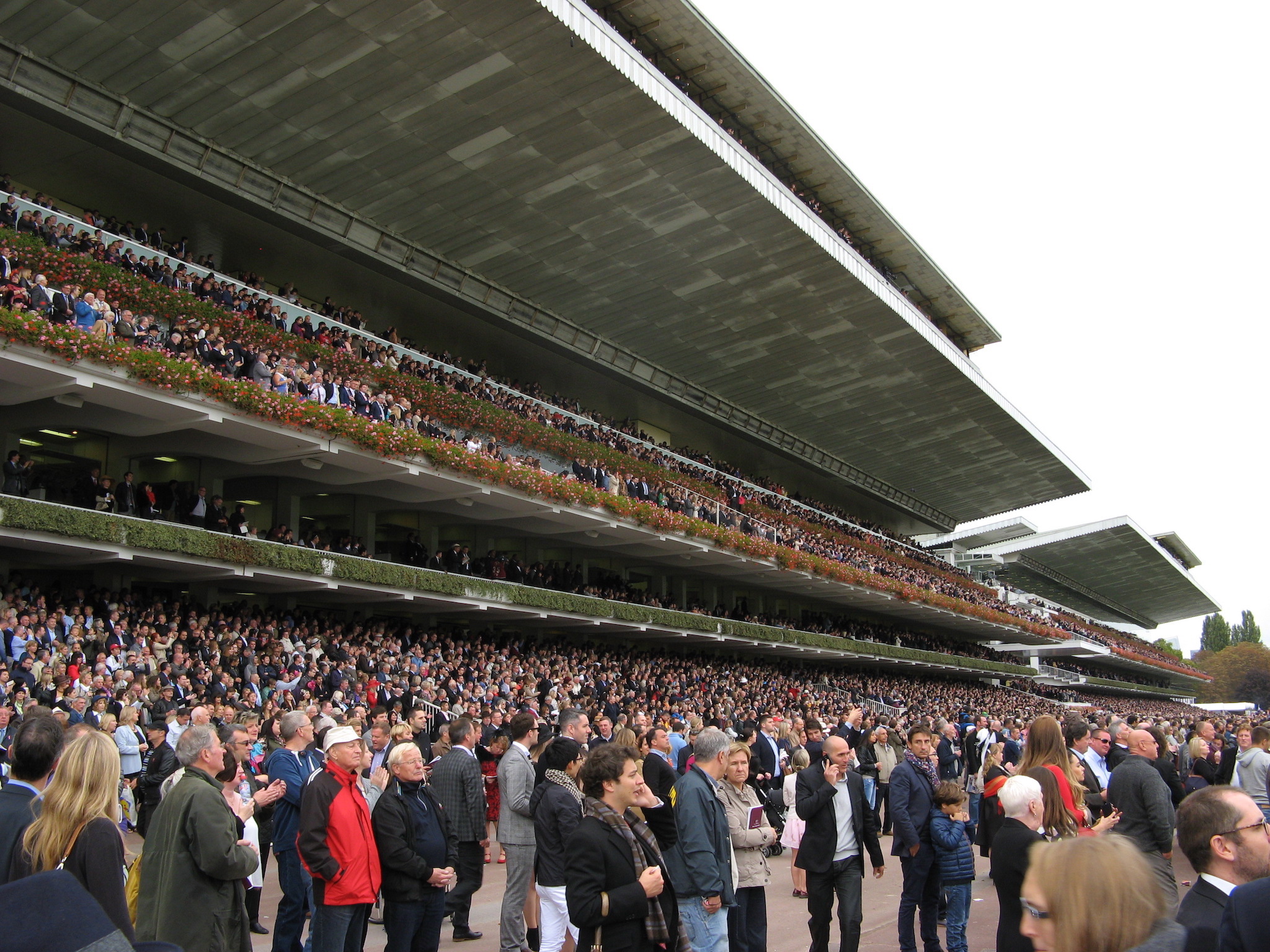 The 1960s were not kind to many courses. Poor development schemes, lacking in ambition and in a period of unrefined design, were widespread post-war, notably at Ascot, Doncaster, York and Sandown - and Longchamp. The schemes at Ascot and Doncaster have already been replaced. Sandown has survived as one of the better schemes. Bits of Haydock and Newbury linger on, now even more stark with more recent additions. So it was with great interest that I travelled to Paris on a quiet race day in September. The 1960s version was a poor solution to the trail-blazing 1904 scheme. What had 2018 brought?

The main structuring elements have been maintained. The parade ring is in a similar location, with a podium between it and the main grandstand, but the main change is the replacement of the two previous buildings, which were interrupted by the presidential tower, with a single new building. 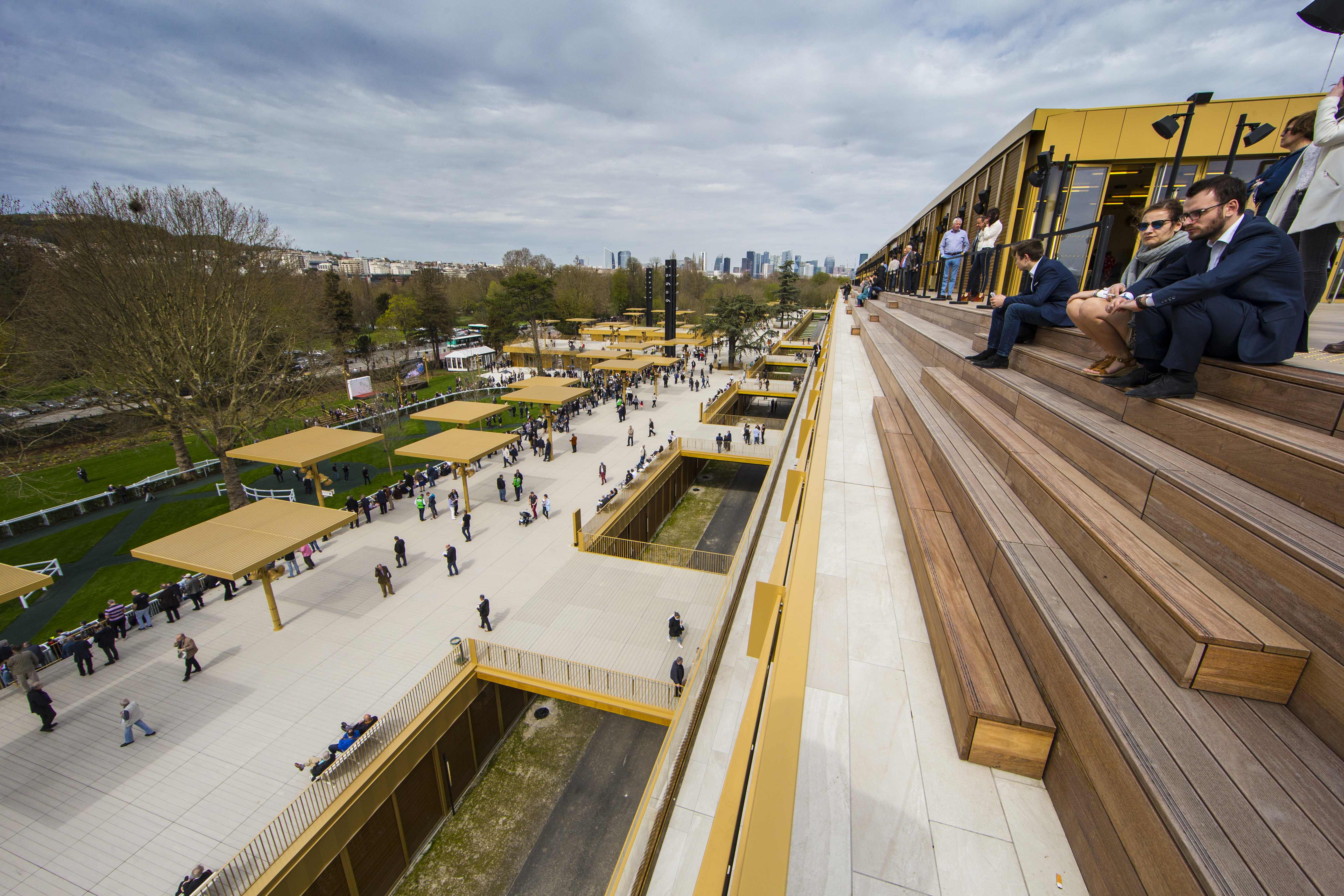 The setting and viewing are similar, with the upper-tier views equally spectacular. However, they are now enhanced by additional terraces facing the home bend end and to the rear overlooking the parade ring - less real estate, but similar in approach, especially at the upper levels. The style is orthogonal and modern, with long, sweeping lines and a cantilever at one end. This will be attractive to some and an anathema to others, but that is always the case in matters of style. It will be a few years before we get to know if it has been accepted.

The track side has been softened with some wood, and this carries through to the parade ring.

Arrival at the racecourse can be confusing, and a little low-key. I went in by a side entrance off the public highway, as I’m sure many will do, because I didn’t see the new grand entrance, which has an ascending staircase presided over serenely by the statue of the legendary champion Gladiateur. This is a distinct improvement and no doubt will be impressive on Arc day, but when I was there I only found it later. 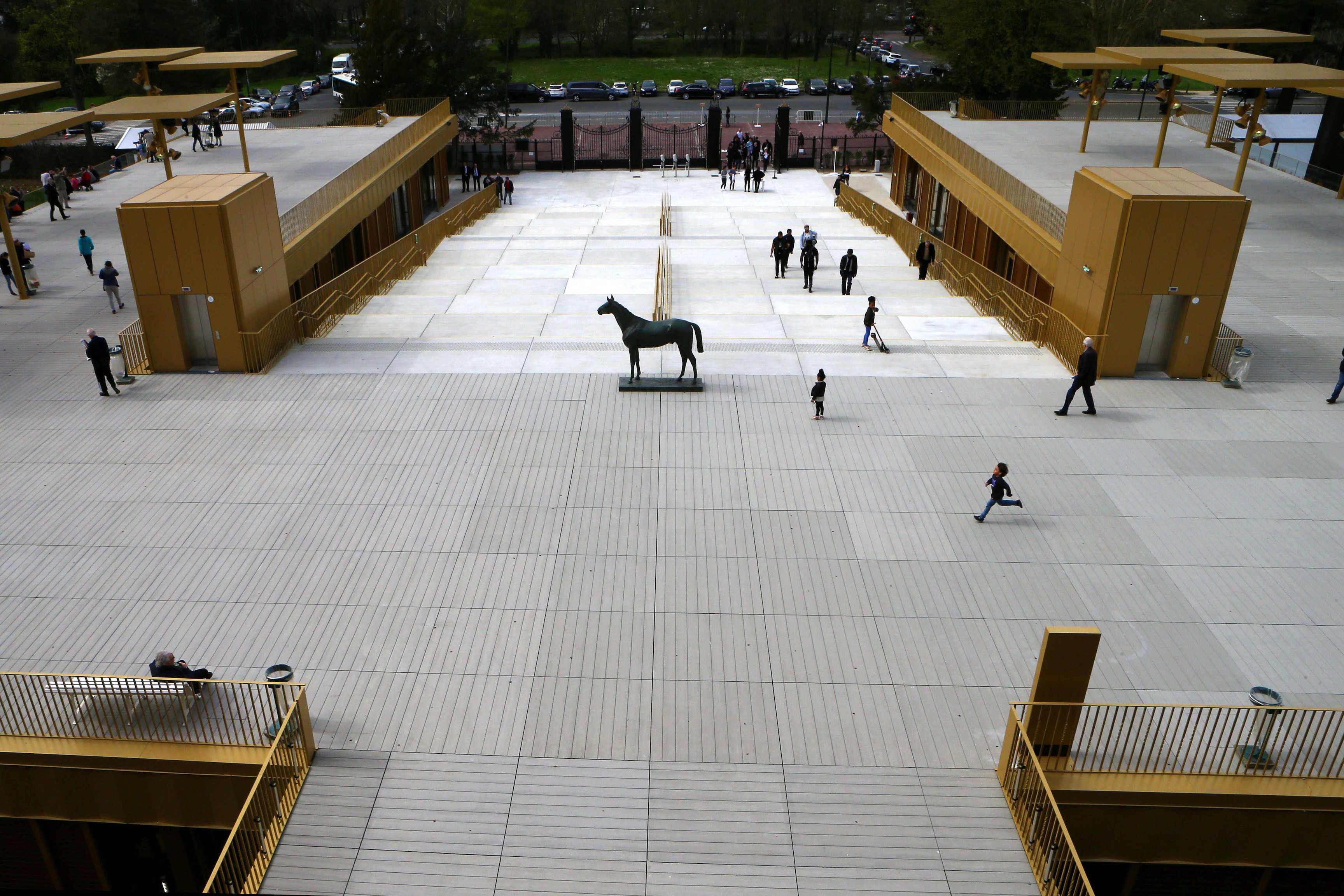 There is an interesting area past the finishing post that will be dressed for larger meetings but, as with the prior schemes, the lawns fail to connect with the racecourse as well as they do at other venues, and the track itself remains broad and wide.

A great failing that has not been addressed arises because of the width of the track - I don’t know of one anywhere that is wider. Inevitably the runners race up the far rail away from the stands in the home straight. Even when the rail is moved closer, as on Arc Weekend, the horses are so far from the stands that what should be an electric atmosphere is severely reduced. 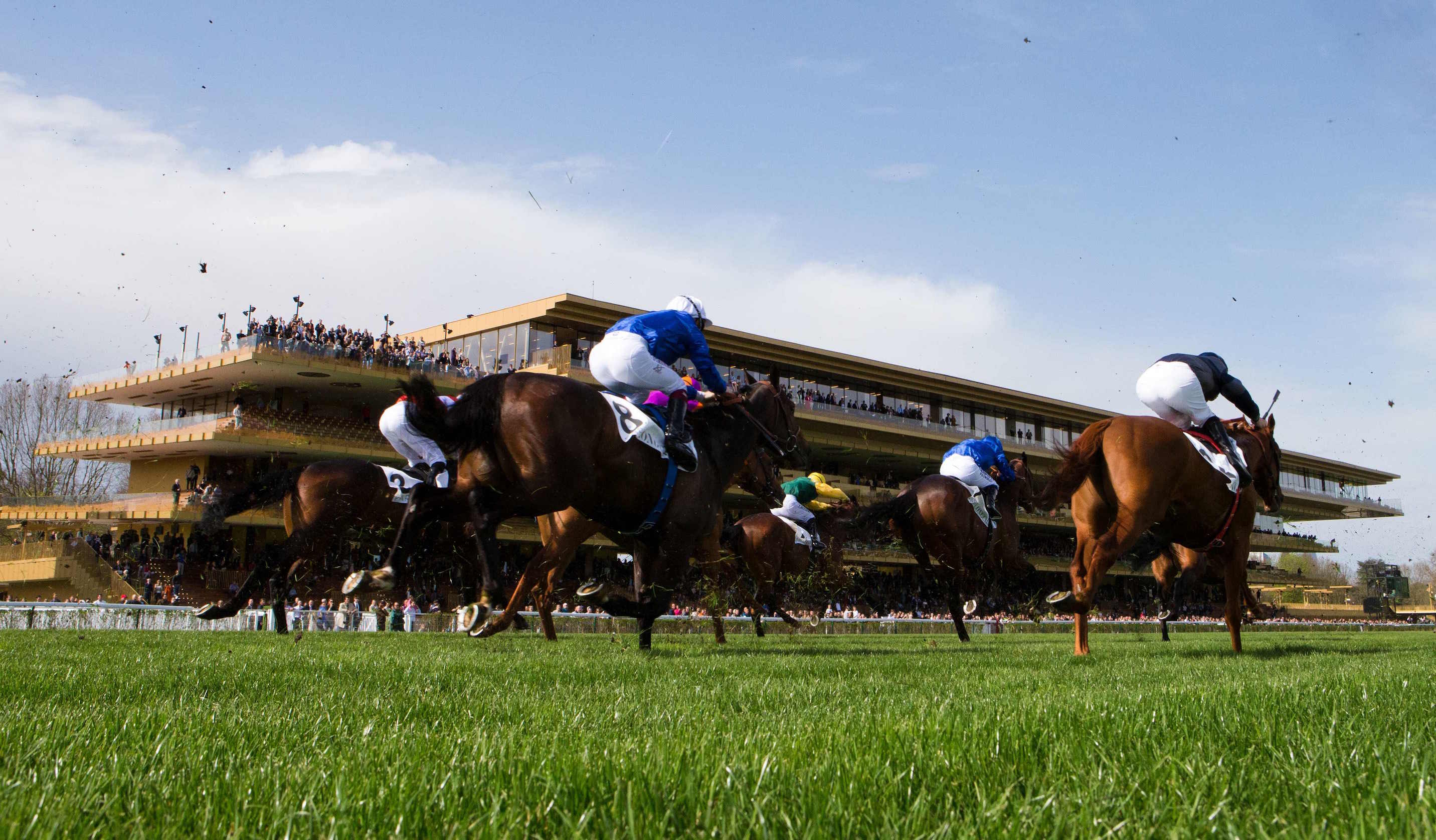 In other areas, there are major strides. The stables are excellent, and a new walking ring close to the parade ring is a positive addition that will help anxious horses. The rebuilding of the grandstand means a new weighing room has been built to international standards. However, the jockey exit and the scope for theatre have been missed both with this and the horse walk. The potential opportunity that has been grasped at Goodwood, for instance, has been missed, although that can be fixed.

A joy, however, is the impressive bistro, which now flanks the parade ring. It is well appointed and well positioned and particularly effective for a small day. On larger days it will be a popular spot. It provides some containment to the parade ring.

By the parade ring, there is the curious experience of the service road, which runs along the rear of the stand. I wasn’t looking for it, but I ended up walking along it almost by accident. This is the above-ground equivalent to what is underground at Ascot. 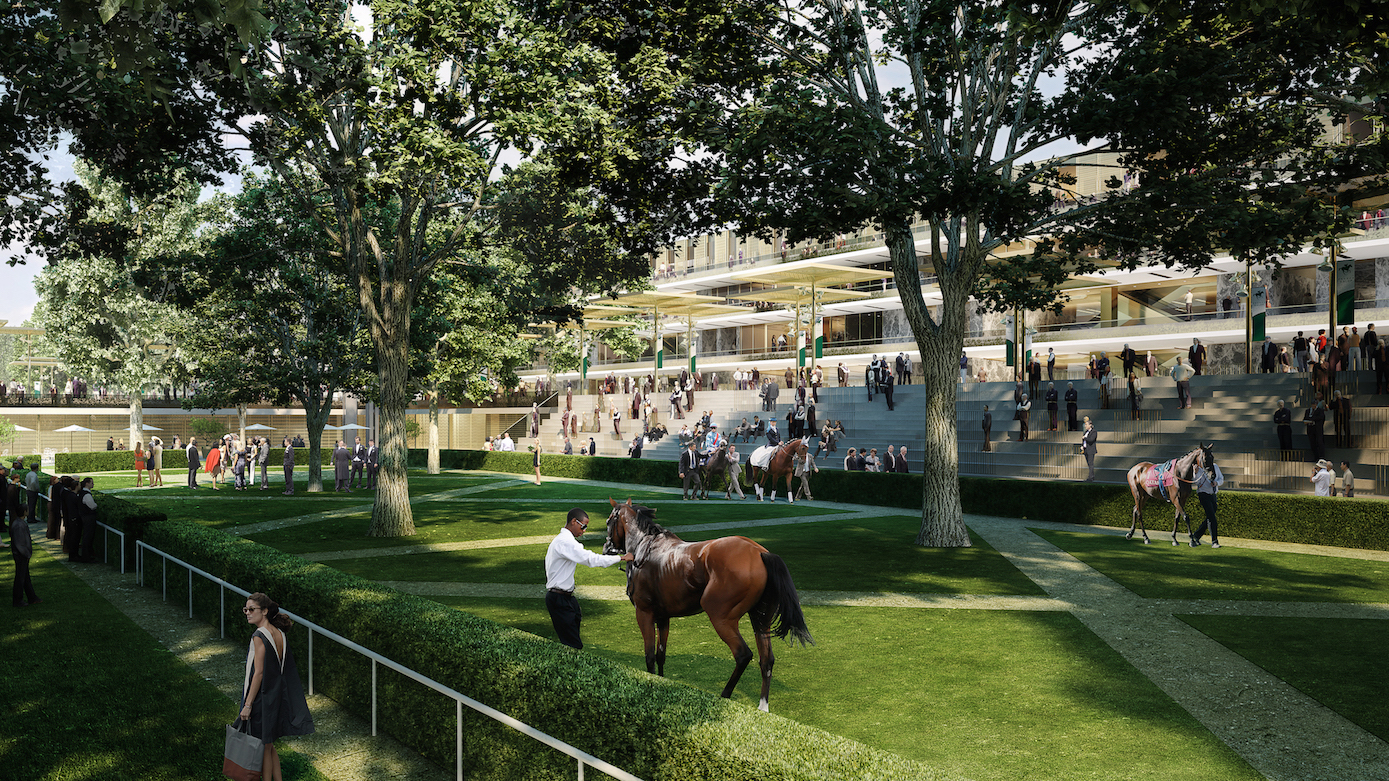 Overall, France Galop have modernised Longchamp – a difficult task. The update is refreshing, but it has been developed along similar lines to the old structure. It is much awaited and needed.

The key thing is what is done from here. It takes five years or so to get the programming of a new racecourse settled and effective. The change is so dramatic in what is a conservative sport that it is unrealistic to expect perfection in the short term.

There are many improvements here, but will racing learn to love Longchamp Version 4? Only time will tell.