The evolution of the rankings within our Sires’ category is perhaps the most interesting aspect of TRC Global Rankings. The rankings have proved themselves adept at capturing new trends in global bloodstock – such as the rise of Juddmonte Farms’ leviathan Frankel – as well as human observers, but the advantage of a numerical system is the ability to quantify otherwise subjective assessments.

It is time to look back at the returns for 2019 in just the same way we considered the other categories in earlier parts of this series concerning the Jockeys and Owners And Trainers.

First, we will look at the aggregate of returns and then the biggest movers up the rankings during the course of the year. We will see how the hierarchy has shifted little during the year, except for a return to prominence by a sire we used to have at the top of the charts every week until a dip in his fortunes abbreviated this run. 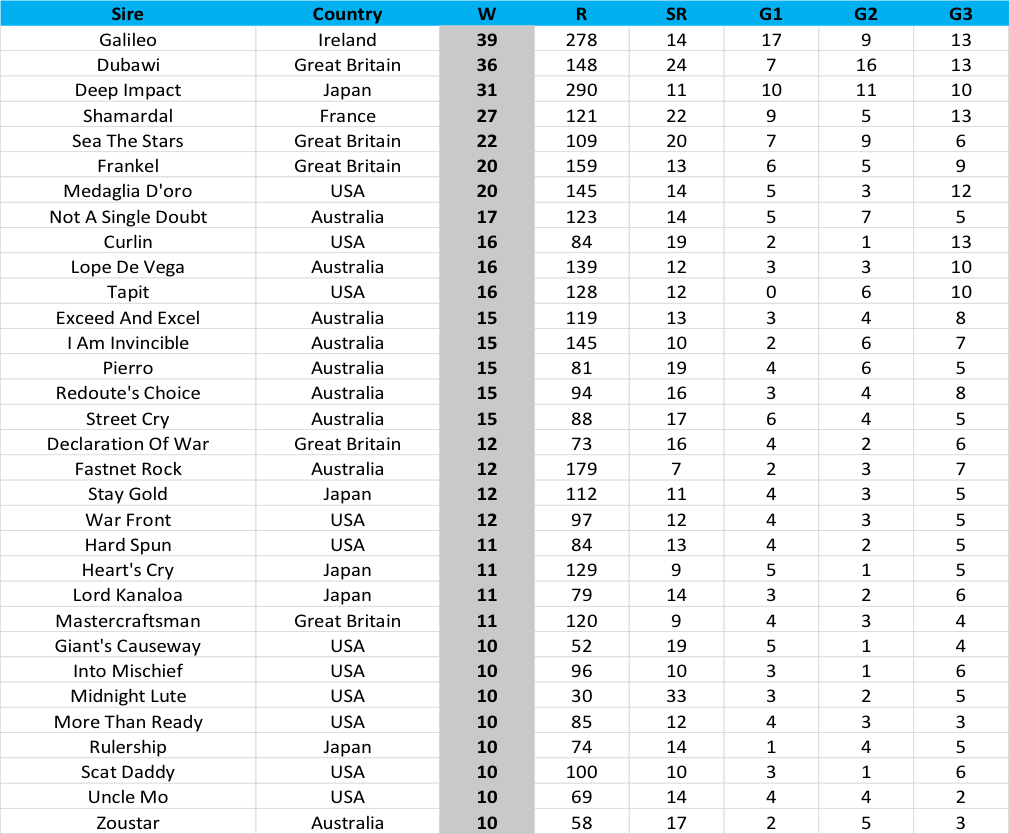 In terms of aggregate wins, the year ended as every other one in the TRC Global Rankings era has done: with the magnificent Galileo leading the way by volume of success:

Galileo’s Performance Index – our exclusive rating of the likelihood any of his runners will defeat those of other sires in head-to-head match-ups next week – fell 12pts during the campaign.

This is partly because he is achieved roughly a mean number of winners for him, but at a lower strike-rate than is typical. But there is a lot more to our calculations than this: Galileo is less dominant than in the 2016 and 2017 seasons measured by his success rate against other sires head-to-head (we make allowances for situations in which there is more than one of his runners per race).

We rank Dubawi higher than Galileo because, in a very large sample of results, his runners tend to beat Galileos whenever they are matched-up. Since 2017, for example, here is the head-to-head Win-Loss record for Dubawi against some of the other top sires: 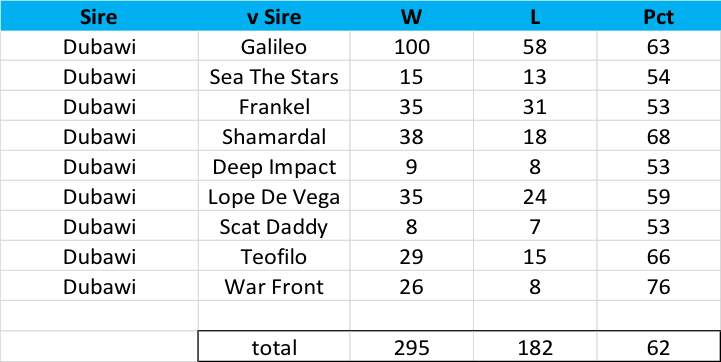 Head-to-head records are the fairest way to judge the relative potency of stallions according to all our research. It stands to reason why this is the case: in other sports, championships are decided by tournaments where the competitors have an equal – or close-to-equal – chance to win because they play the same number of games or have access to the same number of tournaments.

Now, with sires, the volume of success is a very strong indicator of potency because we are recording results only in Group / Graded races. And the mere fact that a stallion is represented is informative. But, we decided long ago that TRC Global Rankings would stand or fall by its ability to predict the results of future races, and to do that we need to decompose the multi-way result of a race head-to-head, so that we can remove the effect of a stallion simply having more runners because he is further down the road of his career, or because he covers a larger book of quality mares.

There is no doubt that Galileo is the greatest stallion of the last 30 years when measured in terms of volume, and, as this is what most people care about, his legacy is very likely to be unsurpassed for several generations to come. But, on the 158 occasions one of his runners has met one of Dubawi’s in the last two years, the Dubawi runner has come out on top no fewer than 100 times (63 per cent).

Any ranking system that takes itself seriously as a predictor cannot ignore this. And we don’t.

This says nothing about whether we think Dubawi is ‘better’ or ‘worse’ than Galileo, as some people seem obsessed in believing we are saying. No, what it means is that Dubawi v Galileo has tended to go to Dubawi, and that is what we care about. Others, even most others, care more about volume, regardless of any other consideration. That’s fine.

Moreover, Dubawi also dominates every other stallion in the world, as the table above shows. In total, Dubawi is 295-182 against the world’s greatest stallions who exist in his realm. This is a stunning record, a 62 per cent strike rate head-to-head against the greatest names in this domain.

But it wasn’t Dubawi or Galileo we would name as the ‘Sire of 2019’. It wasn’t a flashy new name of one of those we consider will eventually lead these rankings, like Frankel.

The distribution of rankings for Shamardal in the TRC era shows that this position is exactly where he deserves to be. We have produced so-called ‘legacy rankings’, which go Galileo – Dubawi – Deep Impact – Shamardal even before this year. While most people would have easily named the first three, fewer would have tabbed the son of Giant’s Causeway.

In fact, Shamardal has been ranked #3 15 times, #4 68 times and #5 69 times in the 313 weeks we have produced figures. He was last #3 in August 2015, and was still #4 in June of the following year. But then his decline ensued, punctuated by this season’s splendid returns which featured the likes of dual Royal Ascot scorer Blue Point and the top-notch juveniles Pinatubo (Britain) and Earthlight (France). You can access the entirety of his results via our sortable data available here.

A table containing all the significant changes in TRC Global Rankings for Sires during 2019 can be found underneath.

Juddmonte Farms – the international breeding operation of Prince Khalid Abdullah – has a couple of bright prospects in Kingman and Bated Breath, while Coolmore Partners are lining up a good team of progressive producers via No Nay Never, Declaration Of War, Australia and others. Regulars in this table include Zoustar and Lord Kanaloa. 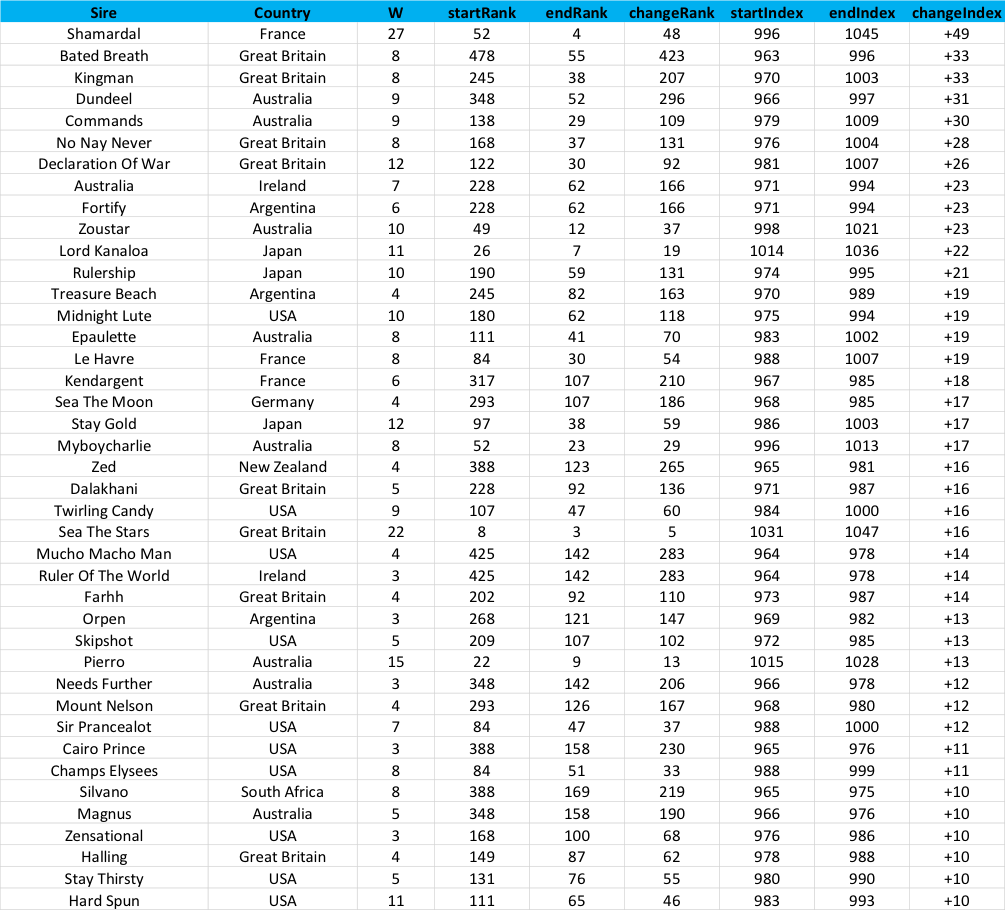