With the year drawing to a close, it is time for our annual review of the movers and shakers in each category of TRC Global Rankings. This week is the turn of the jockeys.

Jockeys with the most Group/Graded wins 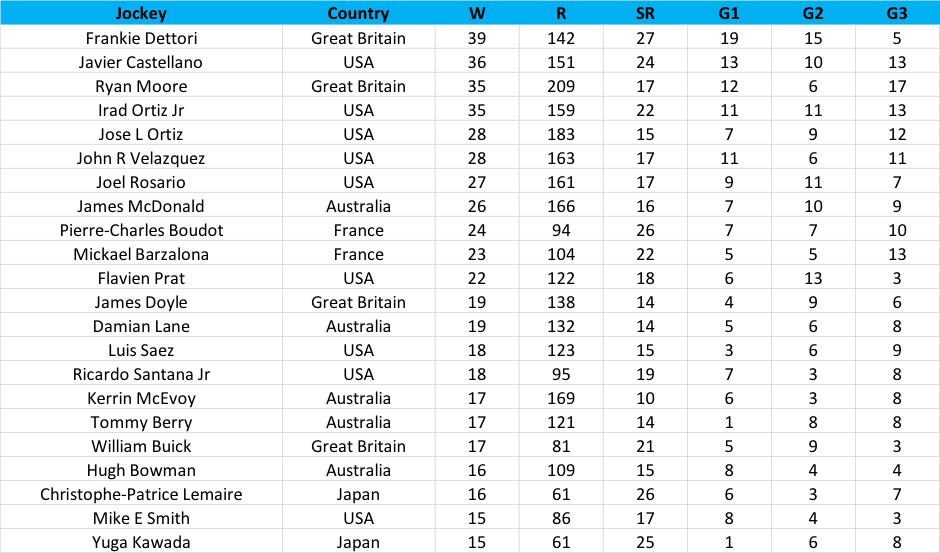 There is no doubt that 2019 was the year of Frankie Dettori in the saddle. The 49-year-old reached TRC world #1 for the first time since our rankings started in 2014. His 39 Group/Graded wins lead the planet, as 19 G1 wins and 15 G2 wins. And the vast majority were earned in the competitive arena of top European races via his partnership with new world #1 trainer John Gosden.

Ryan Moore was great by everyone else’s standards, but strictly average by his. This is why he slipped somewhat during the campaign, but this is only a result of regression to the mean.

He and trainer Aidan O’Brien could not continue the rate at which they were winning Group races two or three years ago – but they have every chance of repeating the volume with the string at Ballydoyle increasing in strength by the season. It should be interesting to see whether Moore returns to #1 in 2020, especially as he has renewed his association with top Japanese connections of late.

In the U.S., it seems that time has finally caught up with Mike Smith. Well, that and the withdrawal of support from trainer Bob Baffert on some of his leading horses. Smith still clings to the top spot in the U.S., but it won’t be for very long because Joel Rosario is king in waiting.

In Australia, a raft of world-class riders render the major races unmissable. James McDonald and Kerrin McEvoy were the tops, while it was no surprise to see Hugh Bowman slip back a bit in the aftermath of the great Winx. Bowman is the still the Australian #1 on our figures, but Kiwi McDonald is closing him down by the month.

In France, Pierre Charles-Boudot continued his progress and looks more and more like a superstar, while Mickael Barzalona enjoyed a very solid campaign too.

by change in Performance Index (+15pts or more) 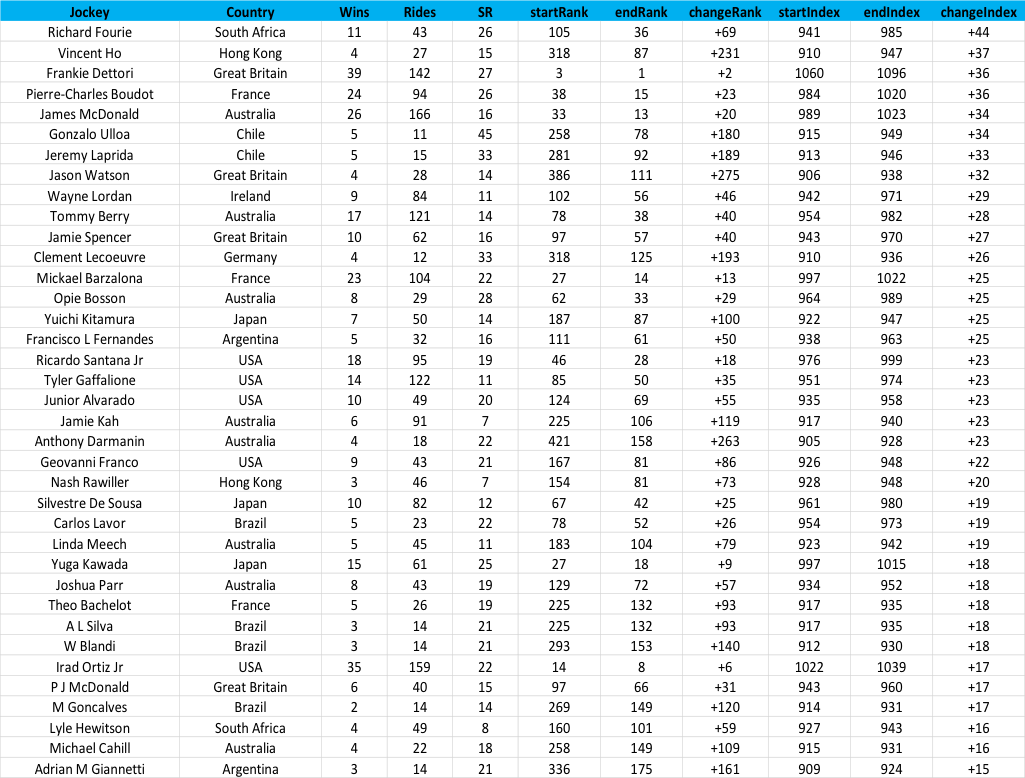 South African Richard Fourie earned the accolade of the biggest mover of 2019 with a stellar campaign in his country’s top races, winning on 11 out of 43 rides at an excellent 26 per cent clip. The highlight was the G1 Durban July on Do It Again. He currently ranks #2 in the nation behind the great Anton Marcus.

Note carefully here the presence at the top of this analysis of Vincent Ho in Hong Kong and Jason Watson in Great Britain. These two are highly promising.

It is encouraging to see two female riders included, in Jamie Kah and Linda Meech (who is narrowly the world’s #1 female rider at present – at #104). Australia (and New Zealand) lead the way in providing opportunities for women to show that they are at no disadvantage whatsoever on the back of a horse.

We will let the data speak for itself. A couple of notes: ‘Country’ is not the nationality of the jockey, neither is it where he or she calls home. Instead, it is the country where the jockey had the most rides in Group/Graded races.