In the second part of her series on Prairie Meadows race course in Iowa, where one of the big racedays of the year takes place tomorrow, Alicia D. McQuilkin examines facilities at the track, discovers what it is doing for the safety of horses and handlers, and looks at what the future may hold for the operation.

As long as I’ve been following racing more than as a casual fan, I’ve heard grumblings about Prairie Meadows needing to step up their efforts for the racetrackers. While I intend for this series to be neutral, I was pleasantly surprised to see how fresh the backside facilities seemed. While there wasn’t much happening on my tour in early April, the backside having opened earlier in the week, the staff I interacted with was friendly and helpful.

The barns were all in good shape and appear to have relatively new metal siding and shingles on the roofs. Each exterior stall has a window, the 27 barns each have a capacity of 52 horses and there are several offices and spaces for feed and tack (all with the capability of being locked) in each barn. There are sandy round pens between several barns. There is an abundant number of walkers and industrial-sized ice machines (for icing legs), all free for use.

Horse paths with track surfacing run alongside cement avenues, providing cushion and to prevent slipping when it’s wet, which happens plenty in the spring.

On the west end of the barns, a covered six-horse exerciser is available for a small fee. Primarily this is to accommodate horses coming off a lay-up and in need of exercise without a rider, or horses who simply could use a change of routine.

In addition to the one-mile oval of the main track, a not-quite-five-eighths-of-a-mile training track is just south of the barns. This track has human recreation space in its infield for volleyball, baseball, etc. There are three dormitories, which have the capacity to house about 150-200 workers, and last season the backside track kitchen was reopened.

This year Prairie Meadows installed a new inner safety rail (Rider Protection System®) on the main track, and a new track surface; the sand, silt, and clay (around 88/6/6 percent) sourced from within the state was chosen to provide adequate drainage.

The infield pond was also dredged this year to excavate surface that had run off the track, and new grass is being planted for beautification around sections of the outer rail.

The saddling paddock surface is entirely rubber ‘bricks’, and there are stalls behind the main saddling area, away from the crowd for horses that need less bustle before the race, or for the ponies and outriders to wait.

A horse path runs from the barns to the main track with a high chain-link fence woven with artificial greenery to insulate the street noise and block the view of cars driving by. Between the horse path and the main road is a private drive for trainers and owners to quickly get from the backside to a private parking lot near the saddling paddock without battling traffic.

For racegoers, Prairie Meadows has an expansive parking lot with a trolley that picks up patrons in the far lots. 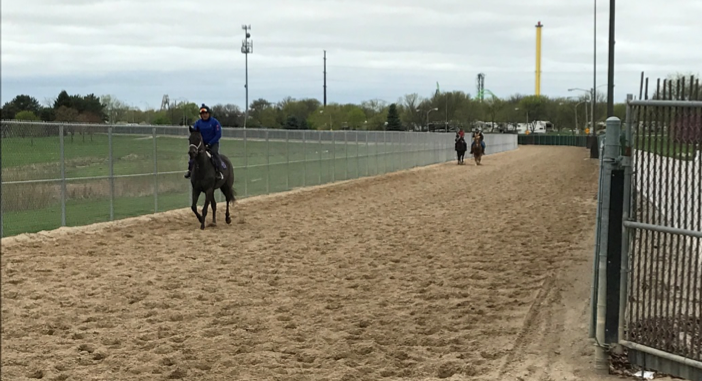 As someone who fell in love with racing because of the horses, safety is a paramount concern for me. Derron Heldt, Director of Racing at Prairie Meadows, stressed that they put a lot of consideration into the safety of the horses and their handlers. The track crew starts at 3am every day, preparing the training and main track to open at 6am, and the grounds team stays on year-long, doing touch-ups, repairs, and upgrades during the off-season.

During a morning event for the Prairie Meadows Race Club, attendees were able to watch the starter and assistants work with horses behind the gate. In explaining what they do every morning and why, the starter said he has notes on every horse that has started at Prairie Meadows, dating back years. Every horse is required to school at the gate before it races, and starters will share their notes between tracks, improving everyone’s safety, especially the humans inside the tiny chute.

Safety extends to backside security. Anyone entering the backside must be licensed or accompanied by a state licensee, and the security checkpoint is the only entrance.

Three state veterinarians are staffed, there is a testing barn at the edge of the end of the path returning from the track, and any horses that have a fatal accident or die unexpectedly are sent to Iowa State University’s Veterinary Diagnostics for necropsy.

While Iowa hasn’t formally adopted National Uniform Medication Program policies, a bill was passed this spring and signed by the governor to bring furosemide use closer to the standard. HF568 is in effect, requiring third-party administration since the beginning of the meet. This progress is certainly late, considering Iowa was one of the first states to ban use of anabolic steroids in post-race samples — about a decade before the 2008 reformations following the Big Brown controversy.

Iowa’s medication rules are in line with the suggested best practices that ARCI (Association of Racing Commissioners International) and RMTC (Racing Medication and Testing Consortium) set forth. In fact, most of Iowa’s regulations on NSAIDs (non-steroidal anti-inflammatory drugs) are more stringent than the national recommendations. All allowed NSAIDs (flunixin, ketoprofen, phenylbutazone) must be discontinued 48 hours before racing; for comparison, RMTC’s guidelines suggest 32 hours’ withdrawal for flunixin and 24 for the other two.

Iowa does have a higher allowance for bute at 5 micrograms per milliliter (5 ug/ml) of serum, versus 2ug/ml. Stacking isn’t allowed, and, if more than one NSAID is found in a post-race sample, the allowable limit is drastically lower than the standard (1ug/ml for bute, 3ng/ml flunixin, 1ng/ml ketoprofen).

Any horse running on a given day must have the ‘In Today’ sign outside its stall with furosemide dosage (if applicable), and access to the stall and horse are controlled to eliminate any tampering with the horse or cross-contamination.

Only the groom and trainer - or a representative authorized with the IRGC (Iowa Racing and Gaming Commission) - are allowed with any horse in the testing barn. Here they’re allowed to be cooled down and bathed before samples are taken.

The testing barn at Prairie Meadows has many security measures in place to control the people in the testing barn and to maintain the security of samples before they arrive at Iowa State University’s Veterinary Diagnostics Lab.

Last spring, Prairie Meadows worked with ISU and the state Department of Agriculture to establish tighter regulations on biosecurity.

Several horses that shipped in before the meet started had been occupying the same barn as a confirmed EHV-1 (equine herpes virus) horse at Fonner Park in Nebraska. While none of these horses that shipped in tested positive, the protocols implemented kept them separated from any others shipping in or training in an effort to not disrupt trainers’ plans to ship in as other meets ended.

As a strongly animal agriculture state, both ISU and Iowa Department of Agriculture are well-versed in highly contagious outbreaks and disease prevention.

It also shows the well-knit relationship that Iowa State’s College of Veterinary Medicine has with Prairie Meadows. As one of the top-rated veterinary schools in the country, with a state-of-the-art large animal hospital opened in 2009, it’s certainly a valuable asset to have less than 40 miles away.

The biggest weekend at Prairie Meadows in both purses and national prominence is the Iowa Festival of Racing.

It has usually taken place the final weekend of June or the very beginning of July. This year it was July 6-8, with one G3 each night: the Iowa Oaks on Thursday, the Iowa Derby Friday, and the Cornhusker Handicap Saturday evening.

Nationally known horses are recruited and top jockeys pilot them. My personal highlight of Iowa Derby night was getting a high-five from Mike Smith, even more than the money I made on a 45-1 shot the race before.

This star power is a big deal for fans at a small track, especially the youngest.

Compounded by the excitement of being so close to the outer rail and the winning jockey walking right by you on the path between the apron and the track, it makes for a fun night and an easy way to get new fans hooked. Certainly not an opportunity you get at every track. 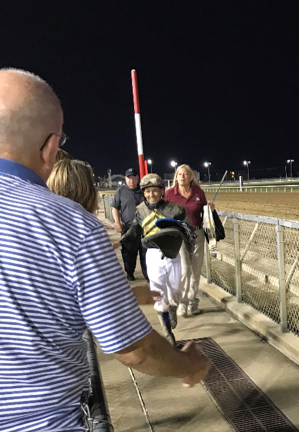 Iowa Classic Night is held towards the end of Prairie Meadows’ Thoroughbred season to celebrate Iowa’s best homegrown racehorses with stakes exclusively for Iowa-breds. This year’s event is tomorrow.

There are seven stakes on the card. With Iowa-bred races that are carded throughout the season to build up to this final big weekend, all the horses should be primed for their best efforts. It’s a fitting send-off before horses ship out for other tracks or a freshening.

The final questions I asked addressed the future of racing in Iowa and the place of racinos.

Heldt said racinos can be an integral part of making racing successful when operated in a sustainable manner and it has been shown they can work well. In regards to Iowa racing’s future, it comes down to advertising the great supplements available and recruiting both mares and stallions to the state.

I am inclined to agree on both outlooks. Racinos can be sustainable when operated with the knowledge that someday the revenue may be desired by other groups, and that quality racing must be maintained and promoted.

Racing across the country is facing the same obstacles, and all stakeholders and fans have a role to play in promoting the sport. State programs are great incentives for newcomers, but organizations need to stay committed to advertising and not become discouraged that everyone is climbing the same mountain.

In the next instalment, I’ll recap interviews I conducted with Iowans who breed, race, and/or train in their home state. They’ll reveal what Iowa’s racing and breeding incentives mean to their business model, and what they’d like to see happen to continue growing racing.