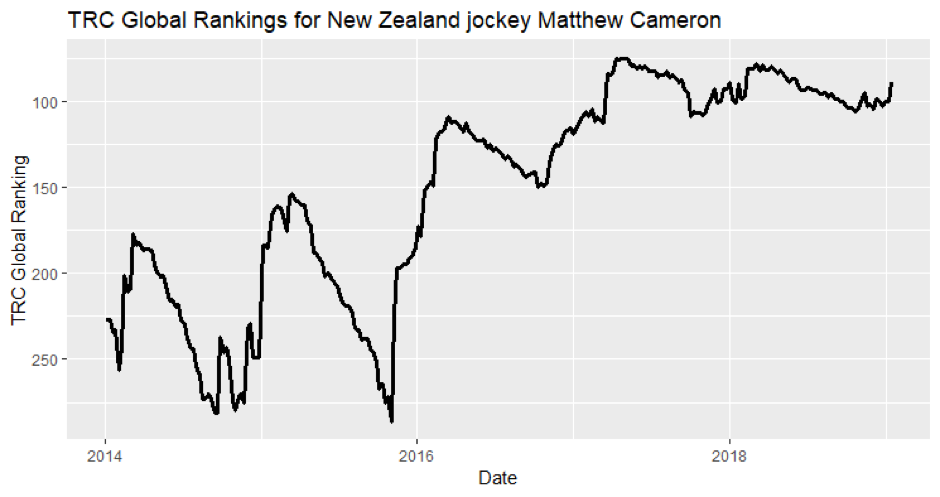 Madison County, a son of Pins (+5pts, #211 from #321) has now won two G1s in a row, having landed the New Zealand 2000 Guineas at Riccarton in November. He is entitled to be regarded as the country’s best 3-year-old and did well to overcome some trouble on his latest start.

Cameron has been a fixture in the world’s top 100 riders. He broke through in March 2017, and has rested in the hierarchy for 71 weeks in total. His highest ranking is world #75, achieved for four weeks in April and May 2017. He is trending back in that direction.

The most significant mover among owners is Japanese concern SILK RACING CO LTD (+4pts, #20 from #25) whose Glory Vase won the G2 Nikkei Shinshun Hai at Kyoto on Sunday. This is Silk’s highest-ever ranking, largely powered by their best runner, the Japanese Horse of the Year Almond Eye, who is on target for a race on Dubai World Cup day at Meydan.

Dubaian trainer SATISH SEEMAR (+11pts, #222 from #376) has distinguished himself as a trainer to be reckoned with. He is best known for his work with 2013 G1 Golden Shaheen winner Reynaldothewizard, but latest projects North America (G2 Al Maktoum Challenge) and Raven’s Corner (G3 Dubawi Stakes) are adding to his body of work by the week.

Seemar tells Laura King here about one of the secrets of his success, but, strategically, he seems very adept at pointing horses at key races at Meydan, ably assisted by nephew Bhupat.

Seemar has ranked in the world’s top 150 11 times, most recently in April 2015. With his two best horses in great shape, we would not bet against him returning to – or even surpassing – that standard.

That Dubawi and Frankel gain no points provides evidence as to how our rankings work. If the system learns nothing new about a competitor – maybe he or she beat a small field, or won a weak race, or has volatile prior performance – the system evaluates the information gain at zero.

An extreme example is provided by jockey Javier Castello (no gain, stays #11) this week. Castellano actually rode the winners of two races, the G3 Marshua’s River (8 ran) and the G3 Tropical Turf (7 ran), both at Gulfstream Park in Florida, but the TRC algorithm has a vast amount of data on him (528 races, second to Ryan Moore among top jockeys) and does not want him to be any more in front of jockeys Flavien Prat (-1pt, stays #13), Irad Ortiz (-1pt, stays #14) and Florent Geroux (-1 pt, stays #16) all of whom are relegated this week.

TRC Global Rankings are optimised to make the best possible predictions of future races, where the ‘cost’ of a mistake – a lower-ranked rival defeats a higher one – is considered proportional to the difference in ranking points between them. We go to great lengths in research, development and testing of the algorithm to make the system work better and better. As more data comes in – and we have details only since 2011 for all counting races in full – the system is able to run back tests in more depth.

We will publish more details of our predictive analytics in the next few weeks.