The last time we produced a list of the world’s top-ranked young jockeys (nearly two years ago), the top three places all belonged to America. Indeed, there were seven U.S.-based under-25-year-olds in the top 200 of the TRC Global Rankings. Alas they have all since matured past the threshold, and now there is only one.

That distinction belongs to the Puerto Rican Manny Franco, who is the third-highest ranked under-25 riding in world Thoroughbred racing, behind UK-based Irishman Oisin Murphy and Ireland-based Irishman Donnacha O’Brien, as the table below shows. 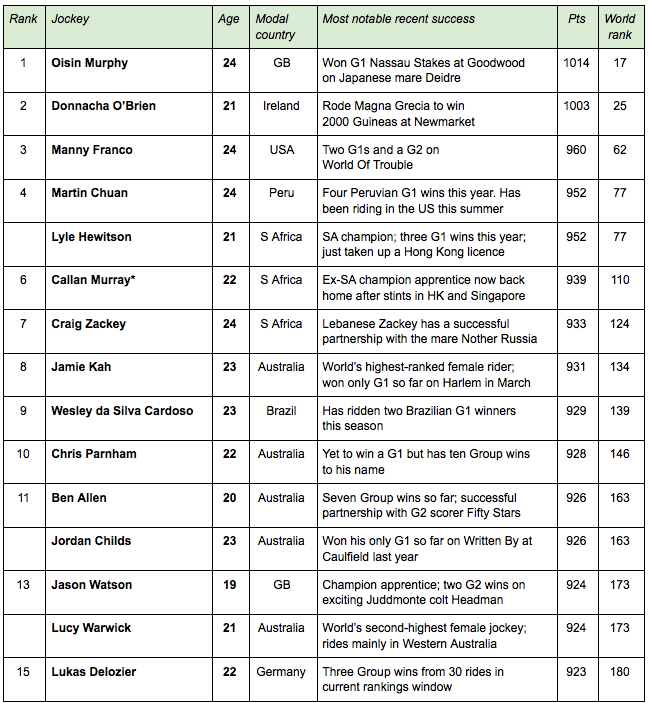 Murphy, 24, ranked fourth last time, although we included 25-year-olds then and he would have been third behind the Ortiz brothers (also Puerto Ricans) had we not done so, as US-based Frenchman Flavien Prat, then joint-second with Irad Ortiz, was already 25.

Murphy had a world ranking of 35 when we compiled that previous list, but he is now firmly established in the world elite, alongside the likes of the Ortiz brothers and Prat, and not just because of his famous partnership with the ill-fated Cartier European Horse of the Year for 2018, Roaring Lion. He is consistently in demand all over Europe and the Far East, and has the advantage of having ridden in 356 Group/Graded races worldwide in the current three-year window of our rankings.

O’Brien, who had already started to make a mark last time (he was world #75 back then), has also soared in the past two years with Classic victories in the Newmarket 2000 Guineas (Saxon Warrior and Magna Grecia for father Aidan), one in the Irish Derby (Latrobe for brother Joseph), one in the Epsom Oaks (Forever Together for Aidan). He has had 244 Group/Graded mounts in the last three years.

In all there are 15 under-25s in the top 200 (there were 19 two years ago). The new list contains two women - both Australians: Jamie Kah, who gained four points last week after a G2 win at Moonee Valley to climb 20 places to #134; and Western Australia-based Lucy Warwick, who is tied with Jason Watson at #173. She has had 29 qualifying rides in the current three-year window.

If this list had been produced last week, it would have included three other riders: Americans Drayden Van Dyke (current world #27) and Tyler Gaffalione (#55), and Ireland’s Colin Keane (#94). But Van Dyke’s 25th birthday was on Tuesday, and Gaffalione and Keane are 25 today.