TRC Global Rankings combines the volume of a trainer’s success (considering how difficult that volume was to accumulate) with efficiency. We compare all competitors in a single category with each other using a massive network over which mathematical computation of a performance hierarchy is well defined.

For all these reasons, the year of 2019 was that of Newmarket trainer John Gosden. He won only the fifth-most Group races, but 15 of the 32 were at G1 level and his strike rate was a phenomenal 28 percent. Gosden reached #1 in our rankings for the first time in the TRC era on August 4 and has held sway for the 21 weeks since.

Currently ranked #2 is the most prolific trainer in the world, American Chad Brown. Brown led the world in wins by a clear margin with an outstanding 54 strikes, the majority of which came in the east of the country, including 20 at G1. With Bob Baffert experiencing a down year by his standards, Brown is now his country’s undisputed #1.

While Gosden and Aidan O’Brien do battle for supremacy in Europe and Brown and Baffert dominate their respective coasts Stateside, it’s Chris Waller and James Cummings who vie for the top spot in Australia. We have world #7 Cummings over #9 Waller by just 2pts in our current numbers, the former having a clear edge in strike rate (14% to 11%) and in head-to-head encounters, and the latter posting greater volume (41 wins to 37).

It’s worth nothing that 2019 was the best year of British trainer Mark Johnston’s career in Group races. Oh, and he also broke domestic records across the boards during the year, setting new marks for career and annual winners. 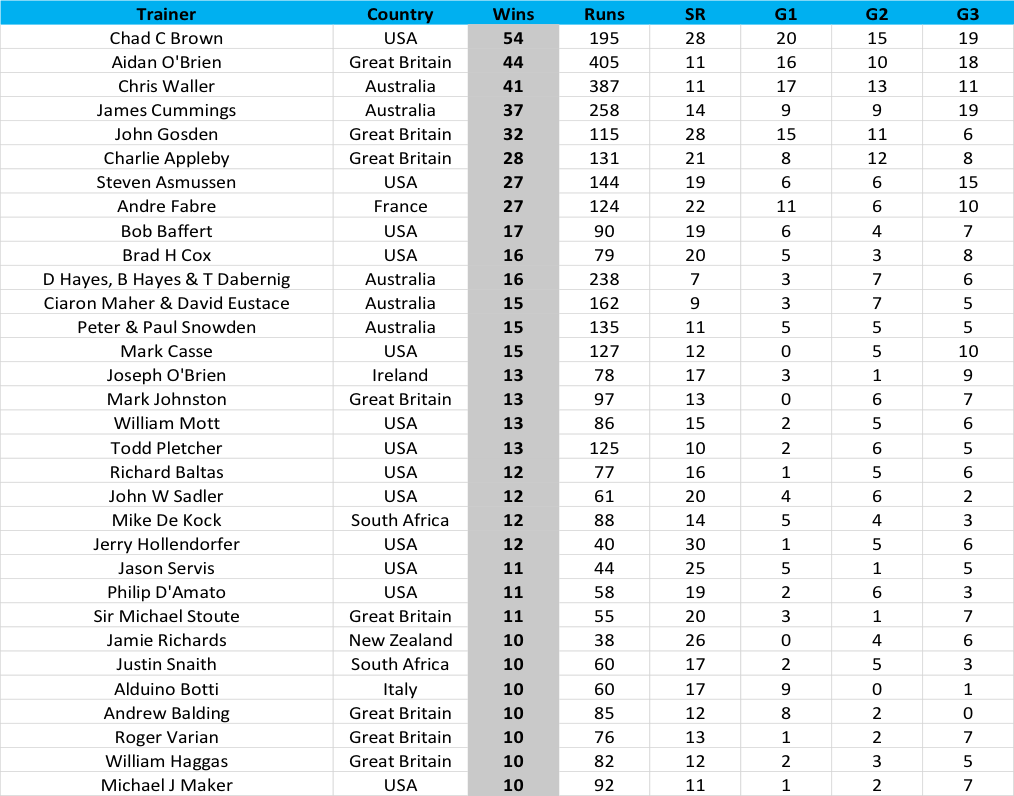 It is with no surprise whatsoever that TRC Global Rankings can name Irish trainer Joseph O’Brien as the biggest climber in his profession’s ranks in 2019. Already the winner of the 2017 Melbourne Cup, Aidan’s son – a former world #1 jockey – advanced his career with a training license no end with 13 wins from 78 runs,

O’Brien’s progression up the charts recalls that of another well-related handler, the aforementioned Cummings, grandson of the legendary Bart.

Amazingly, Cummings (+34) and O’Brien (+29) finished first and second in the same report as this one which we compiled two years ago. It’s worth reviewing those numbers here.

This year, O’Brien gained a further 45pts in Performance Index while Cummings earned a raise of 20pts and made mid-division in Table 2. Remember, the larger a competitor’s Performance Index, the harder it is to gain points because our rankings are a prediction of performance in the near future.

Cummings – this week’s world #7 – and the younger O’Brien – now up to #24 – are two outstanding trainers who likely will be found at the very top of the rankings within the next decade. And, as if Aidan and Joseph don’t provide their family with enough firepower, it was recently announced that Joseph’s younger sibling Donnacha is to quit the saddle to join the in the training ranks next year. Look out, world. 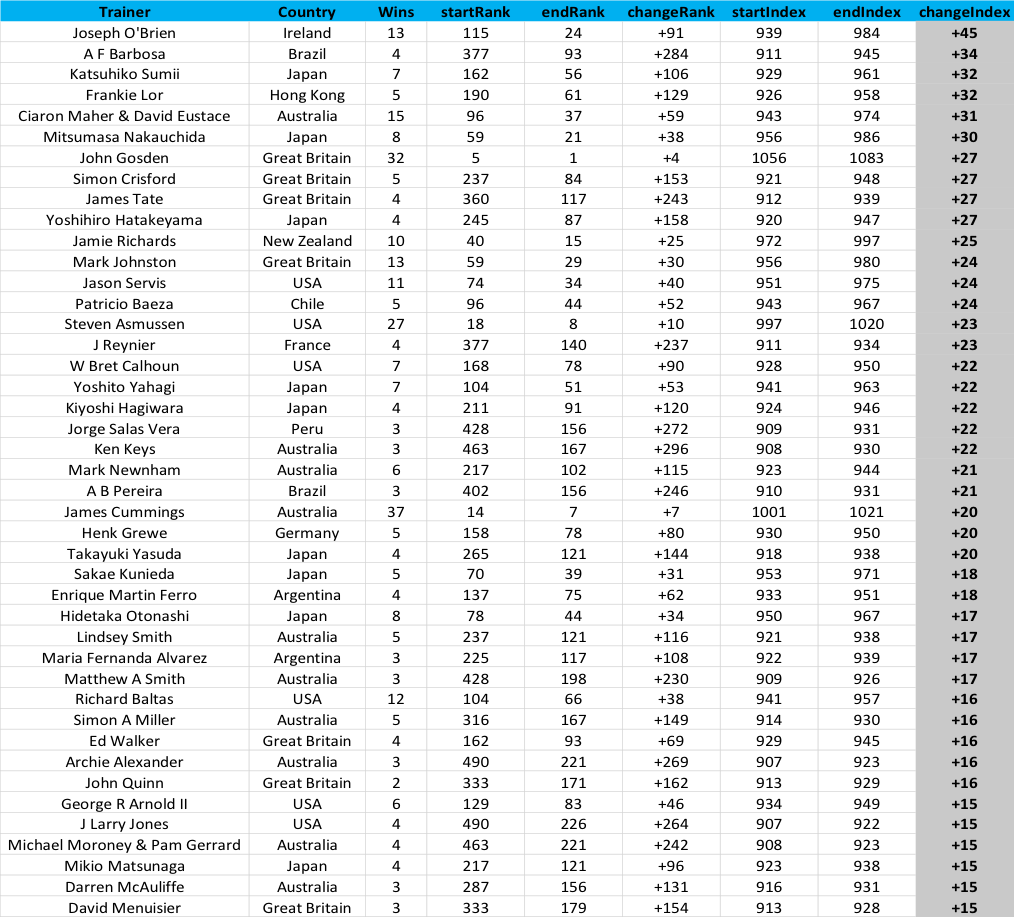 This category is by far the most volatile because most owners – save for the sport’s superpowers – have relatively few representatives, certainly compared with jockeys and trainers. So, TRC Global Rankings tend to be more conservative in elevating an owner to the upper echelons of the charts.

By and large, it is the same names we find year after year in the top few slots: the current top four of Godolphin, Coolmore Partners, Sheikh Hamdan Al Maktoum and Juddmonte Farms / Prince Khalid Abdulla being among a handful of these mainstays.

You will probably know that, while these four have runners all over the world, their powerbase is European. But the times they are a-changin’, and, as we and others have predicted for some time now, for the new global titans of the game, we need to look to the East.

Before we expand on that, let’s aggregate the wins gained in the year so far, in order to underline that the distribution of wins among global owners is very much top-heavy: 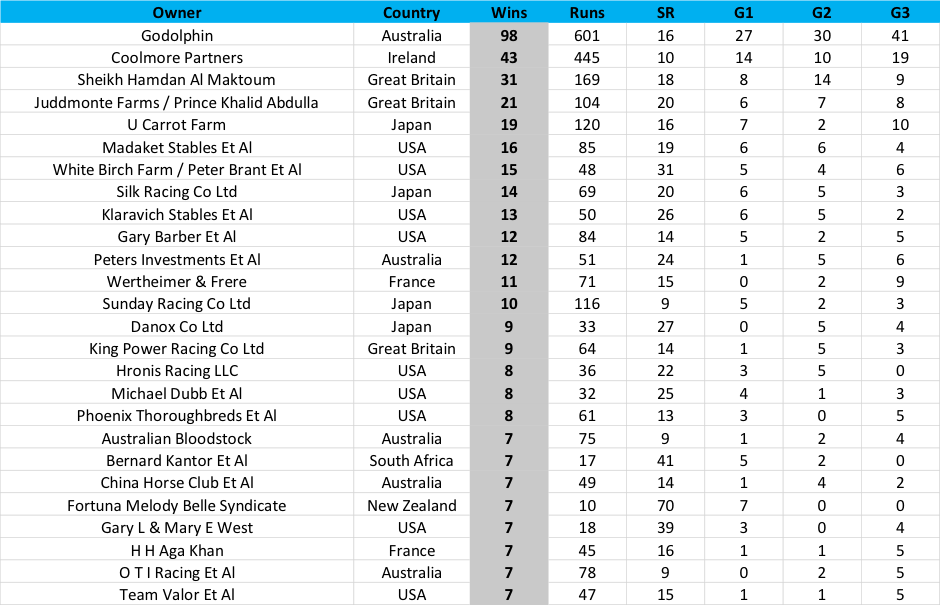 A total of only 13 distinct ownership concerns – at least as we define them – had ten or more wins. No surprise! The top four by wins are the top four in our standings, already mentioned. Beneath them are some of the top U.S. operations, but then comes evidence for the point we are driving at here: U Carrot Farm, Silk Racing Co Ltd, Sunday Racing Co Ltd, Danox Co Ltd - the major Japanese operations who together had a breakthrough year on the international stage for their country.

Now, you may be thinking at this stage ‘yes, but this is an overnight success 30 years in the making’ and you would be right, for Japan has long since sowed the seeds of this harvest with a rational approach to their breeding system, featuring, as it does, a heft of well-bred horses who gallop and stay and were sound.

Take a look now at the year-to-date movers in the Owner category, to further underline the rising tide in the East: 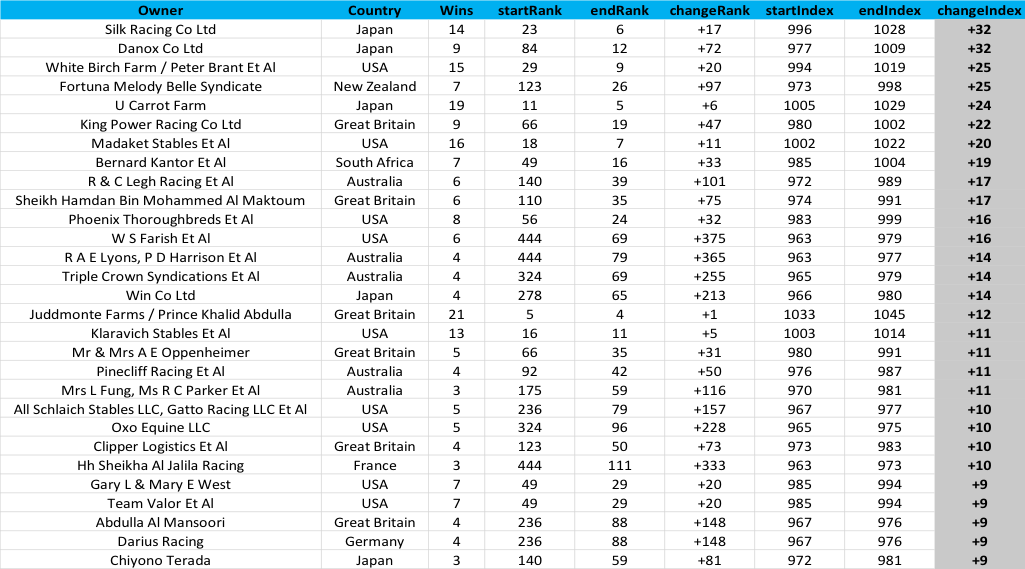 Now you can see it clearly: it isn’t that the major Japanese operations already listed have merely continued the trajectory of their success. No, the gradient has steepened markedly. Japanese owners rank #1, #2 and #5 in the magnitude of the change in their Performance Index.

Otherwise, the year’s top movers have a cosmopolitan look. You can pick out any trends you believe in, but a lot of noise is attached to any signal, and we really need information exogenous to that used to calculate our numbers to be sure that any change – forwards or backwards – in the Owner ranks has real momentum.