Newmarket trainer Luca Cumani, a globetrotting pioneer of the racing world and two-time G1 winner in Hong Kong, has ably tutored many a past employee and, it seems, instilled in them a penchant for travel. 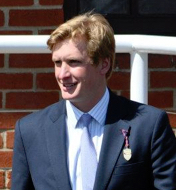 Ed Walker (photo: edwalkerracing.com), now training in his own right and who brings Stormy Antarctic to Sha Tin to take on hot favourite Rapper Dragon and five others in Sunday’s G1 Champions Mile, is such a man. And he brings with him stable assistants Jack Steels and Deepak Gaikwad, who were also formerly employed at Cumani’s Bedford House Stables.

Walker, who will be an usher at Henson’s July wedding, will also have the opportunity to catch up with Hong Kong trainer Richard Gibson, for whom he worked before joining the Cumani team.

The 33-year-old, whose grounding also included a stint with Roger Charlton, quickly embraced the travel mode after he began training - in his own right - in October 2010.

He won a listed race at Kempton with his first runner, Riggins, who then ran in Dubai just two months later, which, remarkably enough, was his second starter anywhere. “Well, I only had the two horses when I started … Riggins and the lead horse,” he explained, “and that wasn’t such a bad way to begin as the only way was up.”

And up it’s certainly been for Walker, who then won a stakes race in France with Red Gulch in the first full calendar year of his training career and has since also campaigned horses in Italy, Australia and the USA, highlighted by winning the G3 Lexus Stakes (2013) at Flemington with Ruscello and having Mutatis Mutandis G1 placed at Belmont.

“Luca might have given us all the travel bug,” said Henson. “His own travelling was extensive and I think he’s won Group 1 races in ten different countries.”

It is certainly a consistent theme. Others from the Cumani school who’ve made an impact travelling abroad include Marco Botti and Christophe Clement, not to mention his own children Francesca and Matt, who have moved to Australia - the former a television racing presenter and the latter training at Ballarat in Victoria.

Trainers James Toller, Jonathan Portman, Chris Wall, John Berry and David Simcock are others to have spent time with Cumani.

Walker has certainly followed suit. He ventured to Melbourne in 2007, when the Cumani-trained Purple Moon was agonisingly beaten into second place behind Efficient in the Melbourne Cup. “That was just a holiday, but it gave me a taste for it and it was amazing to return there in 2013 with Ruscello. It didn't work out for him in the Cup, but it was great to win the Group 3 with him on Derby day at Flemington,” he said.

That relationship began when Siu purchased a horse named Glorious Empire from Walker’s yard. Re-named Quaternion Eagle, he won at 77-1 at his first start in Hong Kong, at Sha Tin, in April 2015.

“We’ve since prepared a number of horses for Mr Siu, and to have his support has been wonderful. Obviously, you know you’ll lose them if they qualify for Hong Kong but that’s okay,” Walker said.

Walker is naturally looking forward to Sunday’s race and discounts the notion that his horse is exclusively a wet-tracker. “We haven’t gone hunting soft ground with him. It’s more been coincidence and he’s run very well on top of the ground. Mind you, I wouldn’t be unhappy if it continued to rain as that might take the edge off a few others,” he said.

The trainer will also employ blinkers for the first time on the 4-year-old colt. “We hope this will aid his concentration and focus. Jamie [Spencer] rode him at Doncaster and felt he just switched off after getting to the front and he was grabbed in the last stride,” he said.

“The lads tell me he’s done very well through the week and he looked good, to my eye, this morning,” said Walker, who arrived in Hong Kong on Wednesday afternoon.

Assistant trainer Steels has been riding the horse this week as Gaikwad sustained a fracture in his lower arm after being thrown from Stormy Antarctic before his departure.

“It’s okay. I usually ride him, but Jack also knows him really well and we’ve worked together quite a lot from the time we were both at [Luca] Cumani’s,” Gaikwad said.

A first-five finish on Sunday would be enough to better the team’s old boss, Cumani, whose one Champions Mile runner was Presvis, beaten 1¾ lengths into sixth, behind Xtension, in the 2011 edition.