Anybody who regularly takes more than a quick glance at the TRC global sires’ standings will know the industry is dominated by the Big Four stallions.

Galileo, Dubawi, Deep Impact and Tapit stand head and shoulders clear of the rest - and have done for more than three years. They are also the four most expensive sires anywhere, and their results show why.

Tapit is a little adrift of the other three, mainly because most of his progeny race on dirt, and there are many more Group and Graded races worldwide on turf. (We believe, incidentally, that he has the potential to compete with the other three on turf should he be given the chance.) But he is still significantly ahead of the chasing pack.

Right now you might be surprised to see which stallion has emerged as the leader of that pack. Because just 18 months ago Not A Single Doubt, who has just climbed to #5, wasn’t even in the top 100.

The 15-year-old son of Redoute’s Choice had such a successful time in 2016, though, that he was the second-highest climber in the rankings worldwide over the 12 months, gaining 31 points and moving up from #139 to #28 by December 31. 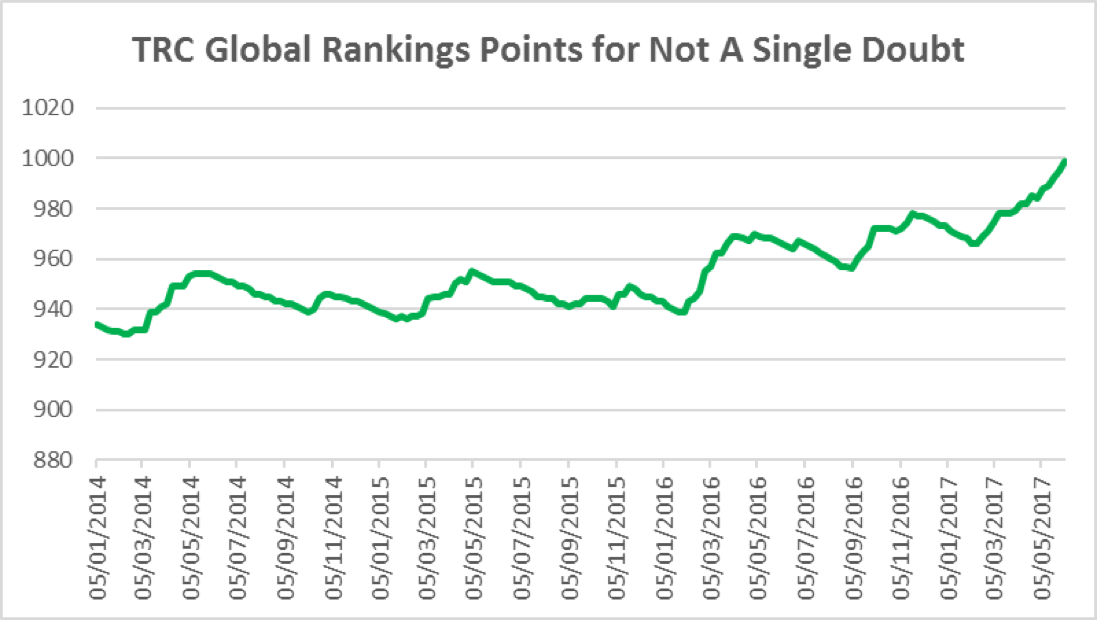 Well, the news is he hasn’t stopped. Since then, the Arrowfield Stud stallion has just gone on climbing. And at some trajectory (see the graph alongside). He has gained a further 25 points, and now only the Big Four are ahead of him. He was #7 in the Australian list at the start of the year. Now he is #1.

Of course, Not A Single Doubt is unlikely to hold onto that #5 slot for long with the Aussie season winding down and the big guns in the North, like Curlin, Uncle Mo, Medaglia D’Oro and Sea The Stars, poised to challenge. But expect him to push on again from September. He has proved himself to the TRC algorithm, and is indeed a stallion to be taken very, very seriously wherever his progeny race.