There are just seven weeks to go before day one of The Championships, the lavish, A$20 million extravaganza in Sydney that has quickly established itself as one of the major race meetings in the world. The likes of Winx, Redzel, Hartnell and Chautauqua will inevitably grab the headlines, but one of the races with considerably less international profile - and at least as much local popularity - has just received a major boost.

Following the successful partnership between Newhaven Park Thoroughbred nursey, the Australian Turf Club and Racing NSW in 2017, Newhaven Park has announced it will remain the named sponsor of Country Championships Final for the next three years.

The race is the culmination of the Country Championships series, beginning this Sunday, which offers $1.6 million in prize money and was developed to include horses trained in country areas in the Sydney Autumn Carnival.

The series, which commences on Sunday at Port Macquarie, includes seven qualifying races worth $150,000, a Wild Card race of $50,000 and the $500,000 Country Championships Final at Randwick on Saturday, April 7.

“It is just awesome! The country championships fairytale captures the hearts and minds of all racing people. It gives grassroots racing folk a chance to compete on the biggest stage. We just wanted to be a part of it!” said John Kelly, of Newhaven Park.

Kelly's family will be hosting a cocktail party for all competitors and connections at their famous watering-hole, the Doncaster Hotel at Randwick, on the eve of the final, which is on a card also featuring the A$3m Star Doncaster Mile, the A$2.4m T J Smith Stakes and the $A2m BMW Australian Derby.

The 2017 Country Championships Final saw enormous support from all corners of New South Wales and succeeded in bringing the heart of country racing to the city. The final was won by the $31 outsider Free Standing in a fairytale victory for trainer Cathleen Rode.

Newhaven Park is one of Australia’s leading Thoroughbred nurseries based in Boorowa, NSW and is ran by the fourth generation of the Kelly family. The stud farm is synonymous with the Golden Slipper, having bred four winners as well as being associated with an additional 17 individual winners or placegetters throughout the history of Australia’s famous juvenile race.

About the Country Championships 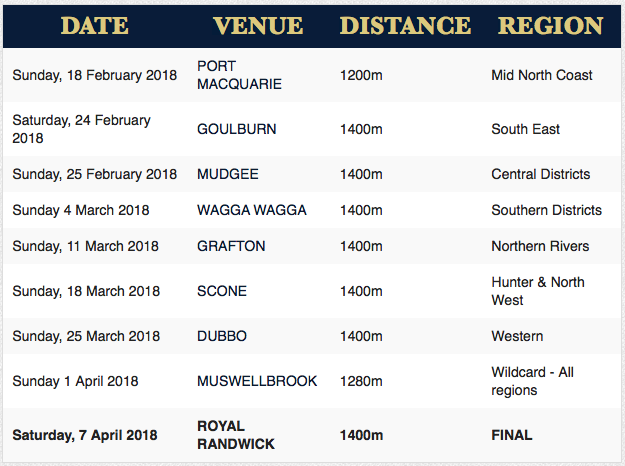