Who are the one percent of jockeys by income? Their names are familiar, though they’re not quite in the order that we’re used to seeing when we rank jockeys by their horses’ prize money.

For example, Mike Smith had the highest estimated income, nosing out Jose Ortiz, even though Ortiz topped the prize money list, where Smith was fifth. Ortiz’s horses won a third more money than Smith’s, but Smith took home a larger share of his horse’s winnings. That’s because Smith finished first in 26 percent of his races, while Ortiz finished first in just 19 percent. A first place finish brings the jockey ten percent of his horse’s prize money, while lower finishes get five percent at most.

What does it take to be a high-income jockey: the top one percent 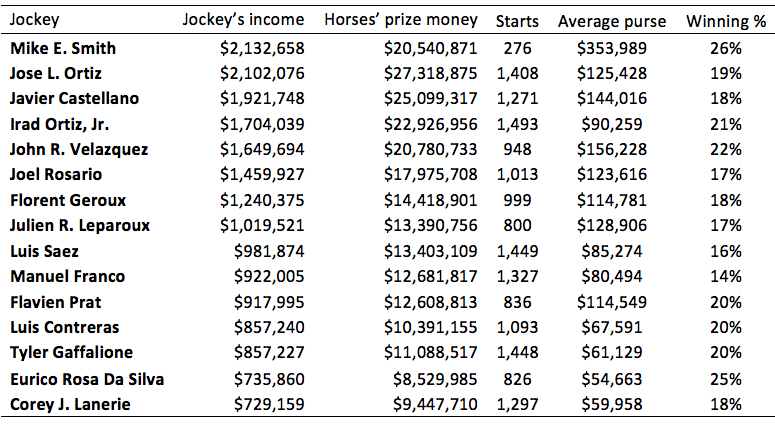 The number one thing that high-income jockeys have in common is that they start a lot of races. Except for Smith, every jockey in the top one percent started more than 800 races — more than two per day. Irad Ortiz, who earned the fourth highest income, started 1,493 races, more than any other jockey in North America. Out of the five jockeys who started at least 1,400 races, all but one made the top one percent of income.

If we go beyond the top 15 jockeys and look at all 1,559 jockeys who started races in North America in 2017, the relationship between starts and incomes is stark. It takes a lot of racing to make a decent living as a jockey. Among the jockeys who made more than $50,000, over half started more than 500 races. 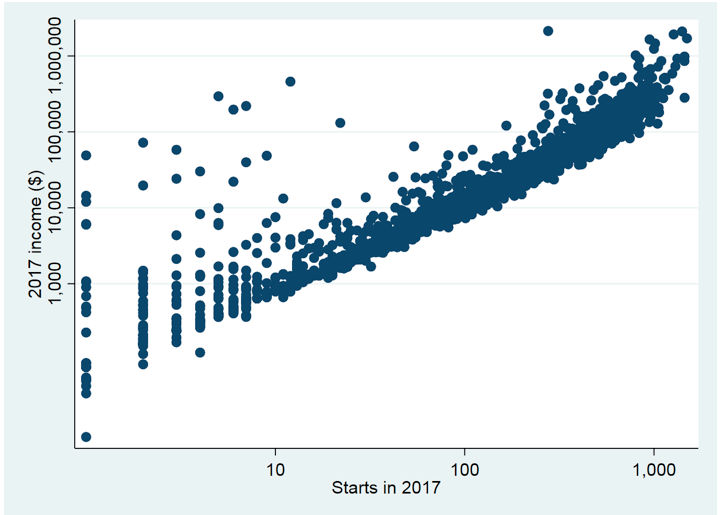 If you start over 500 races a year, you can’t be too choosy, but the races with larger purses offer more income potential. Among races started by the 15 top-earning jockeys in 2017, the average purse was over $100,000, while the average purse for all races run in North America was just $27,000.

Purse size was a key factor in Mike Smith’s earning the top income despite starting less than a third as many races as other jockeys in the one percent. Riding Arrogate, Smith started and won the world’s two richest races in 2017: the $10 million Dubai World Cup and the $12 million Pegasus World Cup. Because of these two outliers, the average purse size in Smith’s races was $354,000 — more than twice the average purse for other jockeys in the one percent. 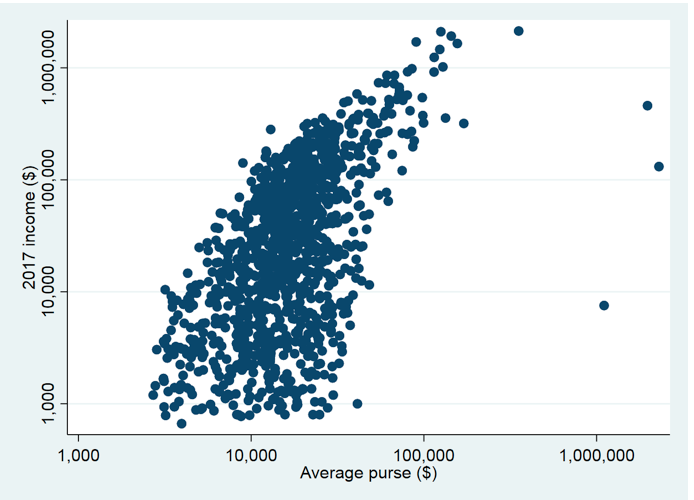 3. Finish near the front

It doesn’t help to compete for a large purse unless you earn a share of it. Mike Smith didn’t just compete in the world’s two richest races; he (and Arrogate) won both. In fact, Smith won over a quarter of his races — a higher percentage than any other jockey in the one percent. That’s the other reason Smith outearned other top jockeys while riding fewer races.

To get a share of the purse, you usually have to finish the race in the top four. Among jockeys with at least ten starts, those who finish a larger percentage in the top four do tend to have higher incomes. It’s a clear relationship. It’s just not as strong as the relationship between income and starts or income and purse size. 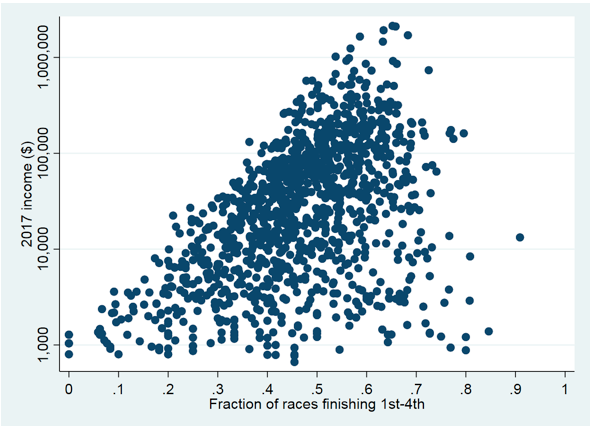 And do it in that order

What I’m saying here isn’t rocket science. In a sense, the factors that I’ve highlighted are obvious. But until I analyzed the data, it wasn’t obvious which factors mattered most. In predicting income, how many races a jockey starts matters 50 percent more than the purse size, and purse size matters 70 percent more than the fraction of races where the jockey finishes near the front.[1]

Jockeys like Mike Smith, with high incomes despite a modest number of starts, are very much the exception, not the rule.

And to say these factors are obvious doesn’t mean they’re easy to achieve. To start hundreds of races year, many with large purses, a jockey has to earn the trust of owners and trainers. And, despite starting two to five races a day, they have to avoid a catastrophic injury that can end their season or career.

None of that is easy to do.

[1] I reached this conclusion by comparing the coefficients in a multiple regression with all variables logged. I regressed the log of income on the logs of starts, average purse size, and the fraction of races where the jockey finished fourth or better.

How do so many jockeys survive earning so little? Read the first part of Paul von Hippel's analysis