Life is good if you’re an elite jockey. You ride the best horses in the best races, and you can earn a not-so-small fortune. But what of those at the other end of the scale? How do they fare? Here, in the first of two articles looking at the inequality issue among jockeys based in the U.S., Paul von Hippel, associate professor at the University of Texas, examines some key data. The second article is on Tuesday.

In a 1957 interview with Mike Wallace, Hall of Fame jockey Eddie Arcaro acknowledged he’d made about $2.2 million in his 25-year career — equivalent to about $30 million today.[1]

However, Arcaro said, “There are 950 active riders in the United States, and I think the average rider doesn't make a living … The average rider probably makes about $7,500 a year and, traveling with the family and everything, I actually don’t believe he makes a living.”

This isn’t exactly a secret, but it’s not something the racing business brags about, and it’s a little hard to figure out from published data. Unlike other sports — football, baseball, tennis, basketball — racing doesn’t disclose what its athletes earn. Instead of reporting what a jockey earns, racing reports how much prize money has been won by the horses under the jockey’s saddle.

In poorer races, or for finishing worse than fourth, the jockey gets a mount fee of $50 to $110. The amounts vary across states, depending on what the Jockeys’ Guild has agreed with each state racing association. But it wouldn’t be a great distortion to act as though the Kentucky agreement applies nationwide.

Under that assumption, we can approximate the cumulative distribution of jockeys’ income. It’s strikingly unequal. 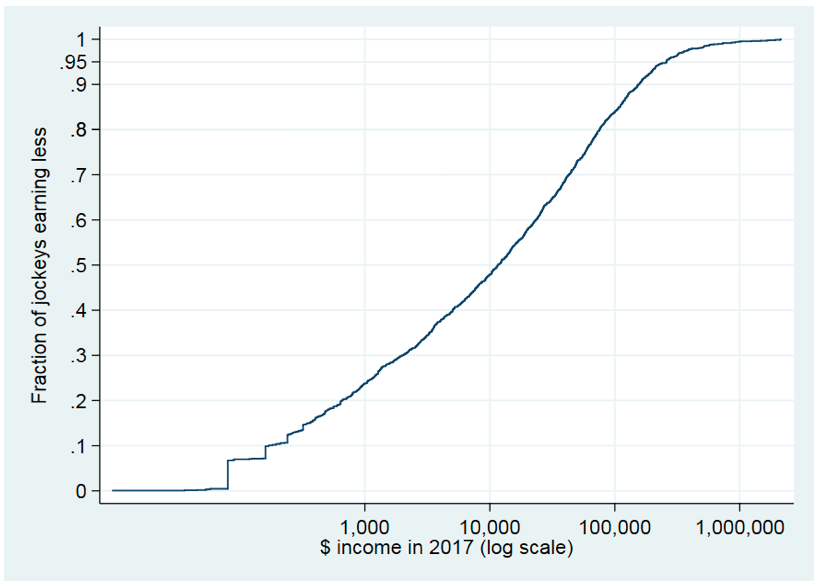 The most common index of inequality is the Gini coefficient, which for jockeys was .77 in 2017. That’s considerably higher than the income inequality among major league baseball players, who had a Gini coefficient of .62 (and a minimum wage of $535,000) in 2017. But perhaps it’s not fair to compare the incomes of all jockeys to the incomes of major leaguers. A lot of jockeys are effectively minor leaguers, who race infrequently on small tracks.

If baseball data included minor leaguers, its pay would be more unequal (and lower). Still, it may be inevitable for income to be more unequal in a sport that depends on prize money — like horse racing, tennis, or boxing — than in a sport like baseball, where athletes collect a salary.

Not much about jockeys’ incomes has changed since 2000. And perhaps not much has changed, except for inflation, since Mike Wallace interviewed Eddie Arcaro in 1957.

[1] $2.2 million in 1957 is equivalent to almost $20 million today, but Arcaro made most of his money before 1957. Before adjusting for inflation, I assigned his $2.2 million in winnings to 1944, which was near the peak of his career, between his two Triple Crowns.

[2]  In Arcaro’s interview with Wallace, Wallace assumed that Arcaro got ten percent of his horses’ prize money, and Arcaro didn’t correct him. I don’t know if ten percent was an accurate figure in 1957, but it would be an overestimate today.

Who are the highest-paid one percent, and how do they do it? Read part two here