Our Sire of the Week has had a major impact in astonishingly quick time – we are seeing just his fourth crop this year – but another stallion standing alongside him seems to have made a similarly fast start. James Willoughby investigates.

There were G1 wins for #1 Dubawi (Coronet, Grand Prix de Saint-Cloud) and #2 Galileo (Sovereign, Irish Derby), but there was only one choice for this award after the 41 races that counted towards the rankings were factored in: the sire with only those two giants of Thoroughbred breeding above him in the current world order, the mighty FRANKEL (+5pts, stays #3).

There simply hasn’t been a stallion to touch Frankel among those whose entire career we have been able to track since our rankings were first calculated in 2014. Frankel has lived up to every early billing we gave him as the fastest-rising stallion we have measured.

But is there a threat to this last particular status? And could it come from within his own camp? Step forward the most exciting stallion in world racing, Kingman.

This week, Kingman reached the 1000pt Performance Index (points) barrier when the hugely impressive Headman won the G2 Prix Eugene Adam at Saint-Cloud. This is double-quick time for a stallion only halfway through his second year with runners. Kingman is now ranked #45, and he is ascending by the week.

So, is the unthinkable thinkable? Is Kingman actually tracking faster than Frankel at the same stage? Is he on the trail of the Great One, as they rub shoulders at Banstead Manor in Newmarket?

To answer this question, let’s return to the rankings of the first week of July in 2017 – the same week in Frankel’s trajectory that Kingman is in now. This allows us to compare the two stallions at the same stage:

So, Frankel was 17 places higher after going 11-49 (22%) to the same point that Kingman is 8-38 (21%). Interestingly, Kingman has sired more horses who have reached Group level, though this is all incorporated into his Performance Index (Points), which is 9pts lower than Frankel’s was.

In fact, Frankel eclipsed the same 1000pt barrier that Kingman has now reached on April 23, 2017 – some two months faster than Kingman. So, even though it is close, we have to conclude that Frankel remains the fastest-rising stallion in TRC history – so far.

Frankel’s three wins this week propel him into joint-fifth in the table of aggregate wins by stallions in 2019 alone, updated underneath: 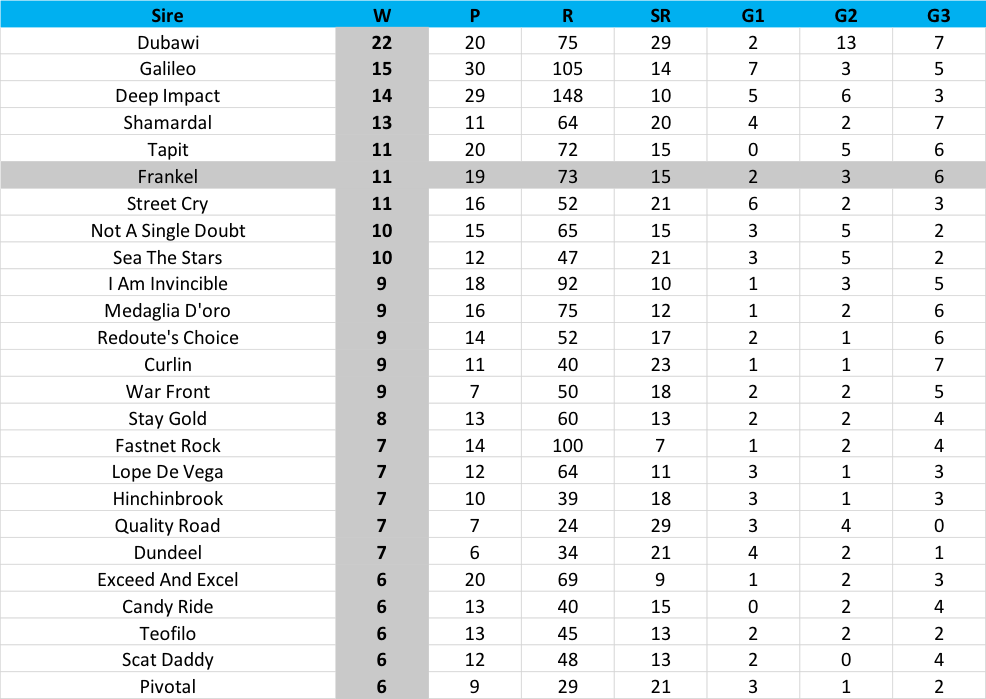 Before the year started, TRC Global Rankings had the same 1-2-3 as in the table above and also had Frankel in fifth !

This is how our Sires ranking stacked up when published then:

Changes to the Performance Index of the world’s leading stallions is shown in the rightmost column. Remember that, compared with mere wins, this is a highly sophisticated measure powered by a vast network of comparisons between stallions built up from every run in every Group or Graded race.

These paired comparisons are weighted according to their predictive power and then expressed on a scale that reflects the probability of a head-to-head victory in all clashes during the following week.

Some of the changes noted since the turn of the year may reflect nothing more than seasonality. Galileo, for instance, has had no chance to gain points from his crop of blue-blooded juveniles of 2019.

Other changes perhaps suggests a longitudinal, permanent change in the stallion’s success rate across the globe, perhaps because of mortality or a change in fashion status leading to fewer quality mares to service. It is always possible to explain away a dip in results, but a plank of science of prediction is that the older results become, the less likely they are to be reproduced.

While we use the idea of an ‘ageing parabola’ to forecast likely surges or falls in a stallion’s success, our model can be caught out when a stallion has a renaissance like that of Shamardal.

He was a former world #3 on TRC rankings, and, when we discussed the appeal of Blue Point as a future stallion after Royal Ascot, we showed how he would stack up in our so-called ‘legacy rankings’ if we were assessing stallions with no weighting towards more recent results.

Only Galileo, Dubawi and Deep Impact rate higher in the period we have covered.