As befits one of the ten richest races in the world, Sunday’s Japan Cup had quite an impact on the international racing scene.

Cheval Grand, who prevailed over Japanese Derby winner Rey De Oro and last year’s winner and six-time G1 winner Kitasan Black, was allotted a Racing Post Rating of 123, which was eight pounds better than any other winner last week. The 5-year-old represents something of a revival for Heart’s Cry. He is the best horse to have represented the son of Sunday Silence since 2014 world champ Just A Way.

If Cheval Grand had finished out of the first two and the race had been won instead by Ryan Moore on the Aidan O’Brien-trained Idaho (who finished fifth), the Longines crown would have gone to Moore.

As James Willoughby points out, 2017 has been a year of unprecedented achievement for Moore (that’s not even counting the six winners he rode at Tokyo racetrack the day before the Japan Cup), yet ironically he has failed to make the scoresheet on any of the world’s big ten richest races.

Neither for that matter have his main employers - trainer Aidan O’Brien and owners Coolmore Partners, both dominant throughout 2017 and both out on their own at the top of their respective global rankings categories. And you won’t find the name of their super stallion, Galileo, in the sires’ column in the table below even though he too is the clear world #1. 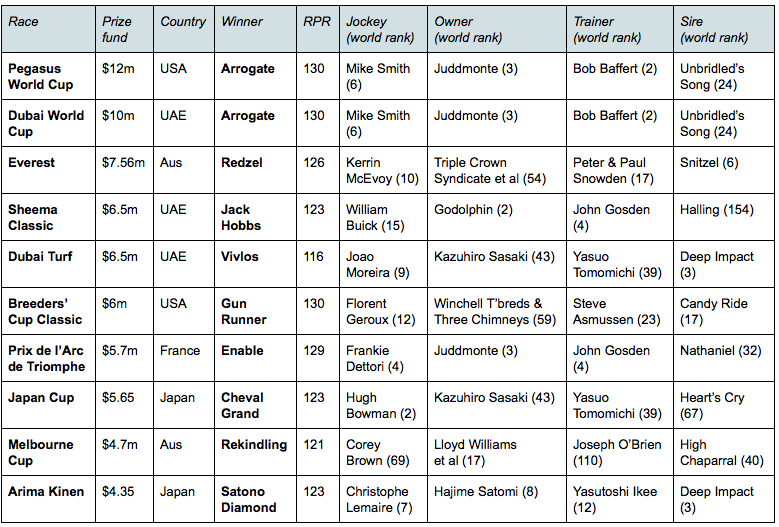 Ryan Moore has one more chance to land one of the big ten when the Arima Kinen is run at Nakayama at the end of December. There won’t be any Coolmore runners, but Moore is unlikely to be short of offers from Japanese connections.