The brilliant Hugh Bowman – long established as the #2 rider in TRC Global Rankings – fully deserves an award for his riding in 2017. Just not one that says “World’s Best Jockey” on it, at least while Ryan Moore walks the planet.

This year, Moore has had probably the greatest single season by a jockey in global racing history. How can the sport miss historical achievements like this?

The award given to Bowman, the Longines World’s Best Jockey, ratified by the International Federation of Horseracing Authorities (IFHA), came about because of arbitrary conditions: only the world’s 100 highest-rated Group or Grade 1 races count; the scoring system is 12pts – 6pts – 4pts for first, second and third; and the window is December 1 the previous year to November 30 this one.

If all Group and Grade 1s are not created equal, the IFHA should downgrade some of them. And a good place to start is Australia. (This suggestion has been made for years now by several Australian racing commenters, such as here and here, and the situation is only getting worse.)

First, leaving the IFHA’s arbitrary December 1 – November 30 period and the points system out of it, here are the Top 20 years by jockeys since 2011, sorted by the number of Group or Grade 1 wins:

And here is the data for just Group 1 wins, so that we can consider a jockey’s places too: 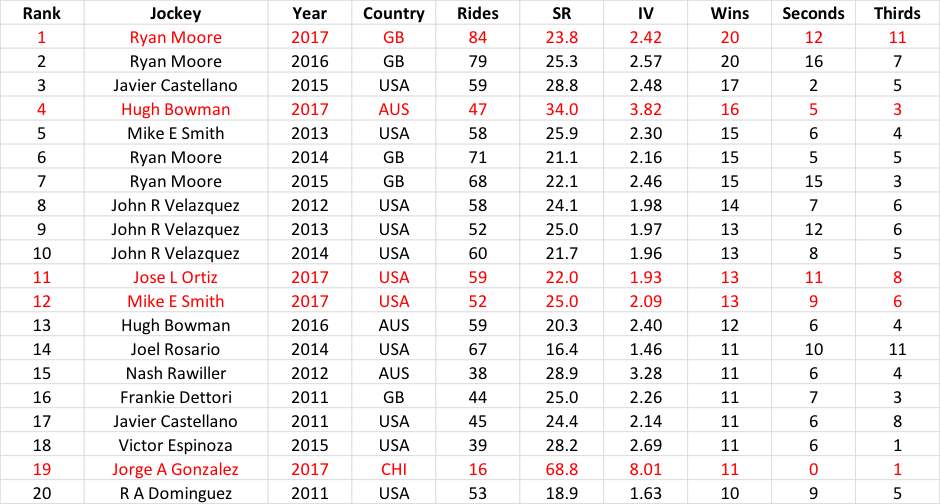 Let’s go over some of the data (any 2017 season is displayed in red). Table 1 shows that Moore’s 2017 season stands alone in the last seven years – and he may add to this record before the year is out. This last comment applies to Bowman too, but to date he has ridden a staggering 26 fewer Group winners than Moore, including four fewer at Group 1 level.

Table 2 fleshes out this record, showing that Moore has also gained seven more seconds and eight more thirds. No fancy formula is required here: Moore’s 2017 is superior to any other. It is true that Bowman has had far fewer rides than Moore, though his SR (strike rate) and IV (impact value) have been boosted by his partnership with Winx.

So, unless some Group 1s are not deserving of being labelled Group 1s (TRC Global Rankings does not care what the label of a race is but uses only the level of performance) then it should be obvious that Moore has had greater success than Bowman in 2017.

Incidentally the word ‘Best’ should have nothing to do with this award because it implies that an effect is being measured independent of the horse. Nobody knows whether Moore is the best jockey on the planet, but, as his status as long-time TRC #1 confirms, he is without a doubt the most successful.